I've just finished going over the newly released ENERGY STAR 2011 guidelines for new homes and, as you might expect, I'm happy about some of the new requirements and disappointed/perplexed about others. Overall, though, the program is moving in the right direction, which it must because building codes (specifically IECC 2009) keep pushing forward.

Here's what's new, compared to version 2 of the program, which was released in 2006:

When I became a certifed home energy rater in 2004, I asked David Lee of the EPA why they let giant houses qualify for the ENERGY STAR label. Yeah, I'm very familiar with the stock answer - these homes are going to get built, so why not help make them efficient. But I've always had a problem with ENERGY STAR qualified homes that are 10,000 or 20,000 square feet. 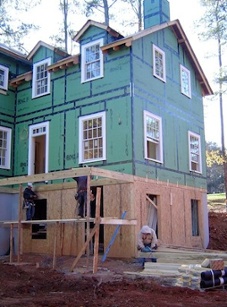 Heating, cooling, and ventilating systems have been perhaps the biggest hangup in qualifying houses. I just rejected a home this week, as a matter of fact, because the cooling systems were oversized. So now there are two checklists for HVAC (heating, ventilating, & air conditioning). One will be completed by the HVAC contractor and the other by the home energy rater. It's not ideal, and a completed checklist doesn't mean that the systems are all done correctly, but it's a step forward from where we've been.

The final checklist - the Water Management System Checklist - is one that's generated a lot of flack for Sam Rashkin, head of the ENERGY STAR New Homes program at the EPA. The intention is to ensure that the home deals with moisture issues with proper flashing details, grading, drainage planes, and other components.

A home with moisture problems may have lowered durability, healthfulness, comfort, and energy efficiency, so the ENERGY STAR folks are right to add this step to the process. One of the first things we teach students in the home energy rater class is that a house is a system, and you have to consider all the interacting components. Even though the word 'energy' is in the name of the program, it's all about making better homes, not just homes that are more energy efficient.

The Reference Design is a set of specifications, based on climate zone, that set a baseline for homes to qualify. If a home meets or exceeds each individual spec, then it qualifies through the prescriptive path. If it doesn't meet each spec, it can still qualify through the performance path by demonstrating through a certified home energy rating that its performance will meet or exceed that of the Reference Design Home. That is, the HERS Index of the rated home must be the same as or lower than the HERS Index of the Reference Design Home.

The reason for this change, according to Sam Rashkin, is that homes in different climate zones with different fuel types for the heating and cooling systems displayed widely varying performance. The HERS Standards were set up to be 'fuel neutral,' but in reality, that's been difficult to achieve. Hence the ENERGY STAR Reference Design Home.

So, there you have it. The new guidelines were rolled out last week and go into effect on 1 January 2011. The folks at ENERGY STAR learned valuable lessons from the rough transition in the upgrade to version 2. They've done a great job vetting the new guidelines and are providing plenty of time for the transition. Also, although it goes into effect on 1 January 2011, ENERGY STAR 2011 (version 3) won't be mandatory until 1 January 2012.

If you're a builder or are having a house built for you and want help with the process, you can contact us here at Energy Vanguard or go directly to one of our certified home energy raters. You can also check out our page on the ENERGY STAR New Homes program.

Will be interesting to find out what new training is required, how REM Rate will change, and how the new EStar program is integrated with existing green building programs. I don't think that LEED, EarthCraft, or NAHB will require version 3 by 2012, as far as I have heard. I think we are looking at a lot of confusion for the next few years, which, I suppose we could look at as job security, but we may also lose some clients in the process who just give up because certification becomes more complicated. One more thing, where did you get the photo of the modular home? It's one of my client's projects.

Update on LEED and Estar V3. I just reviewed the LEED for Homes 2012 draft for comment and it does require meeting the new version of ENERGY STAR, including all the checklists as prerequisites for several sections. It also looks like they are using the water management checklist to replace the ridiculous, subjective, durability management checklist in the current LEED program.