In the past two years, I've helped my parents-in-law make dramatic improvements in their home. Two years ago, I tackled their building envelope, encapsulating the crawl spaces, sealing the air leaks, isolating the mechanical room, and adding insulation. One year ago, I advised them on the purchase of their new high efficiency, sealed combustion furnace and variable speed air conditioner (photo left). This year, my task is air flow in the duct system.

When I did the building envelope work, they saw a dramatic reduction in their energy bills. Replacing their old, inefficient heating and cooling system, however, didn't have as much an effect on their energy bills as I expected. In the past six months, I've been learning a lot about the mechanics of air flow in duct systems and have started applying it to my favorite guinea pig: my in-laws' house.

So, last weekend I went over to their house and measured the static pressure. It was supposed to be no more than 0.5 inches of water column (w.c.), but I found that it was actually

1.05" w.c. Wow! When I took the 6" pleated filter out, that dropped it to 0.83", which is better but still too high. With the filter back in, I then measured the pressure in the supply plenum, which should have been about 0.1", and found 0.02" instead (photo right). That low pressure indicated a problem, too.

At that point, I wasn't sure about the best way to proceed with diagnosing the problem and prescribing a solution, so I called my friends at Moncrief Heating & Air Conditioning. Ken Briggs (photo left) came over today, and I got to watch him go through his 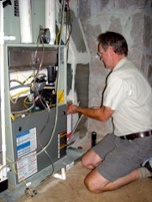 procedure for analyzing the problem. He verified my measurements across the blower and at the supply plenum and then measured at other points in the duct system.

What Ken found is that the static pressures on the return side of the duct system seem to be the main problem. They're way too high (or low, rather, since they're negative), indicating that the blower is pulling as hard as it can but isn't getting enough air. This situation can lead to two problems in the high efficiency equipment here: 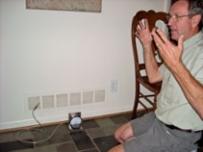 house entails modifying the return side of the duct system so that it moves more air. Here's what they're going to do:

Retrofitting an existing duct system can be a process of trial and error. After making the changes listed above, we'll look at the static pressures and air flow again and see if they were sufficient to bring the operating conditions back into whack. (Hey, if something can be out of whack, that must mean it can also be in whack, right?)

Before they get in there and do their work, however, I'm going to measure the actual air flow and see how far it is from what it should be. It's a 5 ton (60,000 Btu/hr) system, so the air flow should be about 2000 cubic feet per minute total. I'll keep you posted on this project as it proceeds.

Thanks for the real life example of the importance of duct design and the impact it has on the comfort factor and energy efficiency as well.

Looking forward to reading the update.

You're welcome, Todd. I've found that air flow is the biggest factor missing from home energy auditing protocols as well as HVAC protocols. Energy auditors focus on duct leakage and HVAC pros focus on 'the box' (i.e., the equipment rather than the ducts). There's a lot of low hanging fruit out there with bad duct systems, and unlike most energy raters are taught, it's not just duct leakage.

Good job again Allison. i encourage all my customers replacing equipment to challenge the contractor to leave written performance measurements comparing to specs, demo'ing it works like it should. Airflow tops the list. And another way to check it is blower amp draw......get back to you on finishing my HERS Rater someday...

I notice this post is over a year old ... what else did you find out?

I suspect if the total ESP is a hair over 1" as you found then the airflow may still be what it was prograammed to achieve.

ECMs are rated up to 0.9", and our informal testing shows they are usually flat curves up to about 1.1".

are you certain you were on the highest AC speed when you took the static readings? Most high end systems are 2 stage or "enhanced performance" and dont ramp up to full speed unless you force them to, what you have to do depends on the unit and type of thermostat.

2. Was the AC coil wet? Probably if you did it in Spetember in Atlanta. But if it was dry static will be even greater.

3. 5 ton ECM furnaces are notorious for NOT having flat blower curves ... even if programmed to say 2000 cfm they often only deliver only 1600 against 0.9" ... a little known secret of the box builders ... but freely on display if you study the performance tables.

I am having a new hvac system put in (it's part of a remodel). There is no airflow coming from the upstairs unit. How do I measure / determine how much CFMs should be blowing from the registers?

My last (really old) unit, I cold feel the air coming from every register, now I can barely feel anything.

Our air intake chugs--seems to be fighting to come on. It stops and starts over and over again before it finally blows air consistently through the house. Is this the same issue? Thanks

5 Sep 2012...new coil (frozen)last year; compressor last month...now can't get sufficient air on main floor of home; basement unit...good air; attic/garage extremely hot; any suggestions on who to contact here in laure, md...also, motorized attic fan with thermostat broke/not working..read your article that i should'nt replace with either solar or motorized...should i have whole covered up...air returns and supply at top of rooms, few on bottom...HELP!!!

Allison, again I have to say that your blog is really good. I have turned my students on to it in hopes that they will read the good information you are putting out there. I kind of got overruled the on my last comment that we need more code enforcement, as I still believe, but we definitely need more education. We try to make sure we teach airflow, one of the least known aspects in the HVAC industry, in hopes of making sure our students do a good job. I believe most don't teach it as they don't understand it. Anyway, I am happy to have found your website and blog. Education at it finest!!