It's Not Just the Box - High Efficiency HVAC Includes the Ducts

I realize that the deck is stacked against me, but I'll make another plea for HVAC contractors to stop putting crappy ducts on high efficiency heating and cooling equipment. Last week I looked at this issue with my in-laws' house. This week I revisited a house I've written about once before. Yes, this is where Stumpy, the amputated duct lived.

When I first looked at this house, the duct system was one of the worst I'd seen, and I recommended that the homeowners rip everything out and start anew. The correct way to do that, of course, is by going through the complete HVAC design process: Manual J, S, T, and D. That way, the equipment would be sized properly for the heating and cooling loads on the house, and the duct system would be properly designed to move the air efficiently. 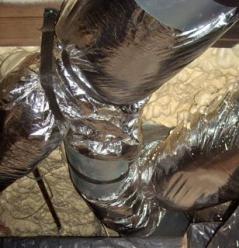 and 92+ AFUE furnace) and a typical duct system. What's there now is definitely better than what they had before - How could it NOT be?! - but their overall efficiency is brought down by the duct system.

The first thing to notice is that the supply plenum is almost nonexistent because it's so small. That's not so good for air distribution. A bigger plenum is better, so you can get the right amount of air going out into the ducts attached to it. The small plenum also means that the ducts are attached right at the edge of the end cap. 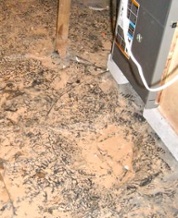 is in a dug out part of a crawl space that had flooding problems before the work, and there's evidence that the dug out area has flooded since, too (orange dirt on top of the black plastic in photo at left).

The radial flex duct system with a lot of Y-splits, as installed in this home, is the most common method of installing ducts these days because it's easy and doesn't require much thinking. It can work out if the system was designed and installed properly, and the static pressures and air flow are where they should be, but 99% of the time you see this type of duct system, it was installed on the spot without prior duct design.

In this duct system, the flex ducts were squeezed through several tight places (between pipe and floor in photo below right), which is an unfortunate procedure for duct installation that can drastically reduce air flow. There also was precious little mastic used to seal the ducts. What I saw was thin and incomplete, the kind of duct sealing you see when the contractor doesn't have to meet any kind of duct leakage threshold. 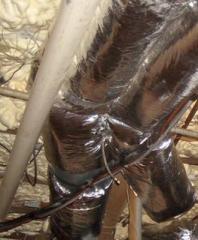 that the new ducts are a lot bigger than the old ducts, and there's a chance that the air flow may be OK. It's certainly got to be better than it was before - though that's setting the bar pretty low.

I didn't measure air flow, static pressures, or duct leakage in this system, but the new system is definitely a great improvement over their old ducts. With the open cell spray foam insulation in the floor, the house can't help but be more comfortable and efficient, and the homeowners are happy with the improvements.

My big problem with this whole scenario, however, is that the homeowners paid a lot of money for super high efficiency equipment and got an average duct system with it. They would have been better served by spending less on the heating and cooling equipment - the box - and more on the duct system. 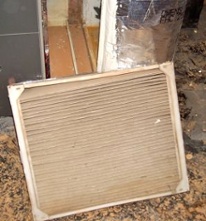 Looking through the photos I took this week, I found another one that I really can't omit. What you see at left is the filter, filter housing, and return plenum. Notice the red dirt all over them. That's from the flooding that happened in the past. So, the HVAC contractor installed a brand new super duper high efficiency piece of heating & cooling equipment with a not so great duct system - and then he throws the same old dirty filter housing and return plenum on it, too. Did he even bother to put in a clean, new filter? Amazing!

Do you think the house in the photos would have been better served to have closed cell sprayed on the floor to act as a vapor barrier against moisture that is obviously there from the flooding you noted?

I know some people like to use closed cell foam for that reason, Hunter, but I prefer open cell spray foam here because it won't trap water. If there's a plumbing leak in the house, closed cell foam will trap the water and possibly rot out the floor. As Leroy Sloan said in the RESNET group on LinkedIn, putting closed cell foam against wood can lead to problems because you prevent drying to one side.

Vapor retarders limit the diffusion of water vapor, but most water vapor crosses the building envelope through infiltration. In the South, diffusion isn't enough of a problem to worry about installing vapor retarders because the permeance of the assemblies we use is already high enough.

So, I do think open cell foam was the right choice here.

Many times you will find HVAC contractors charging high prices for the equipment (the furnace) and then on the products such as the insulation and other products where the homeowner doesn't know much about, charge less. That way they could still get a high ticket project and still be cheaper than their competitors. Good fix.

I have been reading page after page of your articles on HVAC. A lot of "what not to do" comments and pics were loaded, but you really don't go into the how's and whatnot's of what a good system looks like. Are Wye's not preferred over a different branching type? Can a plenum be too large? How does a homeowner check to see if his ducts are pushing enough air besides putting his hand over the vent?

Did you talk to the homeowner were they willing to pay for extra cost of doing the job correctly? I find duct systems the root of all evil in my area of the country and it is not the contractors it is usually the fault of the builder or the homeowner that don't want to pay for the right way.

I had a bigger plenum installed and new 7 inch ducking to my master bedroom for more compressed air. My bedroom was at 80d and now it's 76d. Big difference. Recommend you know you know who is doing the work. Just to much money nonessential cost if you don't need it

It's always to pick out problems with someone's work. Have you ever considered the builder that is the way he wants it or is willing to pay for. You fail to see we all know how to do Manuel J,S,D but if the customer isn't willing to pay for it but they want a system to cool or heat that is what they get. Most HO don't have a clue in what it takes to install a HVAC system the right way or even pay for it. I am not willing to work for free are you?

I've run ductwork, slung mastic, and otherwise did the legwork of hooking up equipment for a few HVAC contractors in my time. How much do you need to get paid to do the job right Larry? What if the electrician said, they don't pay me enough, so I'm going to not ground the system and hot wire everything without including breakers?

I believe getting paid for the work I do. If a HO told me he wasn't going to pay for a breaker then what are going to do install it and eat the labor and part or take it off the list? I went into business to make money and if anyone in business tells you differently they are not being honest.

Um... how would a HO tell me he wasn't going to pay for a breaker?? I give the HO a price for the work I know is required. He says no or yes. I don't start cutting corners to make more money or because I gave the HO a deal. If somehow a HO actually did come to me and ask, can I save money by having you not install any breakers, I would tell the HO no, and if he/she persisted, I'd say that the HO need find a different electrician. I see in your example that the two options you give, "do a shitty job" or "do a good job and not make enough money" doesn't include "don't do the job". And let's be honest here "I believe getting paid for the work I do." psh, HVAC techs are the most overpaid laborers on the jobsite. They do get paid for the work they do already. And the problems typically found with crappy duct runs and poorly insulated or sealed ductwork amount to laziness and poor craft. Typically the time it takes to do it right is no more than the time it took to install it wrong.