How Hot Is Your Roof? - Insulated Rooflines and Shingle Temperature

One of the most common questions I get when I describe homes with insulated rooflines is, "What does that do to the shingles?" Some roofing companies have made a lot of noise about this topic, saying that if the shingles can't conduct heat downward into the attic, their lifetime will be greatly reduced.

What's the truth about this claim? How much does shingle temperature really rise if the insulation is right at the roofline and the attic isn't vented? Fortunately, it's easy to find out because the Florida Solar Energy Center (FSEC) has done the research. 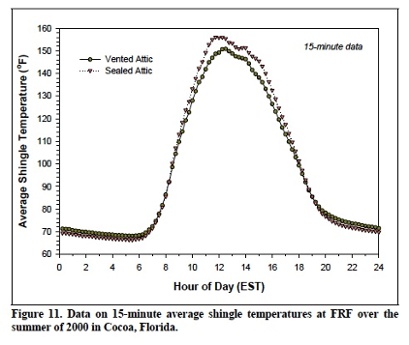 As you can see, the difference isn't that great. The graph below shows the temperature difference throughout the day: 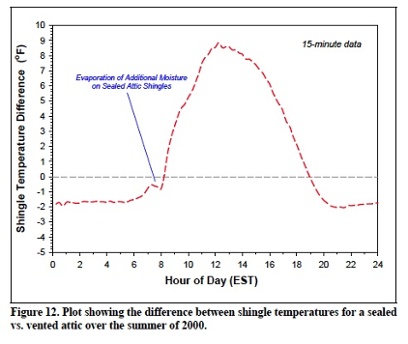 This FSEC study didn't look at shingle lifetime, but I think that adding 9 degrees to a temperature of 150 degrees won't make much difference. What kills shingles isn't so much the temperature. It's the ultraviolet radiation that they're subjected to all the time.

Here's a bit of anecdotal evidence for you. Southface has a building constructed with structural insulated panels that they built in 1996. The asphalt shingles have been on the insulated roofline for 14 years now. They also have a detached garage with a vented attic. There's no difference in appearance or performance of the two roofs.

Now, let me ask you ask you this - Do you know anyone who has ever collected on a shingle warranty? The answer is probably no. Even if it's yes, however, shingle warranties are structured so that you're not going to collect much if you do make a claim unless you have catastrophic failure in the first couple of years. An insulated roofline will have minimal effect, and certainly will not result in catastrophic failure.

Shingle photo by simplyrikkles, from flickr.com

Great post Allison. Another one to bookmark for future reference. I'm sure the question will come up again with my builders and clients.

Yes, this question comes up over and over in this field. Be sure to download that FSEC paper, too. It's got a lot of great info in it. The title is "Literature Review of the Impact and Need for Attic Ventilation in Florida Homes," but the research results they cite are from all over the place.

THX, Allison. DO you think that the answer would be any different for other roofing materials, a metal roof in particular?

Tom, I think metal roofs wouldn't show as big a temperature difference because they reflect a lot of the solar radiation. White shingles keep vented attics more than 15 degrees cooler than black shingles, and a reflective metal roof would do more than that. I haven't seen anything comparing vented attic to insulated roofline with metal roofing, though. The best would be a metal roof on an insulated roofline with a one inch air gap to allow venting between the roofing and roof deck. They call that a 'ventilated double roof' in the FSEC paper.

THX
I'll read the article. I have an insulated (closed cell) roof that needs its final finish. I have planned on standing seam metal. I have been reading up what Joe St. has to say, which is a lot.

BTW, dark roofs, way up here in the upper right corner of the US don't seem to have the same implications as where you are! :)

Very true, Doc. You need all the heat you can coax into your home in Maine, wherever you can get it from.

Another great post Allison. I'll be sure to download the report. This is the first question I get asked when I discuss the topic with builders. We insulated the roofline of our 84 year old home this Summer.

What about increased moisture content under the roof sheeting?

Out of the park with 3 guys on base!

Thanks for doing this Allison! So helpful!

I remember somewhere comments about color causing delta t of 30. Love to see that point in there.

9 degrees can make a huge difference if you were describing 1st -v- 2nd -v- 3rd degree skin burns. Why would it be much different with a roof shingle? I have a roof with a 2/12 pitch, aka hot mop roofing. It layed perfectly flat prior to open cell foam being installed against the underside. (No pebble protection) By August, the roof had more blisters and ripples than a man could count. Once the foam was removed from this area, the blisters settled but the damage was done.

Hi Allison, great article and great website, keep up the good job!
Was wondering if there is a good roofing solution for a country like Japan with cold and sunny winters (where you you want to get as much sun's radiation as possible inside your building) and darn hot summers at low latitude with frying sunlight.
Is there any strategy to change the albedo of the roof according the seasons? To block that radiation in summer, but let it in in winter?