Living with the Sun - Building Science in a Broader Context

I like the Sun! It's what got me interested in building science, actually. Growing up in the '70s, I heard a lot of talk about the environment, our energy problems, and solar energy. I didn't really do much with that interest until the '90s, though, when I bought a book called Heaven's Flame by Joseph Radabaugh and built a solar cooker out of cardboard and duct tape (shown at left, with the late Calli, the best dog ever, in 1995).

Whether you're into solar energy or not, you probably know that today is the winter solstice, the "Sun stop." It's one of four special days in our calendar that are reminders that we're part of something much bigger than the minutia we usually focus on in our daily lives. (The others are the summer solstice and the fall and spring equinoxes.) It's usually - but not always - on 21 December.

For anyone interested in buildings, it's also a reminder that we tend to ignore our place in the natural world when we construct buildings. In this blog, I've focused almost entirely on the building itself (air barrier, insulation, HVAC, dryer vents...), but every once in a while I like to focus on larger issues. Today, appropriately, that issue is the Sun.

website called Mystery Class, shows why we have solstices. This chunk of minerals on which life evolved revolves around the Sun, our nearest star. The Earth rotates on its axis, which happens to be tilted 23.5° relative to the plane in which we orbit the Sun. It's that slight tilt that gives us seasons, solstices, and equinoxes. Without it, we'd have boring climates that stayed the same year round. Because of it, though, we have hot summers, cold winters, colorful autumns, and gorgeous springs, which all vary in intensity depending on latitude and regional geography.

Building science doesn't start and end with the structure itself. One of the first things to do when designing a home is to integrate the house into its environment. If you're building in a development that's all laid out already, you may not have much choice here. To that I say, developers, it's time for you to get on board and learn how to lay out a community so homes in your communities aren't fighting the Sun.

The basic principle of passive solar design is to put most of the windows on the south and north orientations of the building. The east- and west-facing sides of a home should have minimal windows or have a lot of shading for windows on those sides. Of course, you also need to consider the local climate. If it's in a climate with cool summers, like Seattle, keeping the house from overheating isn't so important, so the east and west windows won't hurt you that much. Similarly, in Maine, you may want to minimize north-facing windows, but in Georgia, we like them because of the natural light we get without the associated solar gain.

The two photos above are from the house I built in west Georgia. The one on the left was taken on the summer solstice, the one on the right at the winter solstice. The front of the house faces south, and all the windows have overhangs that I designed so they'd provide full shade on all those windows in summer and full sun in winter. As you can see, the math I used to figure all this out really worked. 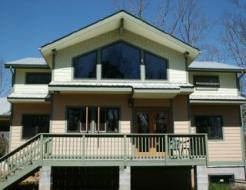 That was a great house! I spent two years designing and building it and three years living in it. One of these days, I'll get to build another one and again get a good feel for the change of seasons as the solstices and equinoxes come and go.

Glad you mentioned impact of climate on passive solar design. Here in the southwest, classic passive solar can backfire as we see a lot of mild days (mid sixties and higher) in winter (yesterday was 70). During fall and spring it's not unusual to see 80. But it does get cold at night (typically mid 30's, sometimes mid 20's) so it's nice to have a lot of unshaded east and south facing glass. You just have to be diligent about managing window coverings.