Peak oil has gotten a lot of attention over the past five years or so, though many still don't know about it and most who have heard about it, I suspect, don't believe it. The basic premise of peak oil is that petroleum is a finite, non-renewable resource. (Some people dispute even that, but let's leave their fantasy alone for this piece.) We've been tapping into it for about 150 years, and at some point we're not going to be able to produce enough to meet the ever-growing demand.

One common misconception is that all we need to worry about is how much of the stuff is left in the ground. Actually, though, it's the rate at which we're able to pump it out of the ground and get it to market that matters. Since about late 2004, that rate has been about 85-87 million barrels per day. The rate that we can produce it puts an absolute cap on how much demand we can satisfy.

The graph below shows clearly that discoveries peaked in the 1960s. All this talk you hear in the media about huge new discoveries...well, I've been watching those stories for the past decade, and you can see how they've affected the graph below. 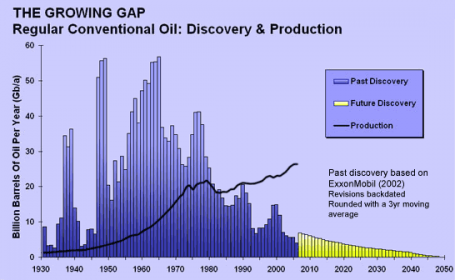 So, the question is, what are we doing to get ready? You can take this as an indication that the end of civilization is upon us. Or, you can look at the bright side.

Addendum: I just found the cartoon below on the ASPO-USA website, and it illustrates the attitude of some deniers perfectly. (Clicking on the cartoon takes you to Ed Stein's website.)

While I don't disagree with you, where does Iraq fit in this picture? Is it fully accounted for?

Terry, Middle East oil reserve numbers are difficult to know with much certainty, and most of them inflated their numbers a couple of decades ago. The majority of the remaining conventional oil is in the ME, however, and Iraq, I believe, does have quite a bit of what's left.

Your graph does not take into account the fact that there has been a ban on drilling in many areas that could deliver new discoveries. We could also get into the discussion about how much Natural Gas is sitting under North Dakota that has yet to be taken. There is no doubt that other forms of energy need to be explored and we need to get away from oil but the early peak oil alarmists had us running out already.

I always thought the global warming issue was a distraction from the reality of what is already draining the all of our resources from making any kind of progress to resolving issues. Such as the agriculture system that uses 10 times more fossil fuel energy to grow and process a crop to market versus the calorie content the consumer purchases. Our transportation infrastructure that has to reinvent itself in a decade or whenever the oil kingdoms prefer to do business with countries which we have exported all of our capital, making us a debtor nation.

Very interesting graph, however, can you cite your source? I have trouble convincing people without sourced information.

A--thanks for keeping this issue front and center. What we're seeing with oil prices now, based on the potential loss of just one small producer--Libya--tells the story about just how vulnerable the world economy is to oil prices. Sadly, despite years of talking about it and predicting peak oil's eventual arrival (whenever you choose to believe that date is) we have hardly scratched the surface of making ourselves a more resilient country and economy.

The other significant piece of peak oil related news in the last several weeks has been the Wikileaks revelations. Peak oil folk have long believed that the Saudi's were overstating reserves. Now that fear is supported in multiple cables and messages between embassies in the US and SA, from very authoritative sources.

Don,
Any drilling bans in existence have had negligible effect on discoveries. Do you really think they've affected the decades-long downward trend in the graph? (See, also, the cartoon I just added.)

George,
Cheap oil has allowed us to do many things we have to learn how to do differently now.

Elizabeth,
The graph is from the Association for the Study of Peak Oil (ASPO), started by Colin Campbell. The data, as indicated, are from ExxonMobil.

Peter,
You're welcome. Five years ago, this dominated my writing (and my thoughts), but I've gotten to a more balanced place with it now. You make a lot of really good points about peak oil, and it's nice to have others in the home performance community who understand the issue, too.