ACI 2011 - A Mad Review of THE Home Performance Conference

I've been struggling to write a review of the ACI (Affordable Comfort) conference since it ended on Friday. Inspired by Steve Byers's post, though, and my San Francisco sight-seeing tour, I'm going to dive in.

Steve, one of the principals of EnergyLogic, didn't write so much about the ACI conference as about the process of going to these conferences. Like me, he didn't go to a lot of the the sessions, so he looked at what happens when you go to conferences in your field year after year. Great piece, and you should go read it. In addition to being a terrific article, it also includes a link to some priceless advice on how to prepare for conferences. 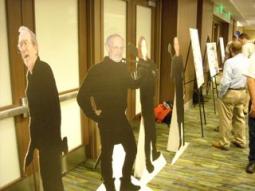 Speaking of experts, that was a theme of this conference, it being the 25th since ACI started. The organizers had put silhouette cutouts with the faces of 25 luminaries who've been speaking at the conference for a long time - people like Joe Lstiburek, John Tooley, and Tamasin Sterner. Walking through the conference, I'd see them placed strategically around the venue, sometimes pointing the way to the trade show, other times all piled up together.

San Francisco, the site of this year's conference, is a beautiful city. The weather turned for the better as the 2000+ attendees converged on the city - and then proceeded to spend all their time in the windowless bowels of the conference hotel. The conference ended at noon on Friday, though, and my plane didn't leave till Saturday afternoon. So, I made a plan. I headed out for a little tour of Chinatown, the Cable Car Museum, Lombard Street, and North Beach.

It was at that last locale that I started thinking about movements and change and intensity. Do you know where I went? No, no, no. Not the strip clubs that inhabit that area. I'm talking about The Beat Museum, which houses a collection of books, memorabilia, and 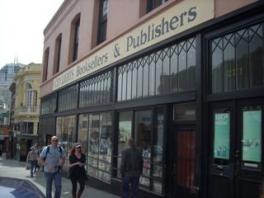 information about those poets, writers, and iconoclasts who make up what's called the Beat Generation - Jack Kerouac, Neal Cassady, Allen Ginsberg, and the rest.

Coming out of World War II in the late '40s, the US drifted into a happy daze of suburbia, shopping, cars, and television. Yet not everyone submitted to the allure of easy living. The Beats saw this new lifestyle, and the political and economic ideas that underlay it, as something to rebel against. Ginsberg expressed it most famously in his poem Howl, which begins:

I saw the best minds of my generation destroyed by madness, starving hysterical naked,...

I read On the Road by Jack Kerouac long ago and was so fascinated that I read several more books on the history of the Beats. Their intensity captivated my imagination and appealed to my idealistic side (which was most of me at the time). As I left the Beat Museum and wandered the North Beach area, thinking about their devotion to shaking things up, I pondered how this might relate to my time at the ACI conference and what I'm doing in my career.

"...because the only people for me are the mad ones, the ones who are mad to live, mad to talk, mad to be saved, desirous of everything at the same time, the ones that never yawn or say a commonplace thing, but burn, burn, burn..." (Sal Paradise in On the Road)

In the world of home performance, we're a bit mad, too. We see how houses could be, how they ought to be, how they have to be. We work as hard as we can to get our hands on as many as possible and transform them to our visions of building science perfection, with beautifully installed insulation and air barriers completely encasing the bubble of conditioned space containing the happy, comfortable, healthy dwellers of these harmonious homes.

Some of us, like myself, also feel compelled to do this because of what Jim Kunstler calls the Long Emergency, which is upon us now. Peak oil is here, whether we've already hit the peak of global oil production or not, the effects of peak oil are changing our lives already. Now we must decide how we will respond to the changing economic and social landscapes.

This is why I go to conferences. In the past decade, I've divided my conference-going into the home performance and building science events on one side and peak oil gatherings on the other. Mostly I do the former now because I feel that's the best way to get ready for the Long Emergency. I've seen enough data about oil and gas production. I'm driven now to help with this transition to whatever lies beyond the days of easy oil and abundant energy.

Fab post! Walking the stacks in the oh so lonely freshman year at the Air Force Academy, I discovered Kerouac's On the Road. We're all on the bus, Further to Long Emergency. It was at a Peak Oil conference that I first met Allison, many moons ago...

Thanks, Steve! Interesting that you're the first to post because I believe you're one of those people in my life whom I know only through conferences. I don't think I've seen you anywhere but conferences. And with our peak oil connection, maybe we should form some kind of peak oil/home performance sub-group to bring one of the biggest driving forces into the arena where we both make our living.

Groovy perspective on the neat beats & transformational, out of mainstream thinking & goals of HP folks! Hey I enjoyed mtg you at your social media class. I spent many growing up yrs in Eugene, OR, home of Ken Kesey & now in Nevada City, CA home of Gary Snyder, both beat guys. The culture in Eugene was a sure influence w/ environmental stewardship, creative artists, musicians, writers... & incredible beauty near wilderness, mtns & ocean.