News Flash: Americans Use Less Energy When It Costs More

I wrote about energy conservation versus energy efficiency last year and showed how things had stayed pretty level over the past three decades as we've spent our efficiency dividend on bigger houses and more electronics. Still, I had trouble believing we were actually using less energy per person than we did in 1970.

So I did what I always do when faced with a question like this. I went to the best source for energy data about the US: the US Energy Information Administration. Here's what I found (pdf): 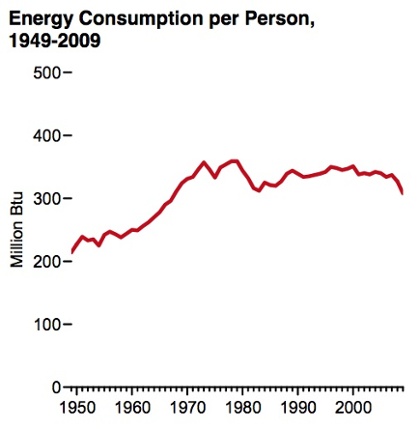 Indeed, we do seem to be using less energy per person than we did in 1970. Wow! The shape of this graph tells a lot of American history, too. There's the sharp increase of the '50s and '60s as we suburbanized and accessorized. Then the two bumps in the '70s showing the downturns after the Arab oil embargo of 1973 and the Iranian revolution of 1979. Then followed the slow rise in energy consumption of the '80s and '90s as our economy recovered and took off.

Then, at the turn of the new millenium, energy consumption flattened out and turned down. We started using less energy per person. The decrease is mainly coincident with the economic downturn of the past few years.

Another graph from this same EIA document showed our expenditures per person over roughly the same time period: 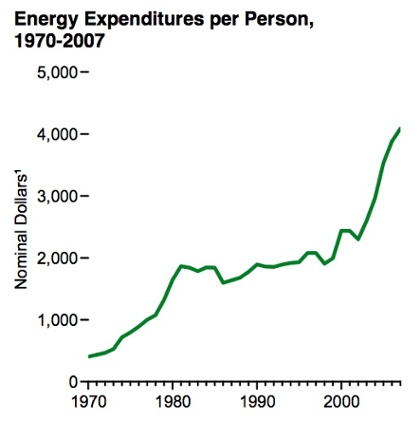 Well, there's the answer. Energy costs have been rising sharply since the year 2002. The only dip in the new millenium followed the attack of 11 September 2001, when the economy tanked for a bit.

The moral of the story: High prices influence behavior. The back story is that the days of cheap energy are over. Peak oil is a big part of the reason for that.

It's time we should stop thinking of OIL as synonymous with ENERGY. Oil is a uniquely valuable commodity, but there are other replacements if all we want is an energy source. For example natural gas is cheaper and cleaner, nuclear power is cleaner but seems to be more expensive... and there are those black-swan accidents to take into account. Plus there is potential from several newer technologies, yet to be proven scalable and cost-effective without subsidies. And "negawatts" from conservation are virtually another energy source. Each has its role.

What oil gives us as a commodity that is so very hard to replace, is its value as a vehicle fuel. A replacement commodity needs to be in liquid form to be attractive. Synthetic liquid fuels are exotic and more expensive than oil currently is. Some of them have far lower BTUs per gallon which is undesirable for vehicle range.

We can replace oil for stationary energy needs and it won't be so very hard. However I see oil being the commodity of choice for all sorts of vehicles, for many decades yet.

I am not actually disagreeing with you on "peak oil", just wanting to clarify this is a crisis of a particular commodity rather than energy in general.

I have a question about the previous article you referenced in your opening paragraph. The graphs show that site use has dropped while primary use has remained almost flat. Do you have any idea why this is the case? This implies generation and distribution efficiency has dropped, which seems counter-intuitive.

Unfortunately, this EIA forecast will no doubt be used to undermine efforts to achieve more serious reductions.

Mark: You make a lot of good points, one of the most important being that oil is mainly needed for transportation, which is why some say that what we're dealing with is not an energy crisis as much as a liquid fuels crisis. Rather than respond in this comment, though, I'm going to ask you to wait a bit till I can write a post on how far those alternatives can get us.

David: That's a good question. Could it be that our power plants have gotten further away from the population centers? Or that more of it's being exported out of the regions where it's being produced? It seems like generation has only gotten more efficient, so it must be on the distribution side.

Mark, I disagree that oil is the only energy crisis we face. Granted, peak oil is a crisis for different reasons, but don't CO2 emissions also represent a crisis?

And what about escalating electric costs? For 25 years, normalized prices for electricity remained nearly flat (except in a couple of states). This is no longer true. At the current rate, it won't be long before energy becomes the largest single expense in the average household budget, thus threatening our economy. I'd call that a crisis.

Allison, I believe distribution efficiency has been improving for decades, although at a relatively slow pace. I don't know about distance. If you can point me to the specific source data used in those graphs, I'll pop off a quick note to someone I know at the EIA.

I was mainly responding to the last couple of sentences in your post:

'...the days of cheap energy are over. Peak oil is a big part of the reason for that.'

So I thought we were talking about energy and "Peak Oil".

Allison, thanks for the data sets. I now understand what happened. Your site energy graph includes all fuels. However, the concept of site vs. primary only applies to electricity. So the unexpected trend (a drop in site energy per HH while primary energy per HH remained flat) almost certainly reflects a higher proportion of electricity in the total mix in 2005 vs. 1980 for this particular demographic segment (single family detached).

Checking the EIA website, I was only able to find primary vs site comparisons for 1993 and 2005, but at least in that case, the ratio improved slightly, as expected, reflecting gains in generation and transmission efficiency.