At the 2010 RESNET conference, I heard David Goldstein speak on some of the issues he'd written about in his newly published book, Invisible Energy. Goldstein is the Energy Program Co-Director at the National Resources Defense Council (NRDC) and president of RESNET, and in one part of his talk, he threw out some numbers that floored me. Really! (It made a terrible racket, as I knocked over a few chairs and had trouble getting up again.)

He was discussing the mortgage crisis that has gripped the US since 2008 and wanted to put the cost of buying a house in perspective. At the time he wrote the book, the median price of an existing home in the US was around $175,000. If the buyer put down 20% and financed $140,000 over 30 years, here's about what they'd pay over the life of the mortgage:

I don't know about you, but that middle number really kinda surprised me. I knew that those folks who were spending hours a day driving were were paying with more than just time and frustration, but for the cost of commuting to be nearly as much as they're paying for the house shocked me.

Also, I'd never really thought about these numbers before, so if he'd have asked the audience that day, I think I'd've guessed that utilities would add up to more than the cost of commuting. Now that I've thought about it, though, it makes perfect sense. Cars are dang expensive, and the more you drive 'em, the more expensive they are.

This is an example of how cheap and plentiful oil over the past century and a half has reduced our location efficiency. Those who do long commutes from the suburbs to the city are impoverishing themselves, but they've done it for what seemed like a good reason: The further outside the big city you go, the less expensive the housing gets. There's even a name for this - the drive-till-you-qualify housing market.

In the book, Goldstein gives other measures of location efficiency, too. For example, when he looked at the 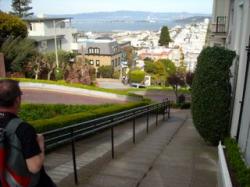 most location-efficient places in the San Francisco Bay Area, he found that the mortgage default rate was less than 0.1%, whereas out in the Bay Area sprawl, it was 2.5%. Whoa! Save all that money on reduced driving expenses, and you get to keep your house. What a concept!

Not only have you been more likely to keep your location-efficient house, should you have one, you've also suffered much less in lost value over the past few years of declining house prices. Goldstein found this to be true in major metropolitan areas across the US in addition to San Francisco.

Getting back to the main point, it turns out that location efficiency can be much more important than home energy efficiency. With peak oil, expect the cost of poor location efficiency to cause more and more financial pain. The drive-till-you-qualify housing market, which reduces our energy security, is coming to an end.

This is another article in our series on energy security.

*Actually, Goldstein just gave the cost of the house ($175,000), not the sum of their loan payments.

Traffic photo by biofriendly from flickr.com, used under a Creative Commons license.

Here's a link to a short, humerous animation about the advantages of urban living. It does a great job supporting your argument. http://newurbannetwork.com/video/13556/gated-community-vs-traditional-ne...

I never understood the 30 minute (or more) commute. This not only wastes resources, but wastes something even more precious - time.

I'd have to think long and hard before taking a job in an area where I couldn't afford to live close to work.

I think people generally do consider commuting and housing costs in their location decisions, but I suspect they underestimate the cost of commuting.

Best strategy is working from home, which more and more companies allow, and indeed many encourage.

BTW, climate is obviously another dimension of location efficiency. That was a major factor in my decision to move to Sierra Vista.

Janice: Thanks for the link. I'm seeing more and more of these Xtranormal videos lately.

David: Yep. Yep. Yep. Yep. I totally agree with everything you've said. I could never do the regular commute to a far away job. If I'm spending half an hour commuting, it better be on a bicycle.

Reducing driving is like giving yourself a raise. Since downsizing to one car, my wife and I have figured out we're saving about $7000/year, and that's living about a mile from work. We'd get rid of our other car completely if it weren't for family in the suburbs - Cincinnati doesn't have a carshare program yet, but we are getting a streetcar system soon :)

Chris H.: Yes, cars can be expensive. Kudos to you for giving one up and saving all that money. We have zipcar here in Atlanta, and I think it's fairly popular. It's a bit too far from where I live right now, though, so I haven't given up a car yet. I love streetcars, though! That's one of my favorite things about Europe. You can get around everywhere easily without having a car. I'm happy to hear that Cincy's getting them soon. That's great.