Rooms Not Getting Enough Air? This Duct Design Flaw May Be to Blame

When I was up in North Carolina this past summer, I went to a restaurant that had the duct you see in the photo here. You may not be aware, but this duct design has a fatal flaw. Well, it's not fatal in this application, but it can certainly lead to air flow problems. Can you spot it?

First of all, this is a supply duct trunk line, which sends the conditioned air out to the rooms that need to be heated or cooled. In this case, it's a commercial application with an exposed duct, and all the vents are just cut right into the trunk line itself. They're also all in the same room, and that's why the flaw here doesn't really create a distribution problem in this case.

It's possible, though, that you have a supply trunk line in your attic or crawl space or basement, and if it has the same kind of problem shown above, you may have rooms that don't get enough air from the air conditioner, heat pump, or furnace. (Of course, it may be more likely that you have a ductopus in your home.)

What's the flaw? See that vent on the very end of the trunk line? That absolutely should not be there. Think about the air flow. The blower is pushing air down that big duct. If that air gets to the end of the line and finds nothing to stop it, most or all of it will go straight out the end. 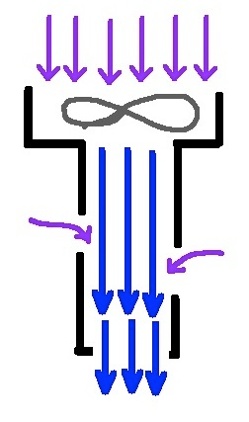 Even worse, there's this little sciencey thing called Bernoulli's Principle, which says that the pressure is lower in a moving air stream than in still air. With a moving air stream that's all heading for a grand exit at the end of the tunnel, any branches off to the side may actually cause air to move in the opposite direction that the duct design calls for. The air moves backwards!

In the diagram above, you can see this principle illustrated. If those three vents actually serve different rooms, one room is going to get way too much air while the other two actually get no conditioned air...if they're lucky. If they're unlucky, the so-called supply vent actually sucks air out of the room. The room may end up with negative pressure, thus pulling in unconditioned air, with all its heat and humidity or freezing coldness.

The takeaway lesson here is that trunk-and-branch duct systems should have no vents at the end of the trunk line (the end cap).

The Ductopus or the Centipede - Which HVAC Duct System Is Better?

What Is Pressure? - Understanding Air Leakage

I was just looking at a set of plans that has something very close to that. LOL.

Thanks for the reference on the principle.

As someone not versed in duct design, I would think a smaller grille at the end would behave properly. This is assuming someone knows how to calculate the proper size, or can afford a few rounds of trial and error with measurement. Please someone, critique this suggestion.

This article reminds me of the good old days when I installed irrigation systems. We repaired many long straight runs with no branches that were full of rotor heads. They were very common (easier/cheaper) installations, but the performance and efficiency was terrible. The head on the very end always sprayed with much more pressure, and the others in the middle were noticeably affected. Think cherub statue.

Do it right the first time!

It's not just the end-cap vent that's an issue here. Intermediate vents need a proper take-off, preferably a reduction trunk with curved Wye's. That will pretty much kill off Mr. Bernoulli.

Again, you are dead on. I thought that three feet from either end of the supply was the minimum.

I think it falls under "the path of least resistance rule.

The worst part is that someone probably paid actual money to have a "professional" install this. and - it looks like there is a transition down near the back wall to help increse velocity and make sure the Bernoulli Principle works even better. - good job!

Unless this was a really smart fellah that was using the same duct for (return air) and (supply air) .....

The real crime in residential design is contractors don't upsize to compensate for long duct runs. They typically use the same size duct no matter if the room is 5' or 30' from the air handler/furnace. Nor do contractors upsize duct runs for rooms with a lot of glass/exterior wall or cathedral ceilings.

We have one room with 3 exterior walls, cathedral ceilings, and a large window. It got the same 6" duct as the smaller room right next to it with 1 exterior wall and a normal size window. Upgrading the 6" duct to an 8" resolved the heating/cooling issues of the most part.

You can learn a lot about rules by asking yourself "what will be the consequences if I do otherwise?". Yet people often do not think about that. We know there is velocity pressure in addition to static pressure at the end of this run, and a full size supply will hog the air. But with higher pressure of any sort, what will be the consequences of a much smaller supply at that location? I submit it will deliver air as the customer expected, if sized right. I suggested this earlier and the responses indicated people were still thinking inside the box, that the consequences would be unimaginable.

M. Johnson: You don't want velocity pressure pushing air down the ducts. You want it going by static pressure. Yes, you can probably get it to work with a small vent on the end, but I think the testing and balancing part will take too long. That duct off the end also may be too noisy.

Jason P.: Yep, water and air are both fluids that follow the same rules. Irrigation systems & duct systems aren't really all that different.

Kasey: Yep, keeping registers off the endcap is best.

Bob: Ducts too small is one of the biggest problems in residential duct systems. It's usually worse on the return side, though, so that the total external static pressure is too high, and there's no oomph behind the supply air. Full HVAC design - Manuals J, S, T, & D - is the best way to solve this problem for new systems.

In this instance the same induction will occur with side mounted diffusers if the flow through downstream diffusers is large enough.

There is usually more than one way to skin a cat. A friend had a similar problem in a supply plenum, where a duct takeoff was on the end. This problem was solved by installing a flat plate in front of the duct to inhibit the velocity pressure.

While this raises questions as to the proper size and placement of the plate, it looks to me a valid solution. One advantage is it does not create a "dead air appendix" which the naive customer does not expect to see.

Ducts with branched distribution actually have to work on back pressure, so you can never have any outlets at the end.