Ten years ago, I was at the front end of building a green, high performance home. (That's me on the ladder connecting the two LVL ridge beams that support the structural insulated panel roof.) It was going to take only about two months from the time we got the foundation until we'd get our certificate of occupancy. And for nearly two years, that finish line stayed two months away, so I like to tell people that I built that house on the power of self-delusion.

But delusion isn't what I want to talk about today. I'd like to tell you about one of the big lessons I learned—over and over, as it turns out—during the process of building that house: Do things in the right order.

I don't remember all the painful ways that I had to learn this lesson, but here are a few:

I'm sure I learned to count even before I learned to read, but somehow I had to learn it again when I was building. When you do step 2 before step 1, you've got two options:

Thorough planning ahead of time is the key, something I didn't do ten years ago because everything was moving too quickly. Your planning needs to be based on knowledge and 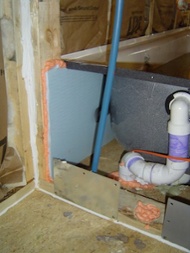 experience of construction practices and building science, more areas that I was deficient in at the time. (I'd never built anything bigger than a bookcase before I took on this project.)

Finally, you have to assign tasks to the proper trade contractors and schedule them at the right time. Sometimes you need to give a particular task to someone who doesn't typically do that job. For example, once the house is framed, the plumber comes out and roughs in the bath tubs and shower units. If they're on an outside wall, someone needs to make sure the wall gets insulated and sheathed before the tub goes in, and having the insulation contractor come out for this small job may not make the most sense. Many homes have cold bathrooms because home builders used to ignore this issue, and there's no insulation at all behind the tub.

Once again, the big lesson here is to plan ahead and do things in the right order. It's easier. It's cheaper. And you'll have a better house when you're done. This rule applies whether you're building a new home or fixing your existing home.

Alison, you're a brave man for owning up to all this. But it's laudable, because people only learn by their own mistakes and the mistakes made by others. We're all familiar with our own mistakes, but published pieces often exclude or sanitize real trial and error experiences. Also, people never accomplish anything of any significance without pushing hard beyond their current skill and experience levels. Think of all you've learned from this project and how much reporting on it benefits your readers.
There's also an old saying you reminded me of, which is sometimes worded as "early dollars are less expensive than later dollars", or something like that. But the key point is that it's better to invest heavily in upfront design and planning, and resist the urge to just expend energy right away, a valuable point that you also make very clear in this posting.

John P.: Thanks! I didn't get a chance to mention it in the article, but I heard Joe Lstiburek speak at a conference a couple of years ago about mistakes he's made, and there were some doozies. All his mistakes were from 25 or more years ago, he said, because the statute of limitations had run out.

THINKING is the hard part of construction, building is the easy. So easy, and tempting to jump right in with what you know how to do... so much more difficult to hold off until you have the whole thing planned down to the last screw.
Old military aphorism. "In the military running is a mental exercise, and thinking is a physical exercise." Makes no sense until you are exhausted, stressed, under supplied and you have to come up with at good idea.

John M.: Great points! Sometimes, circumstances force you to jump in too quickly, though, which is what happened to me. We got our construction loan had to get going right away. I really needed the help of a building science pro but didn't know any or even how to find one at the time. I think I also probably thought I couldn't afford one, but it turns out I could easily have paid for one with the mistakes I made. Hmmmm. That gives me an idea for another article.

Great article and being a builder, few people realize the amount of thought and planning that are required to make a project run successfully and smoothly. That's the key to making it work- thinking and planning.

Todd V.: Thanks! For those who've never built a house themselves, it's hard to imagine all the details you have to keep track of and the myriad tasks that have to be done - in the proper order. Planning ahead and doing things in the right order are absolutely critical.

A really fine "where the rubber hits the road" article.When my house was built, all the trades were given the plans to study.Then they met altogether for a charette( fancy name for a meeting) and worked out how to avoid problems that the designer had not foreseen.It wasn't 100% successful, but the sub-trades didn't whinge when things didn't work perfectly.

Mike L.: Thanks. Getting all the critical trades together ahead of time for a charette is definitely the way to go. Then the plumber can tell you why the water heater can't go there, and the HVAC contractor can point out that he can't run a duct through a steel girder, for example. If/when I get to build myself another, that'll be one thing I do differently.

Allison, brave man you are indeed. If only my better half could understand the thinking/planning part before I hear "just build it already!" Is that a fire-retardant LVL? If so, a crucial feature in a SIP structure I'd think.

Absolutely love the phrase "THINKING is the hard part of construction, building is the easy." and will have to use it in a future post myself. The example of the bathtub without insulation is perfect to show the problem here ... thanks for a fun & informative article.

Paul S.: Thanks. That was 10 years ago, and I really don't know if the LVLs had fire retardants or not.

Tina G.: Glad you liked the article and comments!

Would you like to tell me detail of install a piece of plastic pipe beneath the slab for a radon vent.
tub reglazing

Would you like to tell me detail of install a piece of plastic pipe beneath the slab for a radon vent.
tub reglazing