The 3 Types of Energy Efficiency Losses in Water Heating

Posted by Allison Bailes on November 4, 2011

This is the time of year when I start really appreciating hot water. We're getting a little bit of chilly weather, and those hot showers feel really nice in the morning. But that hot water that reaches me in the shower has only a fraction of the energy that went into the water heater.

(Yeah, I know that 8/3 and 17/5 and 4/2 are fractions, too, and if I were talking about fractions like those, the hot water would have more energy than went into the water heater, but let's stick with the conventional definition of fractions as being less than one even though you and I both know that that's overly restrictive.)

Firing losses are those that occur when you convert a fuel (natural gas, electricity, wood, kerosene...) to heat. The two most common fuels for water heaters are electricity (converted to heat through electric resistance strips) and natural gas (converted to heat through combustion). You can convert electricity to heat at an efficiency of 100%, so it has no firing losses. (Electric heat pump water heaters are a different animal altogether since they're moving heat, not converting a fuel.) Natural gas has a firing efficiency of about 80% in most water heaters.

OK, there's one more type of loss that I haven't mentioned yet. In addition to the three above, there's also the Stupidity Loss, as shown below. Believe it or not, it's actually worse than it looks. 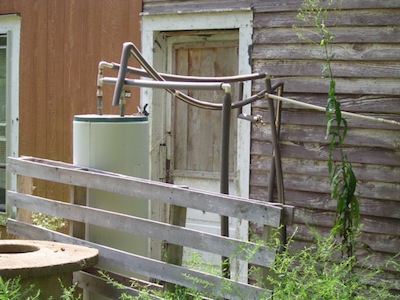 What about recirculation pumps that run on a timer to mirror the homeowners lifestyle? Is there any benefit/energy savings associated with this strategy?

The concept that electrical resistance hot water heat has no firing losses is not correct. The majority of the electricity produced on the grid is from fossil fuel and coupled with the transmission loss, the best efficiency one could expect would be about 33%.
I don't know how the DOE accepted programs which include the concept that electricity is 100% efficient at the meter unless the whole .gov is lobby-sided.

G. Reynolds: Yes, you're absolutely correct that if you consider the losses in making the electricity and getting it to your house, the firing efficiency would be about 30%. The site-versus-source discussion is certainly an important one, but in this article, I'm talking only about what happens on site.

Sure the tankless heaters are cool, but for most people the payback period is close to the life of the water heater. As long as the US government continues to subsidize energy costs these will be a long time in getting widespread adoption. Tankless is used almost exclusively in Europe where energy costs much more.

Then there is the service issue. Most plumbers know only the basic tank type water heaters because that's what 99% of homeowners have. Finding somebody experienced with a tankless setup may prove difficult in some areas. Hopefully manufacturers provide good support for their products, reducing service related issues.

Another option: electric tankless at the POINT of USE. They reduce water consumption, are hot fast, cost less than gas tankless to buy, and cost less to install (6ga wiring vs. venting to outdoors). If you are considering solar PV with net metering (can sell back to the utility) and can generate enough kW, you could potentially fire these high Amp devices for free.

Harris: With electric tankless water heaters, installing small ones at the point of use, as you mentioned, is definitely the way to go. I'm not a huge fan of electric tankless water heaters, but they do make sense in some applications. Powering them with photovoltaic modules gets around the generation and distribution losses of electricity that G. Reynolds mentioned above.

Efficiencies aside, electric is considerably more expensive (at least in Ohio). Electric water tanks are rare where gas is available, and electric-on-demand water heaters are like purple unicorns. Recent investigations into gas on-demand water heaters also hinted that they're not cure-alls. They need bigger flues and more combustion air due to the larger flames to heat water fast. They also cost more, require more upkeep, and might not keep up if someone showers while washing whites and the dishwasher simultaneously. But in the long run, they're probably more efficient (if the upfront costs are doable).

Go to central or south America and you'll find these "purple unicorns" all over the place. They're cheap, easy to install, and work well at the point of use. NOT a panacea, but a good option in some situations.

Would you suggest that PEX piping in a crawl space in SoCal be insulated? If so, both the hot and cold? Also, in regards to tank vs tankless water heaters -- I recommend tank, since they also are storage for potable water in case of interrupted service due to earthquakes or other natural disasters.

It seems ironic to me to have a PV system turn sunlight into electricity and then use that electricity to heat water. Perhaps I am wrong but would it not be more efficient to have a solar hot water heater? Would appreciate some discussion of this.

It seems to me what solar yields easily is low-grade BTUs, that is gross heat energy without high temperatures. Which is more useful for hot water than for many other applications.

M. Johnson - the irony is certainly there. Until you site the house on the lot for solar, design the house floorplan, systems, and roof structure, and max out Fed and local Tax incentives.

In our case (custom green homes) this is what we must run through. In the case of retrofit, most of the same rules apply... if you're roof is "this" big, can it sustain both solar PV and thermal? Then, can you afford a solar thermal system at $7000 (starting) or $700 (for TWO small electric tankless heaters) self-installed?

Thanks for including distribution loss--Gary Klein is my hero when he talks about this. And distribution loss can often dwarf the other losses (think about heating three gallons of water to get one cup of hot water).

I'll add another loss. Down the drain loss. Take a shower and use that hot water for a couple of seconds before letting it run down the drain. I've been happy with drainwater heat recovery.

Hey Allison, sorry to go off topic...just thought this might interest others

Are "short" tanks less efficient overall compared to standard-sized tanks? Or was that just the selection I was looking at...

I saw one 38-gal tank at a local big orange hardware store and it said 0.69EF, I was pretty surprised - just a standard draft hood model, no forced exhaust... how'd that get so high, I wonder.

So now are you going to get sued by the water heater manufacturers too? :-P

As stated previously, recirculation pumps waste energy, even if operated via timer and hw pipes insulated. A lot of heat still escapes. Gary Klein advocates high speed on-demand pumps that only operate 10 or 20 seconds at the time... just long enough to get hot water to the fixture. Also, button activation system is best. Motion activated pumps will operate unnecessarily.

On-demand pumps cost more than conventional circulator pumps, but since they don't require a return loop, the overall cost (in new construction) is actually less. For the same reason, on-demand can be installed in an existing home.

Good article on DHW efficiency. Someone mentioned the inefficiency of heating 3 gallons of water to get one cup of hot water. This is both a distribution inefficency and a User IQ inefficency. People that do not have point of use installations need to give some thought to their use patterns. If my bathroom is on the second floor and my DHW heater is in the basement, does it make sense to heat 3-5 gallons of hot water to wash my hands? At what point does it make sense to heat a cup of water in the microwave instead of running gallons of hot water to the kitchen to get that one cup.

A friend washes every dish as he uses it because he thinks it is more efficent than the dishwasher.

But a cold rinse and only using dishwasher when full is more efficent.

If that could be passively raised to house temperature (70deg) the heating load would be decreased by 1/3. This could be accomplished by putting a tank or pipe loop in the warmest room of the house (utility room or sunroom).

@Robert, good comments. I've found having on-demand pump for dhw makes you think twice about drawing hot water. After living with one for several years, we now only use hot water for shaving, showering and occasionally for washing dishes (if you don't eat greasy food, you don't need to use hot water). And my wife claims washing laundry in cold water is a no-brainer. YMMV if you have kids!

BTW, there's another reason not to draw hot water from the tap for consumption. Water heaters collect mineral sediment and grow various bacteria that thrive in warm, stagnant water. It might or might not be harmful but why risk it? Also, there's a certain yuk factor. And homes built before 1990 are likely to have lead solder. Hot water leaches lead from the solder.