It's 2012, and I'm excited about the potential of the new year. I went to Possum Drop to ring in this new year, and we burned another possum effigy, this one loaded with more fireworks than ever and dressed to represent the 1% of fat cat possums who dominate the 99%. Like the Phoenix, the Possum arises from the pile of ashes and regenerates itself for another year of adventure, excitement, and, occasionally, just rolling over and playing dead. (Well, not really. I just made that up, but it sounds good.)

2011 was a great year for Energy Vanguard, and I believe 2012 will be, too. Yes, the global economy is still falling apart, but, as I wrote in my first Letsblogoff post, the fact that the bubble of 'irrational exuberance' has burst actually gives me hope that we can make the changes necessary to find a more sustainable path.

It's a tall order, of course, because we must address the issue of growth. As economist Kenneth Boulding wrote, "Anyone who believes exponential growth can go on forever in a finite world is either a madman or an economist." I don't know if the current economic malaise represents the beginning of the end of growth, but I do know that, whether it happens in our lifetime or not, we will eventually have to give up this notion that the economy must keep growing 3% per year.

Speaking of growth, the Energy Vanguard blog has seen a good amount of it this past year. In my first post of 2011, I showed a graph of our organic search traffic from the beginning of the blog in March 2010 through the end of the year. Here's an update of that graph, showing March 2010 through December 2011.

I also published Energy Vanguard's 25 Ridiculous, Made-up Predictions for 2012, which you might find interesting. 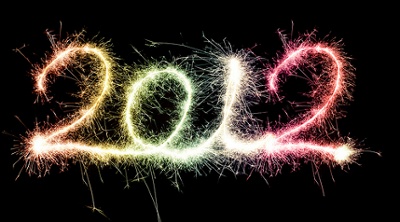 So, it's 2012 now. We had a successful year last year, both in the blog and the company, and we're looking forward to another one this year. We held 3 HERS rater classes in Atlanta in 2011, and I also went to Toronto and taught an abbreviated one there for the nascent HERS industry in Ontario. I hope to go back to Canada this year and teach more new HERS raters there, and we have our first class scheduled for Atlanta starting on 1 February.

We've also got a lot of great projects going right now and have just hired an HVAC design assistant to help. The ENERGY STAR Version 3 home we designed last year is nearing completion as well.

I've got great plans for the blog, too. My list of topics that I want to write about keeps growing, so I plan to keep writing about three times a week, as I've been doing, mostly on a Monday-Wednesday-Friday schedule. Readers will get another heavy dose of building science and home performance articles this year, as well as my usual silliness and somberness.

In case you haven't heard, I'm also writing articles for the Green Building Advisor blog, where my articles get to run alongside the great Martin Holladay's Musings of an Energy Nerd. If you're not familiar with GBA, hie thee thither and enjoy!

I'm excited to be presenting with

I'm excited to keep writing this blog and interacting with the many wonderful people who come here and comment.

I'm excited to teach more classes this year and be present for those special, Aha! moments when a student suddenly understands something new.

I'm excited that our website is getting a makeover by the Energy Circle design team.

I'm excited about going to a 5-day silent meditation retreat for the first time since '08. (Yes, that means no social media for 5 days!)

I'm excited to feel like Energy Vanguard is making a difference!

This article is part of the biweekly Let's Blogoff (letsblogoff.com) event, which brings people from all over the blogosphere to write about a common topic. We all offer our own take on the topic and always end up with an eclectic, fascinating collection of blog posts. Below is the list of other bloggers who participated in this one.

I'm a first-time poster on your blog though I have enjoyed reading here many times in 2011.

In the vein of bursting bubbles of "of 'irrational exuberance'" I thought I'd share a post from of one of my current favorite blogs, Tom Murphy's "Do the Math":

I hope you enjoy it.

Happy New Year to all.

Good news:
I'm existed this morning too. Why? It's a heating design temperature day today. ;-)

Bad news:
Even if adjust my furnace duty percentage upward to allow for a 68°F temperature, I still only get 33%. :-(

Bob @ Life of an Architect

You know I am a fan and I am very excited to see so many people find your site and all the fantastic information available here. I'd say "keep up the great work" but I already know that you will.

I typo, therefore I am.

"I'm existed" should have been "I'm excited".

Hi Allison and happy new year. I enjoy reading your articles. Hope you success in 2012.

Energy stuff isn't my line, but I love popping in because of your personality, especially your sense of humor. And you almost always write in a way that a layperson can understand! And I hope they invite John Poole to that science camp in August!