Ten years ago, I was in the throes of building a green home an hour outside Atlanta, Georgia. (Well, truthfully, I was in the throes of depression because my dad had just died, but that's another story.) In the process of building the house, I had to work with a lot of trade contractors. Some were good. Some were bad. None had any experience with green building. And I learned a lot.

The owner of the company was gruff and arrogant. He seemed competent, but he never got a chance to finish the job. I've been the recipient of angry words before and since, but the day he yelled, "You f#$@ed up!" at me without good reason was the day I decided I would pay him for his work to that point and send him on his way. My next plumber ended up repairing a lot of mistakes those guys left for me. 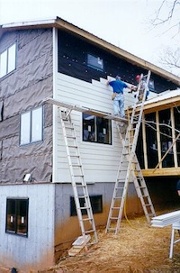 arrogant. I could barely understand his strong Georgia accent on the phone, and he didn't do everything the way I wanted it done. But he arrived early in the morning, made things happen, and had high standards for his workers. By the time he had packed up all his forms onto the trailer and rattled off down the driveway with them, I had a lot of respect for him.

Next, I had them frame the carport and back porch next, two jobs I could hardly face in February 2002. I'd just returned from Houston after spending three weeks there when my dad died. It was a difficult time.

In March 2002, the Sun and my spirits were coming back. JW and Jeffrey put the Hardieplank siding on the house, and that's when I gained tremendous respect for them. They did a fantastic 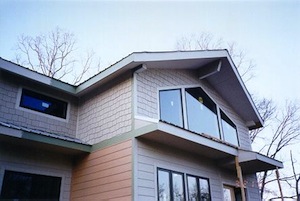 JW and Jeffrey became my go-to guys after that. They came back to help me with the tongue-and-groove pine ceiling that summer. It was going too slow with just me and a helper, and I knew that as soon as I started trying to cut and fit pieces around the valleys, I'd be going even slower. I called them, and in two days they'd completed not only all the ceiling boards around the valleys but had wrapped all the LVL beams with birch plywood, too. 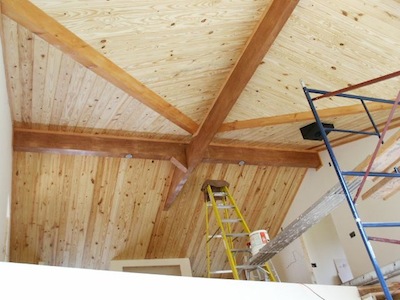 Building a green home out of structural insulated panels is weird enough, but when you're doing it in a fairly rural area with contractors who know little or nothing about green building, it takes a lot of patience and flexibility. I had to let go of some things I wanted (concrete with 4" slump, for example), but I learned that when I respected the skills and abilities that contractors brought to the job and I explained my goals to them clearly, the results were usually more than satisfactory.

People who work in the trades are a mixed lot, like most groups. Some are not so smart and some could've gotten doctorates (or perhaps did). Some are petulant (like my second plumber) and some are the nicest people you'll ever meet. If you check their references, give them a reasonable scope of work, and communicate clearly with them, you can build a green home even in a rural area with non-green trade contractors. You may also, like me, learn a few tricks from them and respect the good ones enormously by the time your project is complete.

The sad part is "contractor" has such a negative connotation nowadays and much of that is brought on ourselves. Contractors think that in order to sell their services they have to bad-mouth the guy that was there before them. Sometimes (not all the time) there was a reason things were done a certain way that is hard to understand but may have made perfect sense at the time.

We make it our policy not to bad mouth other people that were there before us. If a problem exists, we are there to fix it, no more, no less. No reason to drag others through the mud.

We had some similar experiences building a NZE house in the hills of upstate New York. Some contractors exceeded our expectation (cellulose installer) and others knew their craft well (HVAC), but required constant reminders of what we were trying to achieve. Coordinating structure, plumbing, venting and ducts was mental overload, but planning, modeling and copious communication were essential for us. Things didn't always go the way we planned, but the on-site resourcefulness of a few of our contractors made everything possible.