I was rereading one of Joe Lstiburek's articles last week. The man has a way with words (and I'm not just talking about the four-letter ones). This article was called Understanding Vapor Barriers and is perhaps the clearest, most direct explanation I've read on the topic. It's got some nice Joe-quotes, too, of course. Here's one:

It is frightening indeed that construction practices can be so dramatically influenced by so little research and reassuring indeed that the inherent robustness of most building assemblies has been able to tolerate such foolishness.

If you're involved with construction, you really need to understand this topic. When I started building a house a decade ago, I didn't understand it. Fortunately, I talked to people who did, so I didn't make a stupid mistake like putting a sheet of plastic in my walls. I'm not saying you shouldn't do that (put plastic in your walls, that is, not make a stupid mistake). If you're in a cold climate, you may well want plastic in your walls.

But today, let's look at what a vapor retarder is and what qualifies one to be a vapor barrier. The diagram below shows a house full of humid air surrounded by dry air outside. The Second Law of Thermodynamics tells us that the water, even in vapor form, tries to seek out drier places, so we can say there's a vapor pressure here from inside to out. 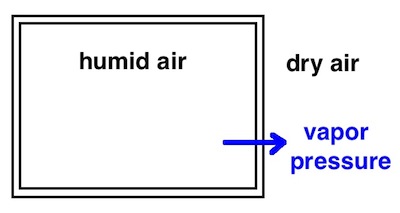 Because water vapor can diffuse through solid materials, it can find that drier air. The problem is that water gets inside the building assemblies as it moves. If enough gets in there, it can start unintentional biology experiments (see photo below). If it finds cold enough temperatures, it can condense. You don't want that. That's where the use of vapor retarders comes in...sometimes.

Every material has a greater or lesser ability to allow water vapor to diffuse through to the drier side. Another bit of confusion creeps in here, though, because we can specify that ability as either the material's permeability or its permeance. Both tell how easily 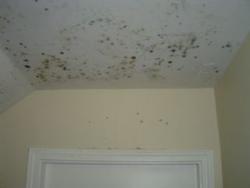 water vapor moves through a material, with higher numbers indicating more movement. The difference is that permeability doesn't depend on thickness and permeance does. It's the same as the difference between density and weight. Permeability is like density. Permeance is like weight. The former is an intrinsic property. The latter is extrinsic.

When you're studying the properties of materials to use in construction, you'll often see a perm rating. That's short for permeance, which means that it already factors in the thickness. For example, if you're thinking of using some extruded polystyrene (XPS) foamboard insulation in your walls, you'll find in your research that one particular brand says the perm rating drops from 1.1 to 0.7 to 0.6 as the thickness goes from 1" to 2" to 3".

In other words, as the thickness increases, water vapor has a harder time making it through, and the perm rating drops. That makes sense. So, materials with lower perm ratings are better at retarding the movement of water vapor. If the perm rating is low enough, we call the material a vapor retarder. If it's really low, we call it a vapor barrier.

The International Residential Code (IRC) updated its definition of vapor retarders in 2007 to include the three classes that Joe mentioned in his 2006 article.

The class I vapor retarders are also called vapor barriers because they pretty much stop the movement of water vapor. If the perm rating is greater than 10, it's not considered a vapor retarder. It's a permeable material.

Now that you have the basics down, you can start studying the really important stuff like whether you should use a vapor retarder in your climate and in the types of assemblies you use. For more on that last bit, see Joe's article that I mentioned at the beginning. He details 16 different wall assemblies, describing their properties and what climates they work in. Really, you should go read the whole article.

I know that vapor retarders/barriers are impossible to talk about in a couple of hundred words, but what I have found most important to understanding the damaging effects of vapor are understanding what role temperature plays and also the importance of the vapor barrier location within the wall assembly. Allison, you rightly point out that this is climatically relevant. Thanks.

TC Feick: You got it. My purpose with these articles is to focus on one little piece at a time. In this case it was just the definition of vapor retarders. I'll get into climate, temperature, and condensation in a future article.

Great article, and looking forward to the follow-ups.

Oh, and I like the 6/6 double-hung and 6-lite casement windows...is that the house you built?

John P.: Thanks! No, the photo at the top is a house I did some consulting on a few years ago. It's a modular home in Marietta that was, I believe, certified as LEED Platinum. The Green Curmudgeon (aka Carl Seville) did the HERS rating and LEED certification.

Is permeability related to 'air barrierness' too? Or can very vapour permeable materials be air barriers?

I am confused on this. Maybe it is obvious, just not to me.

Having just read the reference in Lstiburek by RL Quirouette (ignoring the Canadian VB on warm side preference) I am now much clearer.
http://www.nrc-cnrc.gc.ca/obj/irc/doc/pubs/bpn/54_e.pdf

Thanks for spurring this reading!

Paul P.: Well, I'm glad I wasn't able to respond more quickly then. It sounds like you went and got a much more detailed answer than I would've given you.

For those who don't want to go to the detailed source, the quick answer is that infiltration can allow a lot more water vapor through than does diffusion, so air sealing is the first priority in keeping water vapor out of building assemblies. And yes, most vapor barrier materials are also good air barriers, when sealed at the edges and penetrations. Diffusion and infiltration are different processes, though.

Its worth at least mentioning variable permeability membranes that are now coming on to the market - clearly the way forward, especially for zones like 4 which has such a wide range of conditions, including humid summers and cold winters in the same locations.

Hence the futility of faced batts, and the confusion wrought by house wraps, and now taped sheathing...

Greg LV: Thanks for the tip on the variable perm materials. We have pretty much the same problem as you here in my part of climate zone 3. Also, thanks for elucidating the other side of vapor & air barriers. House wraps and taped sheathing have high perm ratings (15-50) and are definitely not vapor retarders. The OSB or plywood that they cover has much lower perm ratings, with 1/2" OSB being a class II vapor retarder and not too far from being class I.

I love this subject! One of the greatest failings of the ICC was to properly develop a code with any kind of understanding of material properties as it relates to vapor drive, diffusion, adsorption, etc.

The barrier concept, was a tragedy. However when the change was made to retarder, no requirement to remove the barrier materials (poly) was made.

Even worse, there is still no discussion about adsorption at all, and that is a fundamental part of the equation. It is of particular concern when we talk about remodeling and start swapping out a portion of a component in an assembly. 150 SF of plaster and lathe is removed and replaced with gyp-board, somewhere else some redwood sheathing is replaced with plywood. Pretty soon the performance characteristics of the home have changed enough that the tolerance of the system is weakened, and failures begin to occur. Was it a vapor retarder problem or a materials properties limit?

Nothing is ever simple, not in nature at any rate.

This is a thorny problem. Would someone address the issue of roof membranes and whether an ice water/shield over the entire rrof deck makes good sense, or does the use of a vapor permeable membrane, v.z., DeckGuard in combo with the ice shield on eaves make sense? Is not an asphalt shingle vapor impermeable? What about the wood or plywood deck?

Insulating basement poured 8" concrete walls to finish my basement. Looking at John Mansfield AP Foil Faced Polyiso Foam Sheathing 2"'x4'x8' boards to cover insulation (R13) plus vapor retarder and radiant heat. Will the Polyiso board installation directly to the concrete wall create any water or vapor issues once the framed wall is covered with dry wall?