Smart people in the home-building industry have a saying about codes: A code-built house is the worst house allowed by law. The implication behind that statement is that if all you're doing is meeting the code, you're probably short-changing the people who will live in the house. The folks at the International Code Council (ICC) are doing their best to make sure that that barely-legal house is worth living in.

If I told you that your new home had to meet the following requirements, would you call that a high-performance home?

I'd definitely call a home built like that a high-performance home. Those specifications are part of the 2012 International Energy Conservation Code (IECC), which you can read more about in Martin Holladay's 2012 IECC overview. The 2009 IECC was a big step up from 2006, too. When we adopted IECC 2009 here in Georgia, we instituted mandatory airtightness and duct leakage testing, so we're a step ahead on that requirement.

So, if the energy codes are getting so much better, what will happen with energy efficiency programs like ENERGY STAR? Since the mid-1990s, more than a million new homes have qualified for the ENERGY STAR label. The reason the numbers are so high is that the program set its requirements to an attainable 15% better than the energy code. As the codes get more stringent, ENERGY STAR gets more stringent, and home builders have begun to reassess their priorities.

Is it possible that 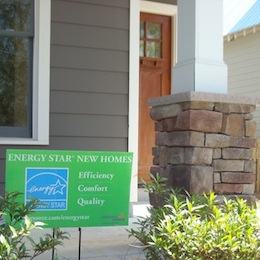 for the many builders who have participated in ENERGY STAR and had their homes labeled with the well-known brand, satisfying the energy code will become sufficient? Will only the extreme programs, like Passive House, survive?

I answer that question with an emphatic NO. It boils down to two words: adoption and enforcement. The IECC is a model code, meaning that it's just a suggestion from the ICC. If no one adopts it, it's meaningless. For those jurisdictions that do adopt it, the code is only as good as its enforcement.

Even if the requirements were exactly the same, I'd take an ENERGY STAR Version 3 home over an IECC 2012 home. The Home Energy Raters who qualify ENERGY STAR homes, on average, have more training, knowledge, and skill in the process of verifying compliance with energy efficiency requirements and in finding building science problems than those who do building inspections for code. They also are subject to quality assurance rules that have someone looking over their shoulder and checking their work.

That's where we are right now anyway. The ICC is pushing hard, and states are getting their acts together. I hope that eventually the people who verify energy codes will have to meet similarly stringent training and quality assurance requirements as HERS raters.

If and when we get to that point, my answer to this big question may change. What do you think?

Matthew C. Thanks! I fixed that in the article.

Also interesting that duct tightness is addressed in the Mechanical codes and not enforced.

Allison, as always, you hit on another good topic for anyone interested in highly performing homes. This code or later ones will eventually become law of the land, but some states and municipalities can lag up to a decade behind. Your second point, that of enforcement, is one that I picked up on when reading IRC '09. That code made no mention of who would conduct the blower door test. An assumption would then have to be made that anyone who posessed the equipment and could generate a result could certify. I am sure your state corrected this, but ours has not. As of now, total envelope leakage rate remains an alternative compliance path to visual inspection in Pennsylvania.

Until the HVAC contractors start applying the science of their industry, we won't come close to what is needed.

In PA it is worse than it appears in your comment. After PA adopted the 2009 Code, (1/1/10), there was a study that commented: in Pa about 15% of jusisdictions require third party verification of duct tightness, a slightly larger share of jurisdictions check during plan review but do not follow up with complete inspections while about 50% of jusisdictions pretend the Code has not changed from 2006. Add to this the fact that the home builders lobbied Industry and Trade (committee responsible for Building Codes) to put off adopting the proposed 2012 Code until at least 2016.

If you want an energy efficient home in PA, you need to go with an energy program with third party verification.

Unfortunately, there are those in the home-building industry that distort costs associated with code changes. For example, this article quotes the HBA in Illinois purporting that blower door testing, duct leakage testing, air sealing, duct mastic and Manual J development will increase a house cost by more than $2500! Anyone getting $1,000 to perform blower door and duct-blaster, PLEASE tell me where so I can come get my cake and eat it too! While I am there, the $500 they say it costs to run a Manual J will buy me a nice Bordeaux to wash down my dessert!

What is the reason in Building Science that airtight construction is more important in cold climates? I hope your reply addresses at least latent vs. sensible heat load.

Each state must achieve 90% compliance to the 2009 IECC or equivalent by 2017. This was part of the American Recovery and Reinvestment Act of 2009. And ALL states accepted it.


Another added requirement by the 2012 IECC that was not mentioned is that it also prohibits the use of building cavities for return air vents or plenums. This will cause many builders to simply eliminate them altogether by using central returns that are noisier and require bypass vents to the hallway that sacrifices privacy. Is this an improvement?

Thanks Neal, I knew Texas was sitting on the fence & maybe 1 other one so I wasn't sure they went ahead with it or not.

I agree, enforcement is the key to staying ahead of the codes. By the time 2012 IECC is in place in most states, we'll be on ESv4.

The DOE Builder Challenge program recently underwent a major face lift to stay well ahead of the codes, and even ESv3. Check it out.

As for central returns, that's absolutely the best approach, but as Sean said, it's not the only way to lose wall cavity returns.

In general, the less return ducts the better. If furnace or air handler is inside (as it should be), there's no need for any return ducts. Transfer grille work well, and jump ducts for bedrooms for privacy. This is less expensive than a fully ducted return system, although a bit more than an undersized central return in a hall ceiling. In any case, integrating wall cavities with ducted returns should indeed be banned.

Great article, really made some good points. From the standpoint of a home remodeler and weatherization business owner, you really hit the nail on the head with third party verification. Just because building code "says so" does not stop drive by inspections and cronyism among builders and inspectors. When a HERS RATER comes through a home there is a chance that any project will be slected for Q.A. audit which means his/her work as a RATER will be inspected yet again.

This is a huge advantage for the client/homeowner and those who truly love building science and want to see home perform.