Keep Your Elbow Rigid — A Lesson in Flex Duct Installation

Flex duct. It's ubiquitous now in homes with forced air heating and cooling systems. It's easy to install. It's cheap. The installer can show up and rough in a whole duct system without ever having seen the house before and without having a duct design. I'm not saying that's a good thing.

I'm not opposed to flex duct. I think it can work just fine if you have a good design and install it properly. That means supporting it properly, pulling it tight, not running it up high in an attic, and actually, not even putting it (or any kind of duct) in an unconditioned attic. Today I'm going to point out another common problem with flex duct, and this one has a simple solution.

A run of duct has the job of moving the air between the air handler and the vent. On the vent end, it connects to a boot, usually made of sheet metal. If a piece of flex duct is coming in horizontally 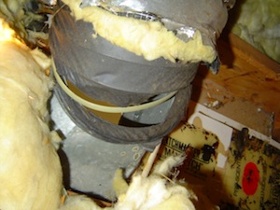 and the boot opens up vertically, the installer usually turns the flex duct to make a 90 degree angle right there at the boot.

As you can see in the photo at right, that puts stress on the flex duct, which can lead to failure. See the big rip in the liner of that piece of flex duct? That's in an unconditioned attic near Atlanta, Georgia. Attics get pretty hot in summer here and cold in winter. Except near that boot, which was blowing conditioned air into the attic. 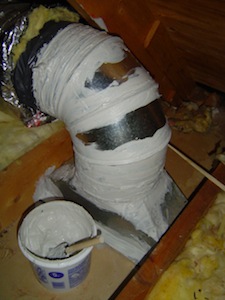 When I saw the house, the boot was already there, installed through the finished ceiling. In that case, the easiest thing to do was install a rigid elbow, which I did. Now there's no stress on the flex duct liner there. The leakage is fixed, because I covered all the seams and joints with a thick layer of duct mastic, my favorite way of sealing ducts.

That vent also gets more air flow. The stress and potential for failure isn't the only problem with turned-flex connection. It often restricts the air flow as well, so by using a rigid elbow in this case, the room below gets more conditioned air.

It's not difficult to avoid these problems. As Joe Lstiburek likes to say, most of the trouble arises because we keep doing stupid stuff.

Should Flex Duct Be Banned by Green Building Programs?

Another big problem with flex is the amount they use. Instead of trunk/branch, many installers run a separate line to the air handler for each register. This makes the install look like the picture above. IMHO if you must run ducts in unconditioned space try to keep the total surface area of the ducts as low as possible. If multiple registers are close to each other run a large duct to that area and split it up into smaller ducts. Upsize "trunk runs" for registers that are far from the air handler, this is rarely done in real world conditions leading to cold/hot rooms. Upsize runs for rooms with high heat/cooling loads, such as large windows/cathedral ceilings and several exterior walls. Upsize RETURN ductwork that is a long way from the air handler. Otherwise most of the return air will go through one grille. IMHO most homes that have 3 tons or more of A/C need at least 2 return grills.

I'm starting to see more homes with a supply and return register in every room. On one hand, you get much better air flow throughout the home (that is assuming the ducts are run properly). On the other, this is often in an unconditioned attic, so there are several thousand square feet of duct surface.
Which would you rather see? More returns or less ducts?

@Allison, boots with fitting on the end avoid having to turn the flex, but they are among the worst performers. Boots with a 90 bend off the back are better, but the turn radius is typically too short. I much prefer your solution.

@Bob & Jon, in homes with an open floor plan and blower inside conditioned space, the best return system is ductless. The upflow unit is mounted on a return box with one or more filter slots, which communicates with the rest of the house through a louvered door or large transfer grille in the mechanical closet wall. Filter surface area should be at least 50% larger than blower return opening. Jump ducts and/or transfer grilles should be used provide low static return paths from isolated rooms. Door undercuts are usually adequate for laundries and baths.

Each home will have it's own unique requirements, but the less return ducts, the better. Just make sure there's an adequate return return paths to all rooms. See http://bit.ly/oQtlYh for design guidance.

Ref not hanging the ducts high in the attic, one of my clients thinks I'm a genius because it took me 20 minutes to significantly improve the air flow to their living room, even after an "expert" had checked out the original installation.

How'd I get to be so smart? The 25 foot flex duct went from an ankle level trunk, up to a rafter and down to a ceiling boot, almost doing a 180 at the rafter-it was probably 2/3 blocked off. All I did was cut the hanger strap and arrange the duct in smooth curves. Tada...! Instant genius. And I'm a handyman, not an HVAC installer.

BTW, go to http://www.youtube.com/watch?v=teufz17PqoY to see what happens to bad HVAC installers.

This metal elbow could present a condensation problem if loose-fill insulation is simply pushed up around it. See M1601.4.5 in the IRC.