Rod had a major duct failure going on in his crawl space. It was summertime when I visited and took the photos you see in this article, and the ducts had four serious problems that robbed his air conditioner of cooling power and created moisture and mold problems in his crawl space.

There's a good reason why insulation that's sold for use on ducts is wrapped with foil or plastic, both impermeable to water vapor. You can see in the photo at left and the one below that the paper-faced insulation they used on part of the supply ducts was wet and moldy.

The kraft paper facing used on fiberglass batts is a Class III vapor retarder. It's meant to slow the movement of water vapor that it might encounter in an above-grade wall, but even then it doesn't get nearly as cold as the kraft paper facing on the ducts you see here because it's installed on the warm-in-winter side. 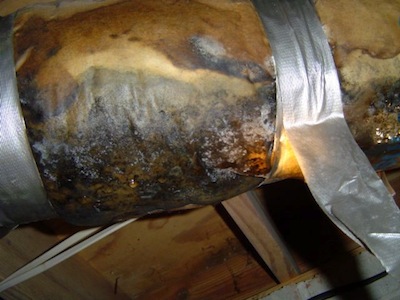 When you put this type of insulation on very ducts that get cold supply when the air conditioner is running, its vapor retarding ability is overcome by water vapor's love for cold temperatures. Also, paper is a sorptive material. The water vapor doesn't just flow through it. It interacts with the paper, which can suck up large quantities of water. Paper is also known as mold candy because the fibers are shorter and more processed than in wood.

Fiberglass batts intended for use in above-grade walls should NOT be used on ducts.

The second problem in Rod's house was that the insulation on the ducts was inadequate in places where they used actual duct insulation. In this case it was foil-faced, but it was old and compressed. As you can see in the photo below, the temperature on the outside of the foil-faced duct insulation was below the dew point. 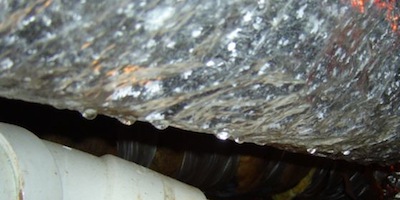 Did I mention that this duct system was in a crawl space...in the Southeast...where dew points regularly go above 70° F? If the air running through those ducts is 55° F, it's not hard for poorly insulated ducts to sweat like this.

Another section of cold supply 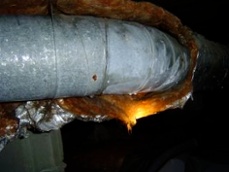 The fourth problem was that a significant amount of their cold air was leaking out. It was an old hard-pipe system, and those are often the leakiest ducts I test. As you can see in the last photo above, there's no kind of sealing at all on all those joints at the exposed elbow. I didn't test this house because the homeowners didn't want to pay for a full home performance assessment.

Did they fix it?

Unfortunately, I couldn't convince the homeowners to address the duct problems. I suggested crawl space encapsulation, and they thought it was too expensive. I suggested just fixing the duct problems by pulling all the insulation off, sealing the ducts, and reinsulating them; they had a friend who could do that for them. The reason they called me out that summer day in 2005 was because they had a plumbing leak. I'm still not sure why they called me for that because they found me through a Yellow Pages ad, which was probably in the insulation section.

I hope they've done something about it since then and aren't still suffering with higher air conditioning bills, too much humidity, and poor indoor air quality because of these duct failures. This would have been a great way to help keep their home cooler during the heat wave this summer when temperatures climbed well above our design temperatures.

9 Uncommon Tips for Keeping Cool with a Struggling Air Conditioner

With leaking supply ducts, there is one thing that screams in my mind which is often not mentioned:

If you had 200 CFM supply leaks, well that is a moderate loss of cool. But if you had a fan blowing in 200 CFM outside air all in one place, you would be VERY motivated to stop that.

Simply not a problem we deal with in the North (much). Which reminds me of a blog topic I'd broached...

I call these types "Management By Crisis" people; they do nothing at all until there's a major problem, like in this case, water running onto the floor. Then they call the wrong guy to fix it! I've had some similar experiences, people having major issues, but they don't want to do anything about them. I want to ask them why they called me. I believe some just wanted to take advantage of a utility rebate, and get "a deal". Then there was the guy who wanted to get a new furnace, not because there was anything wrong with his, but he wanted the state rebate. He didn't want to pay for an assessment of his house though.

I usually get the call after service masters has taken thousands of dollars and the problem still exists.

the only way I've been able to stop condnesation is to

unwrap the ducts, mastic seal the ducts, all ells, and long seams of hard pipe ducting, connections of ducts to plenum, and connections to supply boxes.

then mastic seal plenums to equipment, and supply boxes where the penetrate into building envelope.

a huge issue, that hvac companies do not address.

we test both house and ducts(r/a) for leakage prior to work, and again once work is complete.

it isn't cheap, but then neither is allowing 30% of the conditioned air to never make it into the house. you either pay to have ducts sealed, or pay every month by higher utility bills.

I'm surprised you haven't included many examples of flex duct failing due to moisture. In my time testing and diagnosing homes in NC, I came across numerous homes where condensation from the exposed supply boot had dribbled down inside the jacket and/or inner liner, effectively turning the flex below into an 8" P-trap.

I recently installed a heatpump in a crawlspace in a 23 yr. old house which formerly had no central HVAC. Come summer condensation set in with a vengeance. Everything was soaking wet.The dirt was well-covered with poly. I sealed up the foundation vents with pieces of insulation board & presto - everything dried right up. I've always maintained that foundation vents are a relic from the past & let in hot/humid air in summer & cold air in winter.