How Do We Get More Diversity in Green Building and Home Performance?

I'm a white male. I know, I know. You saw my name and thought I was woman. It's not the first time that's happened. My 10th grade biology teacher refused to believe that I was Allison Bailes on the first day of class when she called roll. It wasn't until a friend of mine confirmed it for her that she accepted the reality that Allison is a name that could actually be given to a male.

Despite my inclusion in Who's Who of American Women, The Millenium Edition, the fact remains I'm male and I'm white. So are the majority of the folks who work in this industry. I don't apologize for being a white male or working in this field. I had no say in the former, and I'm doing what I love, which is what I think everyone would do.

I'd love to see more women and more diversity in general, though. We all think differently, and the kind of genetic, cultural, and ethnic backgrounds we come from has a big influence on how we approach problems. It's the melting pot of ideas that can help us solve a lot of the problems we face in the world, and I believe that energy is one of the biggest.

I got to thinking about this recently as I was looking through the Energy Vanguard Blog and seeing nothing but white males in the photos. I haven't done a 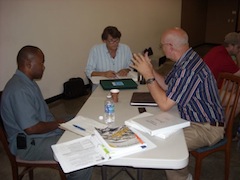 good enough job of including women and minorities here, and I want that to change. When I show photos of our HERS rater classes, there's not much diversity because our classes haven't been diverse. In the spirit of being open with our numbers again, I'll tell you that in the 8 classes we've taught, only 7% of our students have been women and only 7% have been minorities.

The field of green building and home performance has a lot of great folks involved, including some very influential women. A few whom I know are:

At Affordable Comfort's national conference earlier this year, a new initiative called Women in Home Performance got its start. I heartily support efforts like this. We all benefit from diversity, so let's do what we can to get more of it. For my part, I'll work harder to make the Energy Vanguard Blog more inclusive, something I haven't really paid enough attention to up till now.

What are your thoughts?

I'd like to point out the Passive House movement in both the USA and New Zealand is being led by women (in my opinion anyway).

Allison, be sure to add Vera Wang to your list of blogs and contacts ... she may have some thoughts and ideas for you as well.

Justin Q.: I didn't know about New Zealand, but I do know about Katrin Klingenberg, the driving force behind Passive House Institute of the US (PHIUS).

Joe W.: Thanks for clearing that up. I was racking my brain trying to figure out your angle on Vera Wang. (Green built wedding dresses?) I just checked out Vera Novak's blog, and I hadn't heard of her before, so thanks.

As a white male with a name more often associated with women, I can relate. As for diversity, however, I am proud to say that we in Santa Fe (and in particular our local HBA) are home to some of the smartest women in Building Science. You mentioned Amanda Evans, who has come on to the scene like a force of nature, but I must point out that my co-worker here at SFAHBA, Dalinda (Dee) Bangert, was one of the first builders to recognize where the market was going and became a HERS rater in 2007. Dee also worked with me on a task force to create Santa Fe's Green Building Codes and later developed a 4 hour Thermal Bypass and Advanced Framing course for Amanda's Energy $mart Academy. She is a first-rate building scientist. The latest woman to join the ranks of Santa Fe HERS raters is another SFAHBA member Teri Buhl. As a former engineer, Teri brings another level of expertise to the profession. Both Teri and Amanda are SFAHBA Board members and very active in our Green Building Council.

Amanda recently brought out the 2 day Lstiburek/Straube dog and pony show to Santa Fe. I believe they were impressed with our people since all three were invited to Uncle Joe's annual summer camp. And not just because they happen to be women who enjoy an occasional beer with the guys. I think he knows what they contribute to the movement.

I don't know about you Allison, but I have become much more comfortable with women telling me what I need to do.

Thanks for the insightful post. Female leadership is a critical componenet to a balanced industry strategy. In addition to launching women in HP (WiHP) through a series of regoinal meetings and free webinar presentations on the power and potential of female leadership, ACI is hosting a web based board development training series. How do we prepare women to pursue leaderhsip positions in our industry? This series starts in January!

it would be great to have more women in my energy rater field.

as it would be in the trades we deal with on a daily basis in our work.

here in Louisiana you don't see a lot of women builders, insulators or hvac. some but not enough.

but at least it is a start. seeing other women at the meetings I attend..is a rare thing.

every woman I meet in a male dominated field has a true passion for the work she does. otherwise...why would we put up with some of the things that happen on a weekly basis?

the good thing is that as we become more established in our field..we have less of the good ol boy mentality to deal with.

Thanks for the shout-out Allison. I am honored to be written about in the same article with Linda and Tamasin, two of my home performance women heroes.
I hope you'll come out to see us here in NM some time soon.

Kim S.: Yes, Santa Fe's got it going on. I know Dee but haven't met Teri yet. Glad to hear that they got invited to Summer Camp!

Amy F.: Thanks for the update on the new training series. I'll do what I can to get the word out.

Debbie: Good points. I like the idea of doing things differently. Louisiana is different in many ways (I grew up there), but you're not unique in having few women in HVAC and home performance jobs. Let's change that.

Amanda E.: You're welcome! You may not have the long list of accomplishments and awards they have (yet), but you usually don't get invited to give keynote speeches without doing remarkable work. It would be wonderful to get out there and see what all you've done there at SFCC.

Green Building and Home Performance is a bit like crossing a scientist with a private investigator and a dose of builder and remodeler too. I am sure that the percentage of women and minorities might be just about the same in those professions. And those professions also grapple with the challenge of how to increase diversity just as you do. So, I am not surprised by your question. Women and minority leaders can encourage their constituents to pursue this as a worthwhile profession, but all who are currently in the trades need to step forward and do their equal share to encourage the participation of anyone who shows an interest.

Let's include Ann Edminster in our list of remarkable women leaders in green.

Anne Edminster has been active in green building for 20+ years! Anne has an impressive & inspiring list of accomplishments!


“Ann Edminster is a true pioneer in the green homes field: based on her
own hands-on experience, she spots trends and opportunities years
ahead of others and is there waiting when the ‘leaders’ arrive.”
– Rob Watson, CEO, EcoTech International

“Ann has a passion for understanding buildings and the ways that they – and we – can lighten the load placed on our Earth. She wants to help improve the way we design, build and run our homes. Ann’s personal and professional commitment shines through in all of her work.”

Debra, thanks for that boost!

Allison, I find that the best males to work with are the ones that recognize that being told what to do by women is a good thing. ;) Hope to see you at Greenbuild!

And I forgot to mention our YouTube channel, SeeWomenLead -- check it out, add more videos! http://www.youtube.com/user/SeeWomenLead/

ACI is proud to host a webinar with Ann Edminster on November 7th. join us to learn more about the power of female leadership. Thanks to Ann and all the inspiring women leaders making a difference for us ALL! www.affordablecomfort.org/women

You've said it all! Diversity is the key to many things moving forward. (Diverse Ideas & Thinking) I would rather go eat at a potluck with many diverse people bringing their food and culture to the table then a place where all is the same. Tired of PB & J, lol. Guess this is why I struggle at 250lbs! I was going to post something about the tenth grade incident, lol. But I'll leave it alone bro, Don't want to see an article about professionalism.

Thanks so much for this blog Allison. I’m a black male and a regular reader (and occasional commenter) on your blog. As the technical manager of a state weatherization program, I see this lack of diversity every day. While I see a fair amount of racial diversity in some of the trades, there is a serious lack of women and minority energy auditors, raters, and other technical professionals. More diversity in this field is critical because of the disproportionately high unemployment in black and other minority communities. “Green jobs” appear to be a growth field (though slower than we’d like), and women and minorities need to be part of this growth. Minorities also face a heavier energy burden, spending a higher percentage of their income on energy and other utilities, so need professionals in our communities.

The first step in addressing this issue is to acknowledge that there is a need for more diversity. Thanks again for starting the conversation here.

Hello to all and thank you for the post. First off let me start off by saying I am Hispanic and the owner of a construction company that also has a division in Home Performance. In my area Home Performance companies are dominated by white contractors and surprisingly quite a few are white females. Our biggest struggle thus far has been trying to network with government and nonprofit agencies. We have to do a better job connecting ourselves with them if we’re going to continue being successful. So far we haven’t been able to get any work from those agencies, just in the private sector. Good day to all…