The Haunted House-as-a-System Down the Street

The most terrified I've ever been was was the time I got called to do a home energy audit of the haunted house-as-a-system down the street. I still shudder when I think of that night. Yes, it was nighttime. The caller who hired me, a woman with a sultry voice, said that was the only time I could get into the home. The money was good, and I had no idea what perils awaited me there, so I agreed. Once I got into that house, though, I thought that was going to be my last night in this mortal life. I'm lucky to be here now, telling you this story.

As you can see in the photo above, it looked like a small house. Looks can be deceiving, however. So were many other things about this house. Here's the story of what happened that night. I've never told anyone about this before now for fear that I wouldn't be believed.

I arrived there about an hour after dark on that late October day, early in the new millenium. I had my headlamp on and my handy-dandy toolbox of building science goodies: thermohygrometer, moisture meter, infrared thermometer, CO monitor, measuring tape, and juggling balls.

I knocked on the front door, and the whole house seemed to shake. A few seconds later, I heard what sounded like footsteps. Thirty seconds later...a minute later...2 minutes later, they were still going. It sounded like someone walking, but they never arrived at the front door. Was it just the echo of my knocking on this hollow, fragile structure?

I tested the doorknob. It turned slowly—and then came off in my hand. At that moment, the door began opening, slowly.

There I was, standing on the stoop of this home, gazing into endless, expansive darkness. I turned on my headlamp and stepped inside. It was still dark and full of shadows inside. I saw something move over in the corner and quickly turned to look. If I were edgy before, what I saw next sent me over the edge. 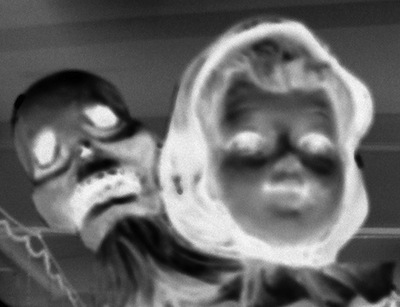 As I stood there, frozen with fear, a skeleton carrying a babydoll shuffled my way.

A loud noise interrupted the shuffling skeleton. I looked down and saw that my toolbox had fallen from my hand. The skeleton got closer. Suddenly, the babydoll spoke.

"I'm glad you were able to come out to look at my home tonight, Dr. Bailes," she said in a voice that was part Mae West, part Jane Fonda. That, of course, sent my mind racing. I was lost in thought, imagining being tied up as dozens of babydolls walked stiff-legged across the floor and started biting me.

She spoke again and snapped me out of those horrible thoughts.

"To be honest, though, I wasn't expecting a man to show up when I called you."

In a panic, I tried to get my brain to work and figure out what to do. Should I stay and pretend this was just like any other job I had? Or should I run screaming from the shack.

The skeleton reached out and I jumped backwards, slamming my head against the plaster wall. I summoned up all my willpower to stay on my feet, terrified that if I fell, the skeleton and babydoll would swoop down and feast on my live flesh.

The skeleton held out its bony arm, handing me an envelope. (Or was it an enclosure? I can't be sure because of the darkness and now, my throbbing head.)

"Here's your money, Dr. Bailes," the babydoll said. "My name's Lacy, by the way, although most folks just call me Sparkles. And this is Mr. Bones."

"Thank you," I replied, still not sure what I should do.

"Follow me, please, Dr. Bailes," she said, and the skeleton turned and walked toward the back of the house.

So I followed. The next thing I knew, they were taking me through a secret passage. 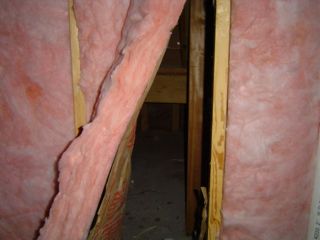 "That's...that's an incomplete building enclosure," I muttered. It didn't matter, though. They weren't listening and didn't seem to care that the fiberglass batt insulation here had no air barrier on either side.

We continued on through the dilapidated shack, behind the insulation that didn't work. They brought me to a hole in the floor and Sparkles gestured toward it, looking at me, and said, "You first."

I slid through the hole, and the skeleton rattled through afterward, landing in a bony heap on the floor before reassembling himself and then lowering Sparkles down once he was upright again. As soon as I had a look around, I knew there was something terribly wrong. 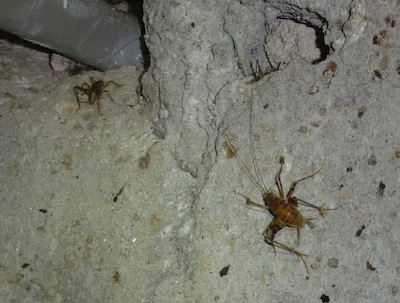 I saw critters everywhere: camel crickets, snakes, spiders, dead possums... You name it. If it was creepy, it was there.

Then I looked up. 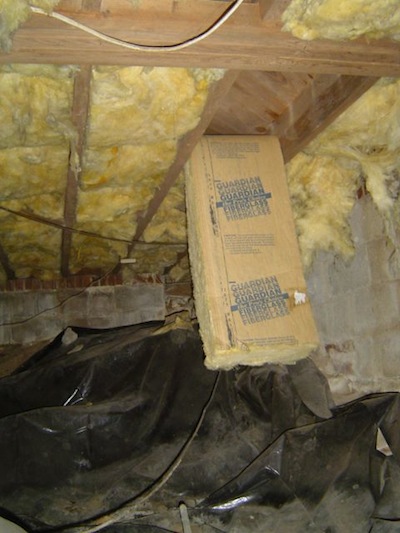 Visions of heat loss and legal battles consumed my mind. I broke out in a cold sweat. I started spouting gibberish. I began whirling like a dervish, which only served to tangle me up in the loose plastic vapor barrier. I fell to the ground, where camel crickets got tangled in my hair. One even crawled into my ear.

"Dr. Bailes?  Dr. Bailes? Are you OK?" Sparkles tried to help, and she did. Something about her voice caused me to snap to attention.

"Let's just walk down here, Hun," she said. "I think you'll feel better over this way. One of my favorite guardians lives in a room just ahead."

So we walked along, Sparkles and Mr. Bones leading, me a few steps behind. 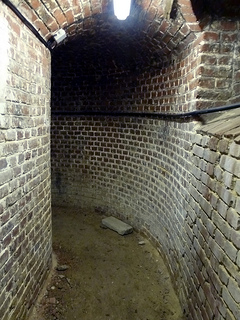 We continued on down a narrow, brick-walled corridor with a dirt floor. It felt better here. Cleaner. Brighter. Safer.

Then we went around that bend and all the blood drained from my face. I went white as a ghost at the sight before me. 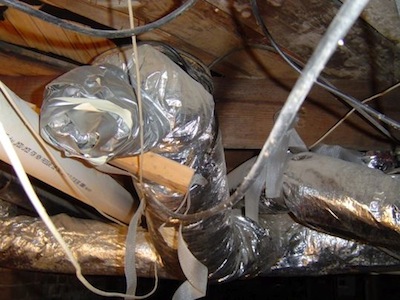 I knew when I saw that stump of a duct amputee exactly where they were leading me. I'd seen all this in a nightmare many times before. But that's all I thought it was...a nightmare. I didn't think it was real. I couldn't believe that something so horrific could really exist, not in a home built by professionals.

Maybe I'm wrong, though, I thought to myself. Maybe this duct stump doesn't lead to that horror that shows up at the end of my recurring nightmare, the one that forces me to scream in my sleep to wake myself up.

I looked away from the duct stump, and we continued walking.

"What I really want you to see, Dr. Bailes," Sparkles said, "is just up ahead. I've shown it to several other people, too."

What does that mean?, I wondered to myself. 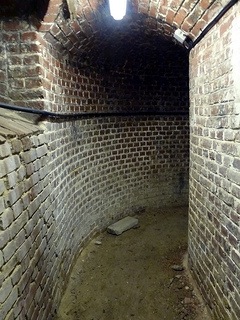 We walked on through the corridor. It seemed to be taking a long time, and none us said anything for a while. I thought I heard Sparkles breathing heavier and almost chuckling under her breath at one point, but I shrugged it off. Nah, she wouldn't have paid me so much money if this was some kind of trap. Right?

Then we went around the final bend, and there it was — the mighty Ductopus, flailing madly in that dimly-lit dungeon.

Above the din of the flailing flex and escaping air, I heard Sparkles scream, "Release the Kraken!" 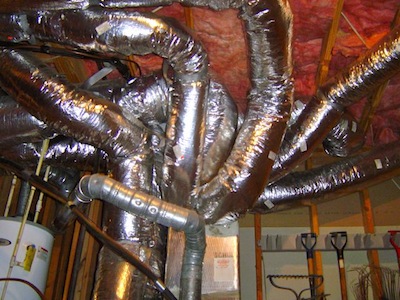 All I remember after that was screaming like Roger Waters in that old Pink Floyd song, Careful With That Axe, Eugene. I was totally out of my mind with fear and hysteria at that point. Off to either side of the horrible Ductopus, I saw groups of people who looked like HVAC contractors and home energy pros chained to the walls.

The last thing I recall was Mr. Bones setting Sparkles on the ground after I collapsed in a heap. She then covered the short distance to me with her stiff-legged dolly walk and began gnawing on my leg.

I have no idea how I got out of there or whether those other folks are down there even now, still chained to the walls next to the mighty Ductopus. I do know that it took weeks for my leg to heal, and I still have a scar.

8 Energy, HVAC, & Building Science Horrors to Scare You on Halloween

Allison, have you been watching Chucky again?

careful with that axe eugene!! LOL.

Love it! And what an excellent big finish "Release the Kraken!" was!

For a moment there, I thought that corridor was going to take us into Dr. Joe's wine cellar/crawlspace, filled with building science geeks, which also would've made for a pretty scary alternative ending.

So, thanks very much for this highly entertaining post, and Happy Halloween, Allison!

(Or should I call you Eu-JEAN?)

I loved the ductopus! That would make a great Pink song! One question though, Was this job in Louisiana? Happy Holloween! That was Spooktacular.

Thought you were going to become a victim as in Poe's The Cask of Amontillado... Not many people know of that line from Pink Floyd I find myself several times a year repeating when in similar threatening situations. This is beyond what I have coined as an "auditors nightmare" Great stuff...I have shared your site with many in our network. LEAP