When I'm explaining home energy ratings and the HERS Index to people, I often get asked, "How accurate is a HERS rating? Will my energy bills really be close to what it says?" In the mind of the questioner, that's one question. To someone who understands what HERS ratings really measure, it's two separate questions. Let me explain.

For example, when a HERS rater enters the data for a home, there's no place to enter how many televisions the home has. On page 3-26 in the HERS Standards, you'll find that the calculation for energy used by televisions comes from a formula based on the number of bedrooms:

In the formula Nbr stands for 'number of bedrooms.' Every 3 bedroom home that gets a HERS rating will be modeled as using 413 + (69 x 3) = 620 kilowatt-hours per year for televisions. If you see a car with a 'Kill Your Television' bumpersticker in the driveway of a 3 bedroom home, there's a good chance they'll use less than 620 kWh/yr for TV. If another 3 bedroom house has a constant pulsating blue glow from every room, they probably use more than 620 kWh/yr. The HERS Index won't capture those operational differences.

Both labels are useful. The home energy rating is useful because we want to know how energy efficient one home is compared to another. That's what the HERS Index does for us. For a home to get certified in a program like ENERGY STAR or LEED for Homes, we definitely want to take people out of the equation. That's why the HERS Standards set the operational parameters the same for each home being rated.

Philip Fairey and David Goldstein wrote a paper for RESNET in 2009 that describes the differences between asset and operational labels. "The HERS index, like a car’s miles per gallon rating or an air conditioner’s SEER label, is based on an engineering 'model' of its physical attributes and a standard set of operating assumptions," they wrote. In addition to the two common asset labels they mentioned for comparison (MPG & SEER), most of the efficiency labels we're familiar with are asset labels: Energy Factor (EF) for water heaters, Annual Fuel Utilization Efficiency (AFUE) for furnaces, Heating Season Performance Factor (HSPF) for heat pumps in heating mode, and others. No matter what the label says, 'your mileage may vary' because asset labels don't account for operational differences. 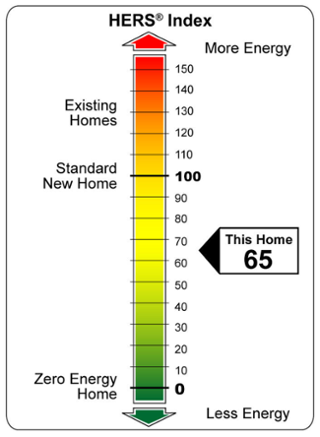 Regarding operational labels, they wrote, "It is widely known in the building science community that a large fraction of actual home energy use is driven by the lifestyle and operating characteristics of the inhabitants themselves. As a result, the [EPA's Home Energy] Yardstick actually says more about the energy habits of the inhabitants than it does about the physical attributes of the home."

In the end we need both. We want an asset label that allows us to answer the first question I mentioned at the top of this article with, "A home energy rating is very accurate." And to answer the second question, we'd say, "Your energy bills may vary widely from the estimate of annual energy use that the HERS rating gives you because it doesn't factor in the behavior of the occupants. It rates the asset (your home) but not how you operate it."

A home energy rating is a powerful tool, one that I've written quite a bit about here in the Energy Vanguard Blog (see list below). We also teach a class for home energy raters, and our next one is coming up at the end of this month. If you'd really like to learn more about home energy ratings, consider coming down to Orlando at the end of February for the RESNET conference, which is alway a great opportunity for learning and networking.

One exciting development I've had the pleasure of working on is the Energy Performance Score (EPS). Like a HERS score it is an asset label but the EPS is a number than represents annual energy consumption vs energy efficiency. The best way to illustrate the importance of this metric is that a 1,000 sq ft home and a 5,000 sq ft home could have the same HERS score but drastically different EPS'. If we stick to the MPG analogy the 5,000 sq ft "efficient home" is just a hybrid SUV. I think it's important to rate buildings based on annual consumption vs energy efficiency if we are all chasing the same end goal: NET ZERO.

Ryan S.: Great point! I agree that having a metric based on actual consumption is important, too. I wrote about the difference between energy conservation and energy efficiency a while back. It's about time for me to dig into the EPS now. Thanks for the comment!

Sorry Ryan but having used & been through the training for it - EPS is an "operational" type program just like other programs based on the "simple" algorithm or whatever they wish to call it.
If memory serves me correctly - that it is not an asset based program is listed specifically in the training under the differences between HERS & EPS

On another note, what are the 2 kinds of people?

Well put, bottom line most people want to know what affects the wallet/pocketbook in the end. The good news this is actually easier to understand than the old homeland security threat level, lol.

The terms 'asset label' and 'operational label' are new to me as is the 'Energy Performance Score' idea. I like the attempt to make a statement about the "energy mileage" of a building.

It seems to me we have another way to navigate to similar knowledge but we seem to shy away from it. The Utilities have a HUGE amount of data. If they did BENCHMARKING they could determine which houses were using less energy for a given size of home. The survey would establish a 'norm' for a given house size which would be an asset label as I interpret it. It would also spot accounts that used less than expected energy. That would create an operational label bit of information. The next step would be to inquire of the better performers (on a voluntary basis) what projects or practices led to their low usage. The lessons learned from such a study would provide insights for the rest of the population to consider if they wanted to use less energy to get the job done, whether it is a NET ZERO objective or just a DO BETTER objective.

The means described in the article seem to be based on a mathematical modeling approach. The benchmarking et al is perhaps best viewed as a statistical approach with a little detective work thrown in. Both have legitimacy it seems to me.

Sean: I haven't used it yet, but I think the EPS actually does both. On the home page of the Energy Performance Score website, they write, "The EPS allows for comparisons of one home's energy use to another, without the influence of varying occupant behavior." That's the definition of an asset label.

Nate A.: The two kinds of people are those who divide everything into two groups and those who don't. :~)

Ken B.: Now there's an idea - Let's do color codes for energy efficiency!

wd: There's a lot of work going on with the type of benchmarking and use of utility data you mentioned. REM/Rate allows for comparison of HERS results with utility data, and the advent of smart meters is allowing much more.