Posted by Allison Bailes on February 8, 2013

Last night, I was reading Surrealizations: The Gospel According To Chicken* before I went to sleep. That's always dangerous and liberating, but one question he raised got me to thinking about all of the imaginary home performance questions I'm bombarded with, so today I'll tackle a few. But first I'll start with Chicken's question about his ceiling fan.

Q. I think my fan is not really working. I think it's found a way to hum and look blurry without actually moving any air. Any suggestions?  ~ Chicken

A. Ah, you've discovered the first secret to unlocking all the mysteries of home performance: Your house is a sentient being. In building science classes, we always soften this for neophytes by saying that a house is a system, but as you've discovered, it's really much smarter than that.

The reason your fan is doing this is that you must have one of those homes that's fanatical about energy efficiency and can't stand seeing its people not turn fans off when they're not in the room. In response, it's developed a special mode to give the fan the appearance of running while using only 7.3% as much energy as it does in its air-moving mode. Most people don't notice, but clearly you're one smart cookie.

Also, it sounds like you may have become codependent with your home, and the only way to solve the problem is to take the power back. Yes, you're going to have to be Dave to your home's HAL9000 and abort the program causing the problems. The secret is to find your home's CTRL-ALT-DEL keys, which, oddly, almost no one knows about. Once you find them, you'll have the power to make your home do whatever you want.

Q. When I dry clothes in my dryer, it sends a lot of heat outside. Can I take the vent off the back and use it to heat my house in winter?  ~ Yonloppo Cygnalicus

A. Yes, and in fact, this is a really good idea for more reasons than you think. With airtight homes and modern fabrics, the average size ball of lint in a person's belly button is only 63% as large as it was in a typical 1960s ranch home and only 11/23rds as large as the belly button lint that grew in people who lived in split-level homes in 1974. (Naturally, these numbers apply only to people with innies. If you have an outie, you'll have to find the outiness correction factor.)

By diverting the dryer exhaust into your home, you'll find your belly button lint growing to impressive sizes, and if you really focus on nurturing it, you may even be able to challenge the record in the Guinness Book of World Records, which I believe is just shy of 7 kilograms.

Q. I had a new roof put on my house recently and the roofing company convinced me that I could save money by not putting shingles on. They put the black tar paper up there and then sprinkled it with glue and coarse sand. Will this work?  ~ El Cheapo in Chicago

A. I frequently solve a similar problem the same way. Occasionally, I realize as I'm driving to work that I forgot to put my clothes on. So I draw a pattern on my T-shirt and underwear and everyone thinks I'm wearing chain mail. I keep a black marker in my car just for this purpose. It's a great way to be able to get work done, too. No one ever messes with a person wearing chain mail.

A. First, I assume you're really asking about the e-book and not the e-reader. If it's e-readers you want to burn, you won't get nearly as much heat as burning the actual e-book. They're mainly glass and plastic, so if you burn them you'll get approximately 138,772 BTU per gallon reduced by a factor corresponding to the ratio of the flammable plastic material to the nonflammable glass and metal. 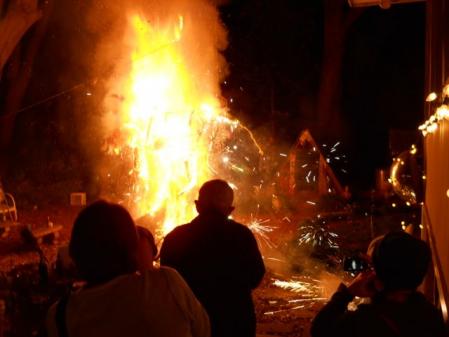 To burn the actual e-book, you'll need to extract the electrons of said book from your e-reader. There's an app for that, of course, but it's not very efficient so your overall BTUs will be greatly reduced. What I suggest is to connect a Turbo-Thermo-Encabulator Max to your e-reader through the audio jack. This device overcomes the Coulomb repulsion of electrons, allowing you to accumulate them at much higher densities for burning. In fact, we used one at the Apossumocalypse party to celebrate the new year and the beginning of the post-non-apocalyptic world.

That brings up an important point: It's best to burn e-books outside. If you burn them inside, I recommend installing a ventilation system capable of ventilating at 3750 times the ASHRAE 62.2 level, but certainly no less than 200 air changes per second. When you go to Home Depot or Lowe's to buy this type of system, make sure you talk to one of guys at the pro desk and tell them you're looking for a 'home hyper-ventilating unit.' They keep them out back in a special shed because not many people know about them. While you're there, you can ask them for the cable to connect your Turbo-Thermo-Encabulator Max to the audio jack of your e-reader, but you may have to go to Best Buy for that.

*Remember those instructional novelettes (e.g., "How to Bury Yourself in the Ground Up to Your Neck") I mentioned at the end of my article on the Turbo-Thermo-Encabulator Max? They're from this book by Chicken.

Photo of Salvador Dali with chicken by Ben Sutherland from flickr.com, used under a Creative Commons license.

If you want to see a REAL "chicken" application in your area of interest, see this website - http://www.ag-tite.com

Great post. But that photo is beyond creepy. Seriously going to have nightmares.

I think your numbers are deceiving.

While your belly button lint percentage may be correct, how are you factoring the tremendous growth in belly button size?

Twenty-five Yard Penalty from point of the infraction!