The Tail-Wagging Labradors of RESNET

First, let's get right to James Brown. Evidently, there's a video of him doing a blower door test back in the mid-1980s. I heard about it from Gary Nelson and Dennis Creech the other night. The 'hardest working man in show business' was the 'Godfather of blower doors' for a brief period as part of some community service he was required to do. It seems that legal restrictions have kept it under wraps all these years, but apparently one person out west has been showing it publicly. I hope we get to see it soon.

Gary Nelson. I already wrote about the news that Gary Nelson gave me about The Energy Conservatory's new wifi device. (Retrotec has one available already, which I found out from Colin Genge this week. I haven't found it on their website yet, though.) I also had a nice chat with him about how he got into the world of building science and blower doors. Like me, he's got a physics background, but he's been in this field since the '70s. He's one of the heroes of our industry, and I'll write more about him and his work in a future article.

RESNET, ACCA, and IAQA. One thing that was new this year was that the RESNET conference was combined with the conferences of the Air Conditioning Contractors of America (ACCA) and the Indoor Air Quality Association (IAQA). It was great! The early numbers I heard indicated that RESNET had about 1000 attendees, and the other two totaled about 800. The trade show seemed to be about twice as big, and the combination worked very well. Let's do it again! 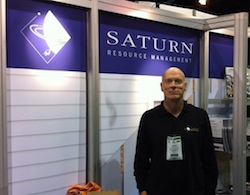 John Krigger. Earlier this year I wrote about the debate between John Krigger and Paul Raymer over mechanical ventilation for homes (ASHRAE 62.2). I got a chance to talk with John at the conference (Where were you, Paul?), and he's got some interesting ideas to help the home performance industry. In short, he thinks we need to use actuarial data as a guide to setting priorities, especially when it comes to the health and safety issues.

BPI getting kicked to the curb. I just found out yesterday that ACCA and 12 other organizations have written a letter to the American National Standards Institute (ANSI) requesting that they revoke BPI's status as a Standards Development Organization. Whoa! This is big news. Could it be that HVAC contractors, who have ignored building science and home performance for a long time, are envious that another organization has the chutzpah to do what they haven't? There's a lot to this, so I'll do some investigating and write more later.

A cooling dehumidifier. At the trade show I found that there's finally a dehumidifier that dumps the heat outside the house instead of inside. Designed for hot-humid climates, the Ultra-Aire SD12 made by Therma-Stor is basically a split system air conditioner with a lot of latent capacity. 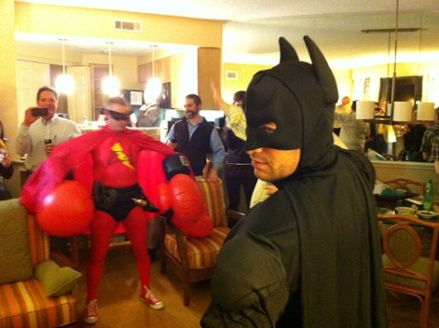 Energy Avenger vs. Batman. Yes, this really happened! The Energy Avenger won. (Some other character calling himself the Cannibal is making noise out in the bushes but hasn't shown his face publicly yet, preferring to post videos on RESNET's Facebook page. Maybe next year he'll join the fun, too.) 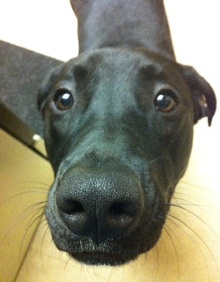 Kristof Irwin is a great friend of mine who owns Positive Energy, a rating, building science, and HVAC design business in Austin, Texas. He was one of the people I shared a condo with this week in Orlando, and yesterday morning he described the RESNET conference perfectly. He said that he could hardly take in the trade show because he spent so much time talking to friends, old and new. "We're like a bunch of labradors wagging our tails," he said. I felt the same way.

Later I mentioned that to another RESNETer, and he said, "Yeah, but we have a few pitbulls, too." Touché. Still, overall it's a wonderfull conference with a really good vibe.

I couldn't agree more! Succinctly, a friendly learning atmosphere. I did get the low down on the Retrotec DM 32 (wireless digital manometer) from Denali Jones (RTEC engineer at the booth). I'd be happy to share on your blog. Also, the humbling reception (SRO in a room designed to hold about 120) to my session on airflow has me planning to present as a free webinar soon. Stay tuned.
And, Allison, thank you for this fantastic blog. I recommend it every chance I get.

Bill S.: Thanks! I'll definitely be on the lookout for the announcement of your webinar. Now, I know the combined conference meant more people, but how did I not see you at all, Bill?!

I agree, Allison. It was a great event and it was fun hanging out with you, Jeffrey, Eric and Kristof a little bit. What are you going to cook up for next year when the conference is in your home town?

I was there through your eyes, Allison. I did miss all the tail wagging, however!

I could not agree more with Allison about the joint meeting. I had lunch everyday with different RESNET people in the IE3 exhibit hall. Great conversations and idea exchanges. Sorry I missed seeing my hometown guy, Kristof, but I did see others and there were a lot of people. I agree, lets do it again. The take on the BPI/ANSI is not correct and that will all come out. The other 12 are not all ACCA related and not all air conditioning. People are figuring out that BPI is not working with any industry including anybody in building performance that is not part of their immediate group. Remember as this plays out that ACI and Efficiency First are blood relatives to BPI; they will also probably be their very limited support. One more thought, the ONLY ANSI already approved home performance standard is QH12 done by ACCA/RESNET over a year ago which DOE wants ACCA and RESNET to share. ACCA and RESNET agreed to do so with an understanding on control. BPI said they were going to write their own. ACCA has no objection to anyone writing ANSI standards as long as they follow very clear ANSI guidelines. BPI has failed to follow these established ANSI guidelines including allowing ANY interested entity to file comments and receive a response.

Who you gonna root for ACCA Man or BPI Guy?

ACCA Man, in an obvious best defense is a good offense, cold cocks BPI Guy in an obvious attempt to knock out his HP competition, allow a trade association with 3% of the contractors, to take control, be the sole authority for Home Performance, get written into the codes, and have the Code officials enforce their tax on all contractors not just the HVAC guys.

As you know, I have made several million dollars teaching over 7000 contractors how to use ACCA approved (Meaning the Software companies pay kickbacks to ACCA) software to “calculate” (back into) any size HVAC system for any house, give the building inspector or utility guy the numbers they want to see, scam homeowners into believing they are actually calculating something, and overstate energy savings by around 300%. But for anyone claiming to be a “Building Scientist” to buy this crap they have to be either incredibly naïve, believe in magic, and/or be stoned.

Since the “HVAC Guy” does not have the 3 ring circus, or all the toys “Audit Man” has, the Blower Door, Duct Blaster, Smoke Bombs, X-ray vision glasses, or economic models that require truing up, he simply makes the numbers up by doing a song and dance.

Start with your hands on your hips:

Determine duct loss by turning your palms up and look at the ceiling for divine inspiration.

Calculate Air Changes by flinging blades of grass in the air like Tiger Woods before hitting a 5 iron.

Sling your Psychrometer and Shake your Money Maker!

Establish insulation with the X-Vision dance move using your fingers like John Travolta dancing on heroin with Uma Thurman in Pulp Fiction.


Now Grab your butt and pull out the phony HVAC performance metrics (also my work).

Finally, goose your savings at 10% a year over the like of the system, add them all up, average them back to this year, and shake your booty!

Unfortunately for Audit Man, HVAC Guy’s savings numbers are 3 times his, the customer will never notice the con until a year later, and the whole fraud is ACCA Approved!

Therma-Stor's Ultra-Aire SD12 is what the Southeast has needed for decades! Thank goodness for those at Therma-Stor for continuing toward the evolution of this all-in-one product. It should be heartily (even lovingly) embraced by HVAC, Indoor Air Quality, and Green-Building Pros. Sure the price tag is hefty but look at the troubles we're having with the healthiness of our indoor environments without it.