The next best thing would be to keep the dead possum outside your home, say in the crawl space, and pipe the emissions into the house. That's exactly what these homeowners were doing, unintentionally. Our friends at E3 Innovate in Nashville, Tennessee sent us this photo of what they found in the crawl space under the home of one of their customers.

See the possum? See the problem? The dead possum by itself is bad enough, but there's one thing in this photo that makes it even worse. The photo below shows you what it is. 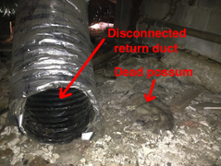 Now, if you know anything about forced air heating and cooling systems, you may be wondering what the other end of that return duct is connected to. It could be connected to a return grille, in which case the noxious emanations would travel up into the house relatively slowly. Anytime someone in the home walked by that grille, they'd get a powerful whiff.

The immediate fix here, of course, is to get rid of the dead possum and then reconnect that return duct. To solve the general problems of having a vented crawl space, encapsulating it is the ticket. E3 Innovate does a beautiful job encapsulating crawl spaces, which they did in this home. The photo below is from a different home, but you can see how nice it looks when it's all shiny and clean. 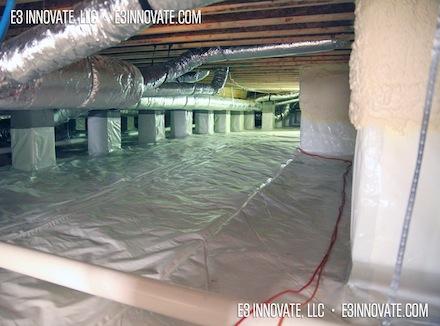 First of all, when you go to all this trouble to encapsulate a crawl space, it's a lot less likely that you're going to get possums in there. I'm not saying it'll never happen, but it's improbable. If one does get in there, it's pretty easy to find and remove.

This is why that old expression about possums is so popular. You know the one I'm talking about, right? The one about how something "stands out like a dead possum in an encapsulated crawl space." Surely you've heard it before.

J. Possum P.: Yeah, animals do crawl into ductwork and air handlers and die there. If you follow the HVAC hacks page on Facebook, you'll see photos of that kind of stuff. Snakes, frogs, possums... You name it. Even squirrels! Sometimes they get crushed by the fan. Sometimes electrocuted. Critters and HVAC don't go together well!

A disconnected duct like you show, I would hesitate to call that even Building Science. It is just terrible lack of integrity on someone's part. When I look back on the number of times I paid for something, I was told the job was completed, and later learned it was not done, I tend to think the answers to many problems lie in simple craftsmanship.

Like Pirsig's "Quality" in "Zen and the Art of Motorcycle Maintenance", you already have an intuitive understanding of what it is.

First, nice job by E3 Innovate. I'm seeing more and more of these well done jobs. Kudos to all who get this right.

As to your new old possum saying, it's true that one of the benefits of encapsulating a crawl space is that bad stuff does show up. Never underestimate the benefit of being able to see a problem.

Oh, and far be it from me to gossip, but has Mr. Poole undergone a species change? It's so hard to keep track these days...

I'm glad the auditors at E3 innovate were able to quickly narrow down the possumbilties as to what might be causing that smell. Otherwise, they would have left the homeowner hanging.