My wife and I visited family in Florida recently and our first stop was the home of my sister and brother-in-law in Lakeland (east of Tampa). They haven't lived in the house all that long, and my brother-in-law, Jack, moved his man-cave into the one upstairs room when they settled in. After one summer in the room, however, he abandoned that room for the cooler space downstairs. The problem, although not obvious to homeowners facing it, is a relatively simple one.

You can see the room in question in the photo at left. The house has a flat roof, and this room projects up through the center of it. If you have a feel for building enclosures, you may already see where this is going. If not, keep reading.

The anatomy of walls

I spotted the first potential problem when I looked out the windows in the room. I could see that the flat roof outside was above the level of my waist, which meant that the room was surrounded on all four sides with attic kneewalls more than three feet high. Knowing what I know about kneewalls, I suspected that when I looked in the attic, I'd see the typical mess there. 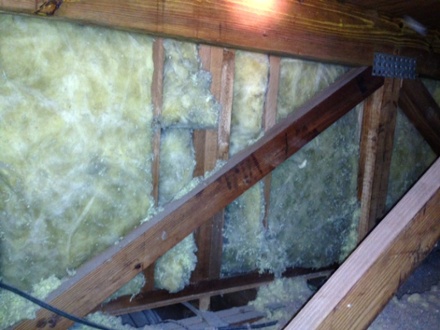 Yep. There it was. Insulation in a 2x4 attic kneewall with no sheathing over it. The insulation is dark in places, which indicates that air has been moving through it, too. I didn't have an infrared thermometer to measure the wall temperature, and it wasn't the hottest weather while we were there either, but I'm sure those kneewalls get pretty warm when the attic gets hot.

There's another problem showing in that photo, too. Can you see it? The photo below zooms in on it to help you out. 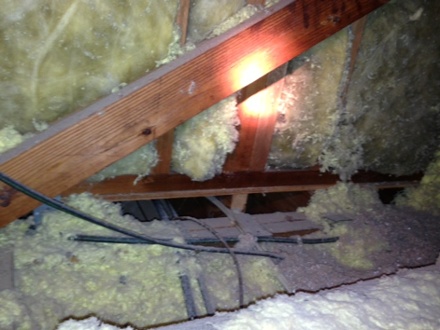 The floor joists below the man-cave floor allow hot attic air to go right up under that floor, so it, too, will get warm when the attic's hot.

Windows in the man-cave 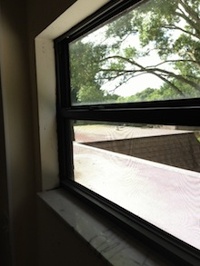 Yet another problem that increases the heat gain in this room is that the two windows, one facing south and the other facing north, are the worst windows you can install. Well, OK, I guess jalousie windows, which were popular in Florida a while back, would definitely be worse, but the single-pane metal-frame windows here are a big liability in the building enclosure.

The walls have R-11 insulation (although it doesn't currently perform at the level of R-11 because of the problems mentioned above). The windows have an R-value that's less than 1. To make matters worse, the south-facing window has no overhang and gets direct solar heat gain.

Starting from the bottom of the room, the floor has a lot of heat gain, even though it's sitting directly over conditioned space. About 40% of the wall area is attic kneewall with a lot of heat gain. The single-pane windows add more. I couldn't see the ceiling, but I'm sure it's not in good shape either.

The way to fix this room without adding more air conditioning would be to:

The first two items in that list would probably be enough to let Jack move his man-cave back upstairs. If he does all four, I have no doubt the room would be nice and comfy on even the hottest Florida days. 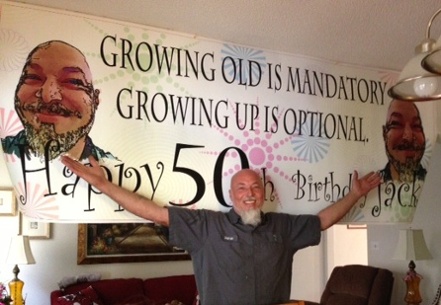 And wouldn't that be a nice present for someone who is turning 50 on the day this article is being published? We were there a couple of days before his birthday and surprised Jack with this banner (made by aunt, Robin Walker, an artist), a bunch of black balloons, a birthday cake, and a nice dinner out.

Happy Birthday, Jack! Let's get this room fixed for you.

How to Sheathe an Attic Kneewall — And How Not to

Your Connection to the Blast Furnace - Attic Kneewalls

Unfortunately you are square in the middle of the trust zone of the trust/respect relationship. People trust those they know closely, but do not respect them. They respect people they don't know, but do not trust them.

Usually what happens is that you look at it (for free - first mistake) and tell them all about these self-evident truths. I mean once you point it out, it's obvious right? I'm sure you've already been through this Allison but for those newby's out there, the response is something like, "Oh, you really think so? I'll talk to Jack about it." That's the last you hear until the next visit when they tell you that there is now mold growing in the room. You explain that it's all those same things and why haven't they fixed it? They respond, "Oh you really think it's the same things causing this?" After that either nothing continues to happen, or someone tells them about a "really good" company/person, hopefully from out of town. Maybe Tallahassee in this case. The "expert from afar" comes in and puts a 2 ton system up there to fix the problem. You find out about this after the work has been completed of course.

Or they fix it right and your family tells you about this expert that came in & did some stuff to the walls that "sounded like some of the stuff you were talking about" and their so glad because now it's great and it only cost them $8,000.

Charles: Good point. I added a qualifying statement after the sentence where I stated the walls have R-11 insulation.

Skye D.: Sadly, your analysis of the trust/respect relationship is accurate. In this case, I'll help my sister and Jack get this done right, even if I have to go down and help them do it. They just went through a little interior remodeling job that turned sour on the day it started, so they're really gun-shy about hiring any contractors now.

That is a great article, but you missed mentioning something very important, that is very obvious (You can see it in your Photos). Can you find it?

Sadly your trust/respect relationship is so very true. I have stopped offering friends information on energy efficiency/home comfort. Building science is too complex for the average homeowner. Not that it's hard but...

Allison, thanks for looking into the cooling issues we've been having. We thought it was due to poor insulation and this confirms our insulation is a problem. We completely trust you and have faith in your evaluation of our home and we totally trust your recommendations to be accurate as to how we can make our home better.

We are a bit skittish in thinking about hiring another contractor, but it certainly helps in finding and hiring the right person for the job when you know exactly what needs to be done.

Thanks again and it was so good to see you and Elaine! I guess it's our turn to come to Atlanta next.