Air conditioners use refrigerants to move heat from inside your home to the outdoors. The old refrigerants were bad for the ozone layer in the stratosphere. The first replacement, R-22, is better but was meant to be used only as a transition until a new type of refrigerant could be developed to take its place.

Since the end of 2009, the US EPA has banned manufacturers from shipping out new air conditioners with R-22. Their rules contained a loophole, however. If they 'dry-shipped' the new ACs, the ban didn't apply, a loophole I wrote about last year. One manufacturer saw the loophole and jumped through. Others followed.

In the past three years, a lot of new R-22 air conditioners have been installed, despite the EPA's intention to accelerate the transition to R-410A. Sadly, the installers focused only on the first cost of these systems, ignoring the inevitable high prices of servicing air conditioners with a banned refrigerant. 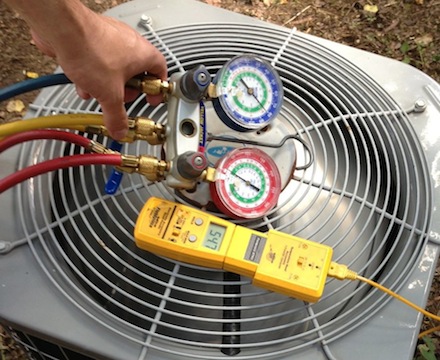 How does the first cost of that dry-ship unit look after you fill it with such expensive refrigerant? Not so good, and that's what is finally going to close the loophole that allows dry-ship units to be sold. And if you think it costs a lot now, just wait. In two years, production of R-22 is set to drop 90%.

Contractors are simply using alternate refrigerants such as NU22 and MO99 to fill the dry condensers/systems with. R22 Dry swaps aren't going away anytime soon.

I'm not looking forward to the chaos to come in the field when techs come upon systems with different R22 alternatives. Will service trucks have to carry 6-10 different refrigerants?

As a small contractor I have switched to 410a exclusively. Yes I still service r-22 units that leak but for 4 years have never installed a dry unit. Funny thing lately though I had to refill two very large units. Wiped out the rest of can r-22 and about half another in one week. I deal with two suppliers and checked pricing for both. The price for r-22 had actually come down about 40 dollars since I bought one last year. Go figure. I sell mine by exact ozs I put in the system. Cost to customer is 1.28 an oz. Others I know do just sell by the pound. I still see new dry units from less than a year ago. Don't understand the ethics but a lot of people arent that busy. I'm swamped with work sometimes too much. It took me awhile to get on the band wagon Allison but I'm not going backwards like some companies.

there are always going to be hvac companies & homeowners that see cheaper equipment as the best 'deal'. that mindset wont change for everyone.
as long as unit doesn't leak it isn't a problem...but paying $175 per lb for 5 ton unit on start up...there goes the savings. funny they never see it that way! LOL!

I replaced a compressor on an American Standard 3 ton condensor. I pulled out 11lbs and 6 oz of R-22 while the name plate read 6 lbs and 5 oz. Lines set was 15 feet. I added a filter drier and the subcooling charge was 10lbs and 8 oz. why is that??? It should be the name plate charge plus the filter drier, 2 1/2 more oz. Name plate charge I only had 45PSI??? Any thoughts or reasons for the additional 4 lbs of refrigerant??

Sounds like oversizing and/or poor airflow issue. System overcharged to prevent the evap coil from freezing. Of course overcgage leads to liquid floodback and hence the reason you are changing the compressor.

almost all units nameplate charge includes condenser, matching evaporator, and 15ft lineset. anything over 15ft lineset you add .6 oz(aprox) you should be charging by superheat anyway, only checking subcooling and it really sounds like a airflow problem. ever cleaned the evaporator coil, most techs never do and end up overcharging

I know this a older blog but I would like to chime in on the subject. How can we as AC professionals be so angry at gasoline prices and price gouging when when some of us are charging $75 lb for a product that in 2014 is not costing us anywhere near that amount.
R-22 prices are for the time being stabilized at three times the cost of 410A. and for large companies that can purchase in bulk even less then that.The government has changed the cut off date.There is plenty of r-22 around right now.
there is no legitimate reason right now to scare and sometimes rob people.
I just fixed a leak on a 30 ton rooftop unit. The repair was a fraction of the cost of a new unit.
A small central ac freon leak repair should not be used as a way to bully people.
5 lbs of freon r-22 does not cost that much right now.6-4-14
Do the repair smile and say when your to upgrade we will be there for you.
http://ambientmechanicalsystems.com/freon-leak-repairs-fishkill-ny-12524/

I agree with Greg, the total cost includes so much more than the cost of the refrigerant. Another issue is once the supply house gets their dealers paying the high prices they don't come down even when their cost drops. My skid pricing isan't close to $10 a pound.

Ok. I'm 71 years old and retired. How in the hell am I supposed to afford such price gouging pricess for freon R-22? Why the recovery charge when you are not taking anything out? What are we supposed to do other than just role over and DIE fron the high HEAT?