Graphite in Insulation — Better R-Value but Can You Write with It?

Yesterday I got to see something I learned about only two weeks ago at Building Science Summer Camp. That's where I found out that 85% of all expanded polystyrene (EPS) foam insulation in Germany is grey because it has graphite in it. I was intrigued. Until this week, though, I'd never seen any of the stuff here. Among the various foam board insulations, EPS has some important advantages, so the extra oomph from adding graphite could change the insulation market.

I've been in the North Carolina mountains for the past couple of days working with some of our HERS raters: Scott Suddreth of Building Performance Engineering in Boone and Leigha Dickens of Deltec Homes in Asheville. Leigha was kind enough to give me a tour of the Deltec plant, where she showed me the stack of nailbase panels above. They have OSB bonded to grey EPS.

This material is in their plant for a special project and is not something they use regularly. Still, it could be an indication that this improved insulation is starting to cross the pond. Who knows? Maybe it will eventually replace the white EPS used now, especially in structural insulated panels (SIPs) and insulating concrete forms (ICFs). 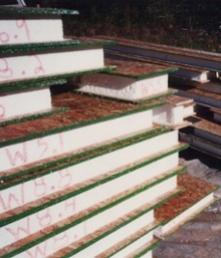 Why did they put graphite in it? Because graphite reduces the amount of radiant heat that moves through EPS. (See the video below.) The result is that it can cut the heat transfer through the material by 9 to 21%, depending on density.

BASF (the world's largest chemical company according to Wikipedia) makes this new type of EPS and calls it Neopor. Since they're based in Germany, it makes sense that Neopor would take off there first.

The video below gives an introductory look at what the graphite does, why it helps, and how to use it.

The advantages of EPS

Now, about those advantages I mentioned at the top of the article. Among the types of foam insulation, EPS has one of the lowest environmental impacts. Even Alex Wilson says so. (Yeah, I disputed the way he approached his 'study' and the conclusions he drew from it, but when you talk about blowing agents, pentane is better than HFCs.)

Also, EPS is better for not trapping moisture than extruded polystyrene (XPS). Neopor's permeance is between 2.5 and 5.5, depending on the density and thickness of the material. One inch of XPS has a permeance of about 1.1. Two inches would be about half that. Since diffusion of water vapor isn't as big a problem as bulk water for those of us in the lower 48, materials with higher permeance are generally better than those with low perm ratings.

Will it take off here?

EPS is mostly used for applications where it's the main insulation in a building assembly. XPS and polyisocyanurate dominate the insulated sheathing market for above-grade walls, where you also have insulation in the cavities of the framed assemblies, but EPS is the insulation of choice in SIPs and ICFs as well as for many roof decks.

It'll be interesting to see if EPS in North America starts turning grey. Have you seen any yet? Have you used it? What do you think?

You mentioned that XPS and polyiso dominate the insulated sheathing market. Actually, I'd be surprised if there's not more square miles of EPS sheathing installed since that's the most common substrate for EIFS.

I think there are a couple of major things to point out here. While your article seems to prop up Alex Wilson as a supporter of EPS foam, he has specifically come out in OPPOSITION to EPS foam. See his article "Polystyrene Insulation - Does it Belong in a Green Building?" which he answers with a resounding "NO" due to the toxic flame retardants that this insulation uses. I entirely agree, however, with your conclusions that his findings regarding the negative impacts of the blowing agents in his study simply lack a basis in fact. While Pentane is a well known VOC and will off-gas from EPS long after manufacture, it indeed has a very low GWP. Let's not even mention that Styrenes made the NIH's 12th Report on Carcinogens and that building materials and cigarette smoke were two of the greatest ways for people to become exposed to them.

But I think you take it too far when you make the leap from a nailbase panel to a SIP. These are two entirely different entities, one structural, one not. And there's the rub. Think about this - EPS foam melts at very low temperatures. Heck - it vaporizes. And now you are going to add thermally absorbing carbon to the chemistry? Do you know what this does to "structure"? EPIC, an industry trade group in the UK, did a TEN YEAR case study of insurance claims of fires as it relates to buildings. While approx 10-12% of the buildings in this study were comprised of polystyrene panels, these same buildings comprised MORE THAN 25% of the entire monetary damages of the 10 year study, concluding that there was a much greater chance of complete structural failure for buildings containing polystyrene panels in a fire situation. For this reason, while it is still at this time legal to build with SIPs in the UK, it is very very difficult to get insurance - and that means that banks won't lend to you.

So back to the discussion of SIPs. When you REMOVE the central core of a SIP - like when it gets hot and the foam starts to melt at less than 200 deg F (even ORNL has seen delamination in EPS roof panels from the warmth of the sun) - it stops being a structural component.

I vote that this material - if someone wants to use it - remain as a non-structural nailbase, instead of increasing the likelihood that we are actually lowering the melting point of EPS by doping it with carbon. No one is arguing that you are not going to be able to exit a building in a fire - it's the fate of the firemen that are on-scene 15-20 minutes later that you need to think about, plus of course the value of your belongings inside.

Sweet! I would think EPS is much more prevalent than XPS or ployiso, but that's not important to this topic.

? Video says 50% higher R-value? That would easily replace XPS I would think.

Are there any other pro/con to t g e product, or use of graphite? Does it inhibit pests, or reduce flame? Alergies?

Seems worth looking into option I think

David B.: You know, you're probably right. I don't think about EIFS much because I don't see it all that often.

Charles L.: Yes, there are certainly issues with EPS, but I think melting on a hot day has got to be one of the least likely problems.

John N.: I think I saw somewhere that only one ICF manufacturer has started using it so far, and I believe it was them.

How would the use of graphite in insulation of any kind jive with the fact that graphite is a superior heat transfer mahttp://www.wattsradiant.com/products/flexplate/terial ?

I'll break off a chunk and see if I can write with it.

FYI, we got those panels from a company in Johnson City, TN called General Panel Corporation. They get the Neopor from BASF and they assemble the panels in their factory to customer-specified sizes and thicknesses.

Rich, I think that it "jives" the same way aluminum foil, though a superb conductor of heat is also a most excellent radiant barrier.

I'm guessing that the process of conduction through a piece of foam has a component made up of heat radiating across the volume of each little bitty bubble. If an additive reduces that component, the overall thermal performance of the product rises.

I don't have the data, but the concept passes my sniff test on first blush.

What about current costs vs other options?

So when we shake a little graphite powder into the cellulose hopper, we're actually increasing it's r-value just a skosh? Sweet.

I assume the graphite bonds with the EPS, otherwise there would be a high risk of airborne graphite dust when cutting or working with the material. OSHA limits exposure to 15 million particles per cubic foot for a TWA 8-hour day.

Neopor sells locally for $18 for an 8x4 sheet 2" thick with an R9 value. But home depot sells for $25 a 2" sheet with an advertised R12, so it is not obvious neopor is a better insulator. Can someone clear this up?

Graphite apparently improves the R-Value of EPS foam, perhaps from 3.5 to 4.5 per inch.

Other foams, such as XPS (blue or pink board) and poly iso, perform at 6+ per inch w/o graphite.

For whatever reason, ICF is not made of anything other than EPS

Well that is some interesting physics, and low tech to boot. I saw stacks of the grey foam at this huge Passivhaus project in Heidelberg, and frankly didn't think anything of it outside of perhaps branding. https://drive.google.com/file/d/0Bwr03B5jKcJPVm91WXNiRnc5T0RCZTNkLTA2R0h...

Still not a fan of the stuff and disappointing to see so much foam in the large Germany projects.