Now, I know exactly what you're thinking. Those painters didn't want to paint insulated buildings because building science hadn't been invented yet, and they thought the insulators were jumping the gun. Or was it that painters thought that stuffing the cavities with insulation was silly when all they needed was some good insulating paint? Maybe I'm just jumping to conclusions here, as, it turns out, the proponents of insulated buildings did in their response to the painters' revolt.

I've mentioned Bill Rose's excellent book, Water in Buildings, in this space before, and it's a wonderful resource. Chapter 3 is called Water and Building Materials and lays out the US history of building science research spurred by the paint-peeling episode of those early adopters of insulation.

On the first page of that chapter, Rose outlines how a set of moisture management practices developed in the period from 1937 to 1942, and that's pretty much how we've treated buildings ever since. I'll abbreviate his six bullet points to three (since I'm not going to delve into profile analysis in this article):

It's a fascinating history, and Rose goes into the details of the different people who advanced the theory of diffusion and vapor barriers, the papers they wrote, and nearly two full pages on the 1952 condensation conference. The big names of the early building science research were F.L. Browne, Larry V. Teesdale, T.S. Rogers, and Frank Rowley. 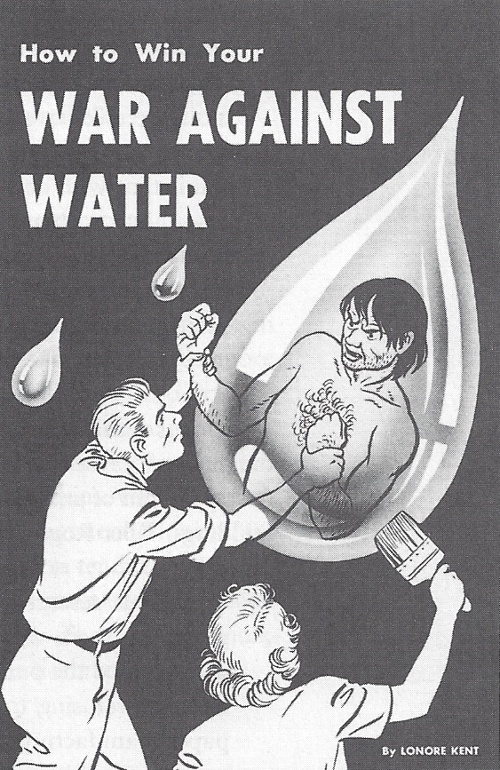 One of the most amusing parts is how the National Paint and Varnish Association got involved and declared 'War Against Water.' The image above is a cover of one of the booklets they published in the early 1950s. Written near the beginning of the Cold War, they villainize moisture much the same as McCarthy maligned communists. For example:

They seem innocent enough, these three pools of moisture: the milk from the bottle, the steam from the shower, the vapor rising from the whistling tea kettle. But are they? Oh, no...they're up to no good. Where do they go from here? Believe it or not, they have an engagement. At the "dewpoint"—if you please.

Yeah, we can laugh now, but back then building professionals and homeowners alike were practicing their duck-and-cover drills at the slightest hint of water vapor!

Will the real culprit please stand up?

Those early building scientists did good research and advanced our knowledge of buildings considerably. For example, Teesdale found that a material's wetness is related to its temperature in what Rose calls the Fundamental Rule of Material Wetness: Cold materials tend to be wet and warm materials tend to be dry.

The problem, though, was that the industry, led by Teesdale, Rogers, and Rowley, focused almost entirely on moisture diffusion and the need for vapor barriers. (These are also the guys who gave us vented crawl spaces, but that's another story.) Browne is the one who got it right, way back in 1933. Yes, he mentioned diffusion as one mechanism for the wetting of walls and peeling of paint, but he also called out "poor carpenter work or faulty design," as Rose quotes him.

That is, the bigger problem was bad flashing details, which allowed rainwater to get into the building assemblies—and then stay there. Before insulation, it didn't matter so much because of the Fundamental Rule of Material Wetness. Uninsulated walls stayed warmer and thus dryer. With insulation in the walls, the cladding was colder and that meant it had less tolerance for bad flashing.

So the moral of the story is not to jump to conclusions. We learned a lot about vapor diffusion, but our decades-long obsession with vapor barriers was counterproductive and hindered us from learning the more important lesson: It's generally more important for building assemblies to be able to dry out than it is to prevent wetting by vapor diffusion.

I'll give the last word to Bill Rose on this topic: "Given the fact that a very small percentage of building problems (1 to 5% at most in the authors experience) are associated with wetting by water vapor diffusion, the argument for enhanced drying potential becomes much stronger."

To this Day ... "Water in Buildings" continues to be my favorite Book.
And Bill Rose ...my favorite Author and Building Scientist.

I have been fascinated (make that Obsessed) with Water ever since I opened Bill's book.

Great post! Here in Ireland, problems with ventilation and mould are becoming endemic as buildings become tighter and insulation becomes greater because of the lack of science/reality understanding in regs and by builders.

Here, dominated by existing masonry buildings, the retrofit craze has been, and continues to be, internal 'dry lining' meaning internal insulation with sheets of drywall plasterboard glued to 50mm of PUR/PIR mounted on battens or glue dabs on the inside of exterior walls. Easy for the builders to install and they get to be inside out of the wet and cold, and cheaper and less aesthetically changing than exterior insulation.

Clients don't understand that the thermal and moisture concerns of internal insulation so hey on we go!

After building science critiques of internal insulation the manufacturers have responded by cherrypicking the science correctly stating that moisture diffusibility is not a big problem so don't worry – especially as the buildings are assumed to have humidity controlled ventilation in the research they provide. Of course they carefully avoid any mention of how often builders actually achieve the specified, required high level of airtightness in retrofits (almost never) nor that houses here have no humidity control (we have a damp climate). Often folk dry clothes indoors and have ineffective fans in kitchens and bathrooms adding to the moisture load.

As far as I can see the building science above suggests that cooling the wall and ensuring poor air tightness BUT ALSO thereby poor ventilation means that warm humid air is likely entering the space behind the insulation giving likely or even certain mould and decay conditions. Are there any reasons for me to be more optimistic about the situation?

Has this happened in North America? Are there any reports or research data on this problem?

John B.: It's definitely one of the best! I was wondering if writing about it would bring you out again. Nice to hear from you!

Paul P.: Nice to hear from you again, too! See Joe Lstiburek's article, Thick as a Brick, in which he discusses insulating mass walls in cold climates.

Bill Rose is a treasure and this book is one of the most beautifully written building science books there is. I'm so glad you have written about it again.

Great way to distill the essence of Bill's point! Simple and clear! Thank You!

PS: Amanda, thank you for the pointer on Twitter to his book a couple years ago. I have the Kindle edition that goes everywhere on my iPad.

Hiya. Yes, you're right, I should read that again.

In Germany recently, on a Passive House course, we got a calculation run-through from a building scientist of the consequences of using just one inch of PUR/PIR internally to a masonry wall with slow air leakage from inside. Not good! Not enough drying, more and more moisture.

And what will happen to the joists that go through the insulation and into the masonry wall? we asked. Well of course they will decay, he said.

I discussion of ancient building techniques that should be superceded by movement from frames and skins to composite construction where vapor barriers and breathing are combined with modern sheathings that replace wood and paint.

John N.: Thanks and you're welcome!

Paul P.: I'm not sure what PUR/PIR are, though I'm guessing the PU is polyurethane and PI is polyisocyanurate. What's the R stand for?

Tim S.: But the point here is that we don't need to worry so much about stopping vapor diffusion since it's responsible for such a small percentage of problems. Rain screens are good, but when you put a vapor barrier in a wall, you reduce that assembly's ability to dry.

alan s.: Do you work for the marketing department?

Yup, PU is polyurethane and PI is polyisocyanurate. The R stands for Rigid.

Maybe good to reference Straube on vapor barriers too.
http://www.rkeleher.com/documents/Straube_on_Vapor_Barriers.pdf
"in many high-performance enclosures none is needed" with caveats of course.