Posted by Allison Bailes on December 5, 2013

A new study from Lawrence Berkeley National Laboratory (LBNL) makes a bold claim that increasing ventilation rates can cut the number of student absences related to illness. The lead author on the paper, Mark Mendell, is quoted by LBNL's News Center as saying, "Our overall findings suggest that, if you increased ventilation rates of classrooms up to the state standard, or even above it, you would get net benefits to schools, to families, to everybody, at very low cost." But what did they have to assume to find that suggestion?

Their study was published in the refereed scientific journal, Indoor Air, and is titled, Association of classroom ventilation with reduced illness absence: a prospective study in California elementary schools. What they did was pretty simple, really. They put dataloggers with carbon dioxide sensors in 162 classrooms of 3rd, 4th, and 5th graders. The classrooms were in 28 different schools in different parts of California. The dataloggers measured CO2 levels and turned them into averages for each 5 minute period. The researchers monitored the CO2 data for two years.

When the researchers looked at their calculated numbers, they found that ventilation rates in California schools are mostly below the code-mandated rate of 15 cubic feet per minute (cfm) per person. The table below shows what they found. It's in liters per second rather than cfm. The reference point for your conversions is 15 cfm = 7.1 l/s, so you can see that only one of the lines below shows a rate above the required level. 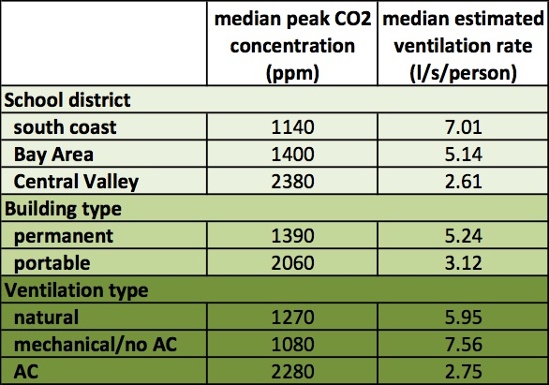 That's an interesting result! Where they went with that result, however, is a bit surprising.

Extrapolating from correlation to causality

One of the biggest traps in science is to confuse or conflate a correlation, two things that change together, with causality, a relationship in which one change causes another. It makes up a significant portion of what is called pseudoscience, and it's also great for humor. Perhaps you've heard that global warming is caused by the decreasing number of pirates?

The abstract of the article states that the authors assumed causality from the correlation they discovered between calculated ventilation rates and illness absences: "Assuming associations were causal and generalizable..." The News Center article quotes Mendell on the topic: "We saw a correlation, but we don’t know if it’s directly causal." That didn't stop him from saying, as quoted at the beginning of this article, "...you would get net benefits to schools, to families, to everybody, at very low cost" by increasing ventilation rates.

OK, let me get this straight. They found a correlation between two variables and then went on to extrapolate all kinds of benefits based on their assumption that higher ventilation rates cause fewer illness absences? Yep. They sure did.

And this was in a refereed scientific journal? Yep again.

As I said above, I haven't read the actual paper or seen all the data. Maybe I'm all wrong about this, but the case they made for causality in the News Center article and their research paper abstract was...well, they didn't make a case at all for causality. They just assumed it.

I think everyone in the field of building science understands that ventilation rates are related to indoor air quality (although they're not the only factor) and certainly can have an impact on health. My problem with what they've done here is that they should have concluded their paper by raising the many questions that still need to be answered:

What other variables do we need to account for? Poor kids get sick more than kids from families with more money, but I didn't see anything about that in the article.

What does the 21 day lag between changing CO2 levels and illness absences mean?

There are just too many questions left open to be rushing to judgment about doubling the required ventilation rates in schools. A scientific paper in a refereed journal should not make recommendations based on assumptions. What can happen in such cases is that, because they appeared in a scientific journal, those recommendations get picked up by media and policymakers as having a validity they just don't have.

Maybe in a few years we'll have enough data to back up their claims, but for now, it's way too early to turn their data into policy.

Correlation does not imply causality.

Photo of school children by US Department of Education from flickr.com, used under a Creative Commons license.

Darn! A real scientist. Oh well, the story sounds great as a headline -so it must be true. And I thought everything on the Internet had to be true.

At least I know Santa Clause will be here soon with my new bike.

This story points out one reason energy retrofuts often under perform. Initial assesments are biased by assumotions or lack of knowledge. Use of reference tables used to indicate if I add "x" inches of insulation, then I can expect "y%" savings. But we neglected to notice the thermal bypasses and disconnected ducts. Worse yet, we develooed slick on-line calculators that help homeowners run these analysis themselves. With no knowledge or experience, a 6th grader can blindly fill in the blanks and determine the top 5 upgrades that will save 45% on their home's heating and cooling bills.

I speak from experience, having developed and promited many of these toys as EE tools. They are great for general simulations and education aids to demonstrate macro concepts. Application to individual homes or buildings result in variances of +/- 100%, or worse.

Detailed, on-site, and comprehensive assessment, conducted by experienced, knowledgable, AND Open Minded professionals can still be biased, but is the best choice to start development of a comprehensive energy retrofit.

The way I see it, one doesn't need to be a Quantamegaplutonium Erectus Scientist to know that things work. Few years a go the USGBC had some figures about improved grades for students in schools with better ventilation and light. I had a client that her respiratory issues stopped after they moved in their new house with good IAQ. But my best scientific research came when I looked at my belly and concluded that Ice Cream was bad for me! Maybe I should publish that in AMA...

Whoa there! Talk about jumping to conclusions here. You should note that the toward the end of the article, it states: "However, the researchers don’t know how or why poor ventilation results in more illness absences, or if there is even a causal connection."

Additionally, there is a quote by the Mendel: "We saw a correlation, but we don’t know if it’s directly causal."

Finally, this article is a journalistic piece (NOT peer reviewed) referring to the paper (peer reviewed. You will need to read the actual paper to see if it actually states anything about a causal relationship.

Curt K.: "After this, therefore because of this." I had two years of Latin plus a class in logic.

geoff h.: Yes, it is a great headline, and it goes with what we know. It just goes too far. Just because some ventilation is good, it doesn't mean that more is better.

Armando: Funny you should mention grades. According to the article, "A follow-up paper on the effects of ventilation rates on test scores is expected soon."

LouisvB: Yes, I put that second quote from Mendell in my article. And although I haven't yet seen the full paper, the abstract states clearly that they assumed causality. See both of those in the section above titled 'Extrapolating from correlation to causality.'

Could be a good way for teachers to raise their students' Common Core scores, too.
I had a high school math teacher who swore his students did better in class because he left the windows in the back of the room open all year around for ventilation. I think it was the cold air pushing everyone to the front row seats.

Thanks for posting on this topic. The research in general suggests that more outside air reduces illness and makes us more productive. You can read my article in the Southface Journal:
http://www.southface.org/default-interior/Documents/journal/sfjv313_fina...

I have links to a few other studies in it. I can't say every study is correct, but the body of research is moving that way.

Good one Allison! Yes, this trap is easy to fall into, especially when the correlations lead toward the expectation set from previous experience and knowledge. Correlation does not imply causality. But correlation + expectation (based on previous experience and knowledge) does. The problem with acting on that is that it "implies" causality. It does not prove it.

The test score results will be interesting. If they are higher with more ventilation, will it from better performance from the students, or better teaching from the teacher? Or better grading as the result of less after hours drinking from having more fresh air and being less tired at the end of the day?!