Not long ago, Erik Henson an energy auditor with HD Engineering and Design in the Kansas City area, posted the photo below on LinkedIn. As you can see, frost has formed on the walls and ceiling inside the house. It's not uncommon to see frost on windows in cold climates. But walls? That's a rarity. What's going on here?

At those conditions, the dew point was 46° F. As you can tell from the photo, that part of the walls and ceiling were below 32° F, well below the dew point for the indoor air.

First, let's look at the building enclosure problem. The owners took the frost photo, and Erik went to the house a week later to check things out.

The photo below shows the attic right above where the frosty corner was. The insulation wasn't missing when he arrived. He pulled it back so he could see what was going underneath. As you can see, the framing and the electrical wire prevented the insulation from making good contact with the air barrier. Also, it's close to a soffit vent, and it was windy when the frost formed. 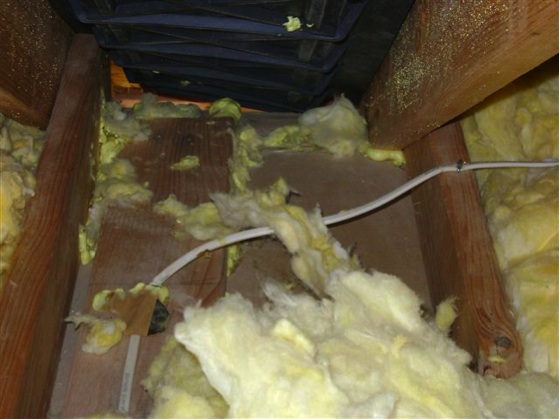 The other factor is the high humidity in the home. In the winter time, it's better to keep it lower, closer to 30% than 50%, to prevent moisture problems. 49% RH isn't horrible...unless it's really cold outside and your insulation doesn't work. The reason their humidity was so high was that they have 8 kids and kept the humidifier going 24/7.

While frost is a rarity, I suspect we have all seen similar patterns of mold and mildew on walls or ceilings. - Same factors, just not as extreme.

This photo needs to be included in training & inspection guides.

A rare winter find indeed. Two comments and a suggestion.

1. This looks to be part insulation, part wind wash, and part rh concern.

2. 43% rh is the recommended level for winter months. 46-50% is ideal for occupant health. 30-35% is ideal for building materials. It is here that the problem starts.

Relative humidity is incredibly hard to control in cold climates that experience 40+ degree swings over a couple of hours. This is compounded with insulation and air sealing and the absence of a fresh air circulation and management system.

Suggestion. It is easy to say "manage your rh" and walk away. The challenge that the energy efficiency industry had brought to our homes is one of durability and occupant health. The public has been told to insulate (by any means possible), they've been told to air seal (without explanation), now they are being told to manage relative humidity with even less instruction. Let's see more clarification, instruction, and even though costs associated with each of these steps and less finger pointing (unless it's back at the DOE and the energy efficiency industry for creating this mess)

Where is continuous vapour barrier/membrane, between gyps and insulation? The entire insulation job would be totally unacceptable in my humble opinion.

Questionable detailing along the entire eaves if the photo is indicative.

In Ontario during this cold winter, this is quite common, maybe not this extreme. When fibreglass is used as an insulation which it is not (it is an air filter)I often see this type of situation. This winter I hav seen water run out of wall assemblies with fibreglass batting in the framing and rigid foam board on the exterior of the sheathing. I have seen mega frost in attics where R40 light density fibreglass was on the attic floor and the tegular mushroom vnets and/or ridge vents were covered with snow. Proper balanced ventilation (using vents that don't get buried under snow) along with an air sealed attic floor and R60 of celluose fibre don't have these conditions. Stop using fibreglass and pay attention to detail will solve these issues. I have been fixing these and other building enclosure issues for 38 years by using materials and methods that work.

Ron, I beg to differ with your opinion that this is a material related issue. As a veteran of the insulation contracting and manufacturing industry for almost 50 years, I have seen my share of very similar situations, regardless of insulating materials used. It is almost always an application issue, not a material issue! The key to your statement is the very last part of your last sentance. Use methods that work! By the way, fiberglass is not just a filter material. You personally might not like it, but there is plenty of data out here that supports the performance of fiberglass insulation products. Knowledgeable professionals can essentially fix these types of problems by using combinations of products, if, and I repeat if, they pay attention to the details and the methods they employ.

Just came across this again. Some one asked about the location. As you look at the frost photo the left side is an interior wall and the right side is the west facing exterior wall. This is the master bedroom. The left wall divides the master bedroom from the master bathroom. This is Kansas City so we do not use a vapor barrier/ membrane on the interior portion of the wall.