The Fundamentals of Heating and Cooling Degree Days, Part 2

That's pretty straightforward. The base temperature is a balance point and has a nice, clear, conceptual meaning. It just doesn't correspond to an exact, constant number, which is how it's usually presented.

Factors that affect base temperature

I used 65° F as the base temperature in the previous article, but let's examine that choice. Why is it the baseline most often used in the US for heating degree days? According to the definition above, that would be the threshold at which you need to start adding heat to keep the building at a setpoint of about 68° F. (More on that discrepancy between base temperature and setpoint below.)

But in what building? With what kind of air and thermal control layers? How well is it shielded from changes in the outdoor environment? 65° F is probably about right for a building with a relatively weak level of air sealing and insulation. Maybe. Even a leaky, poorly insulated building won't need heating at 65° F if it's got a lot of internal heating loads (e.g., people or appliances). And a Passive House may be fine with just the internal loads down into the 30s or 40s Fahrenheit, perhaps even lower.

Here are a few of the factors that affect what the actual base temperature will be:

One interesting relationship came up when my cohort Jeffrey Sauls and I were discussing this topic. When you make a building enclosure more energy efficient with better insulation and air sealing, you reduce the heating base temperature. Jeffrey pointed out, however, that if you make the building more energy efficient by using more efficient lights and appliances, the heating base temperature goes up because the heating system has to do more of the work. If you do it right, the building enclosure improvements trump the light and appliance improvements by a lot.

Difference between base and indoor temperatures

In the US, we use 65° F as our base temperature, but we typically keep the indoor temperature at 70° F. Why don't we account for the other 5 degrees when we use degree days in the calculation? 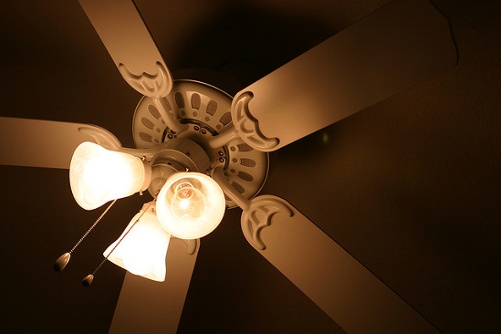 The answer goes back to the definition of base temperature. Recall, it's the balance point between needing the heating or cooling system to operate or not. If the temperature in heating season is above the base temperature but below the setpoint, the house is still losing heat through the building enclosure. It just doesn't need the heating system to make up for the heat loss because the internal gains (lights, appliances, and people) add enough heat to keep the house comfortable.

What are you using degree days for?

Despite these problems, having a uniform baseline is still good for some things. Being able to compare one climate to another is the main one. Since I know both numbers use the same baseline of 65° F, I can tell right away that the 14,000 HDD of Fairbanks, Alaska is much too cold a place for me. Give me Atlanta's 3000 HDD...with a few excursions to the 7000-9000 HDD skiing climates!

If you're doing calculations with degree days to determine the effectiveness of energy efficiency measures, it's probably worthwhile to, you need to choose a baseline appropriate to the building. Energy Lens, a UK firm that makes energy management software, has a great article about the intricacies of degree days. They also have one of the best sites for finding degree days for a lot of locations. It's called DegreeDays.net, and it allows you to generate degree days for whatever baseline you want to use.

Resolving the base temperature problem

The more important thing, though, is to keep in mind that you're not getting results to nearest BTU. Degree day calculations won't give you results to the nearest 100 BTU and probably not even to the nearest 1000 BTU no matter how good a job you do choosing the base temperature. It's an approximate calculation, and it's the relative changes that matter more than the numbers of British Thermal Units.

Doesn't mean it's not useful and can't be immensely helpful. It just means you need to keep it in perspective and understand the limits.

Photo of ceiling fan by Charles Williams from flickr.com, used under a Creative Commons license.

Other factors that affect base temp are
Wind chill and Solar gain. These are particularly troublesome to nail down into efficiency calculations. If it's morning before the sun comes up and windy my house may need heat when it's 60f degrees outdoors. If it's a sunny afternoon with no wind it may be 45f outdoors before I need heat. Base temp is a moving target that varies throughout the day. I've found 55f to be about right when doing year to year comparisons on my own house.

When using the conventional 65f it threw my calculations WAY off when comparing a record cold winter to a normal winter. That's what led me to do more investigating on base temps.
http://homeenergypros.lbl.gov/forum/topics/how-to-determine-hdd-s-and-sa...

To Bob's comment - that is why air temperature measurements (alone) are not a good measure of comfort regardless of what the Nest/Google people would have you think (that would be a different blog topic). Heating/cooling degree days are only good for comparing and measuring structure/system changes that affect energy use.

Thanks for taking time to write this informative article during this BUSY SEASON. Many wishes for a rewarding CHRISTMAS and HAPPY NEW YEAR!

It is incumbent for us to remember that not only are the degree days for any location variable from year to year. They are also on an upward trend. An issue that we wish was not true, but is real.
See slide 19 on the attached link
http://www.proctoreng.com/dnld/Proctor-DatanotDogma.pdf

Also, building mass, which is really overvalued for "R-value equivalence", DOES play a role here, as does the normal diurnal outdoor temperature swings. If you're in constant cold, that's different then cyclical excursions to temps below base temperature where the mass of the building can even things out.

If I'm calculating for ICF or other massive constructions, I typically give a nod to my base temperature to reflect that ability of the building to temporarily even out the milder swing temperatures.

I'd really love a simplified tool that allows a user to put in plug loads, building mass, design heat load, and zip code and have it run the building through a model year to give us a good estimate for DD base temperature.

So, is the absolute value of an HDD (or CDD) figure different depending on which temperature scale it is based on, leaving all other parameters unchanged? In other words, if an American quotes an HDD figure to a German, will the latter understand that figure, or will it have to be converted, just like °F has to be converted to °C?