Dr. Joseph Lstiburek started it in 2012 when, in his keynote address at the Passive House conference, he said igloos were the first passive houses and you don't need WUFI,1 the hygrothermal modeling tool, to design and build a good house. Dr. Achilles Karagiozis, one of the leading proponents of WUFI, struck back in a presentation at the 2013 Westford Symposium on Building Science. In it he described a scenario in which Joe was in a helicopter crash in Alaska and had to build an igloo to survive. At the Passive House conference this year, Achilles expanded on that same topic.

Last week at Building Science Corporation's (BSC) annual Expert's Session, the two of them presented on the same day in a daylong seminar on hygrothermal modeling. And as a bonus, Kohta Ueno of Building Science Corporation presented on his work on the modeling and monitoring of embedded wood joists in insulated masonry walls. Here's what you missed if you weren't there.

A lesson in water

"The three biggest problems in buildings are water, water, and water." Gus Handegord said this a long time ago, and it's still true. (Now I know who to give credit to for the variation on this quote I used in Matt Risinger's Summer Camp video.)

Lstiburek began his part of the hygrothermal modeling session with this quote and a beautiful explanation of the fundamentals of building science, the laws of thermodynamics, and the behavior of water. Although most of us are thinking about the flow of turkey and pumpkin cheesecake this week, it's the flow of HAM—heat, air, and moisture—that's of great concern in building science, and Joe showed how it works.

The central focus was on water, which, all by itself, is the three biggest problems in buildings. According to Joe, 80% of all construction problems are related to water.

The lesson covered the fundamentals, but Joe really shone when discussing the movement of water through porous media and through assemblies. He discussed the four—yes, four—phases of water.2 Liquid, gas, and solid are well known, of course, but adsorbed water behaves differently from any of those three.

The cartoon to the right shows the difference between adsorption and absorption. For water in porous materials, absorption would be liquid water filling the pores. Think of a sponge absorbing water. Adsorption would be just a few layers of water molecules lining the surfaces of the pores. Adsorbed water moves differently from water in the liquid or vapor phases, and that has significant implications for building science.

After explaining the basics, Lstiburek went into the details of the different mechanisms that get water moving through materials and assemblies, as shown in the table below, taken from the presentation slides (which you can download from the BSC website). He covered vapor pressure, concentration, Kelvin's equation, contact angle, and surface energy and made it all make sense. 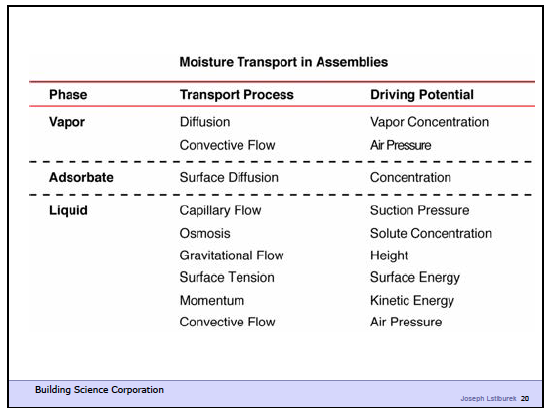 It was a really great presentation, and if you haven't seen Dr. Joe do this, I certainly recommend it. A lot of what he did here was part of his two-day Building Science Fundamentals class.

The task for WUFI

When heat, air, and moisture move through materials, assemblies, and enclosures, they do so with great complexity. Moisture, for example, can move via any of the mechanisms listed above. Also, things are always changing with time, of course, and a flow usually depends on the direction taken through an assembly as well. Properties change depending on which way you go. (The fancy physics word for this is anisotropy, and it's where the amazingly fun del operator, ∇, comes into play.)

WUFI models the flow of heat and moisture through an assembly. It can do a pretty good job with isotropic (uniform in all directions) materials or assemblies...if you get the inputs right. What that means is that you can get pretty good results for one-dimensional flows in the field of an assembly, such as a wall or ceiling. Last year I wrote about WUFI 1-D and showed that it can tell you how likely a material is to grow mold based on the moisture accumulation or drying over time. 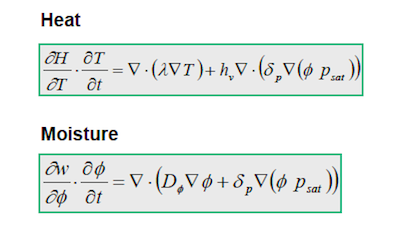 The equations that WUFI attempts to solve are shown above. The software does so numerically, and it requires the user to put in a lot of information about the assemblies being modeled. The solutions show heat and moisture travel across an assembly over time.

According to Joe, when WUFI came across the Atlantic from Germany, it didn't do a good job of incorporating air flow or rain. Now the software does a better job with them, getting closer to accurate modeling of the transport mechanisms shown in the table above. You still have to know how much wind-driven rain or air leakage to model and pick the correct weather location, but "WUFI is ready for prime time," Lstiburek said.

The uses of WUFI

When you use WUFI and get results, you can learn a lot about how an assembly or collection of assemblies might behave. One thing you can do is to model the performance of a new type of wall assembly to see if it will dry adequately.

You can also model the performance of a whole enclosure as a collection of assemblies. This is what WUFI Passive does. PHIUS allows Certified Passive House Consultants to use either the PHPP or WUFI Passive to certify Passive House projects. This version of the software incorporates the Passive House requirements, so it gives you a dynamic look at what's happening with the assemblies as well as the conditions inside the enclosure and whether it passes or fails.

Karagiozis said a hygrothermal analysis tool like WUFI is needed to address ASHRAE's design methodology. We didn't need it before, he said, because buildings were more tolerant of mistakes. Now, though, we need it because of:

We can use WUFI, Karagiozis said, to design for increased drying performance, better water management, and more forgiving systems.

According to Lstiburek, hygrothermal analysis is being included in more and more construction contracts these days, too. But is that a good thing?

The doctors' advice on the limitations of WUFI

Both Dr. Lstiburek and Dr. Karagiozis cautioned the audience on the limitations of WUFI. Karagiozis used the example of him trying to give his presentation by reading notes off a regular sheet of paper held up by Lstiburek all the way in the back of the room. No matter how good your eyes are, you're not really going to be able to read that piece of paper very well.

Karagiozis also said it's important to use the transport properties of the actual material that's going to be used in the assembly. You can't use generic properties because density, permeance, and other properties vary from one product to another. Extruded polystyrene (XPS) from Owens Corning, for example, doesn't have the same properties as XPS from Dow.

Lstiburek's statement about hygrothermal analysis increasingly being included in contracts was followed by a big caution sign. Mechanical and structural engineers, he said, are most likely to be the ones who have to do the modeling, but if they don't know the tricks of using WUFI, they'll get the wrong answers.

For example, he told us about a case in Houston where an engineer ran WUFI and found that the building's walls were getting wet from interior water vapor. So the engineer specified a vapor barrier beneath the drywall. "When you get the wrong answer, you shouldn’t be doing this," Joe said. What he meant is you shouldn't be doing this when you don't recognize that you've gotten the wrong answer.

In addition to what Joe and Achilles said, Kohta Ueno presented what he's learned so far in a Building America project they've been working on at BSC (which you can download from the BSC website). They've been modeling and monitoring the heat and moisture flows in embedded wood joists in insulated masonry walls, a fairly common construction. What he concluded was that using a 1-D model on a 3-D hygrothermal problem is not recommended, largely because of the great number of inputs and variables. He said you could spend a lot of time on modeling a problem like this, but it's probably not very useful.

When should you use WUFI?

According to Joe, WUFI definitely has its uses. And those uses are in assemblies that don't have a track record, like superinsulated, supertight Passive House projects. With R-40 truss walls or R-60 insulated rooflines, the margin for error is smaller, and WUFI can provide valuable insight into how those assemblies might work. You still have to follow up with monitoring the actual performance, but the modeling might be able to help you avoid costly mistakes.

"The tool is phenomenal," Joe said, but he wants to help reduce the mistakes people make by using WUFI. To that end, BSC is working on materials to help users learn what kind of tolerances they're dealing with. The BSC team is putting together lists of inputs that will produce certain results so users get a feel for the inputs and the outputs.

What happened to The Igloo Chronicles, Part IV?

If you've been following the debate from a distance over the past two years, you might think Joe and Achilles hate each other. Nothing could be further from the truth. They've worked together for a long time, and Joe talks admiringly about all the hours Achilles put in to read and comment on his doctoral dissertation. I got to spend time with them at the 2013 North American Passive House conference, and it's clear that these two men like and respect each other. (By the way, the blonde blur in the photo below is Betsy Pettit, Joe's wife and business partner at BSC.) 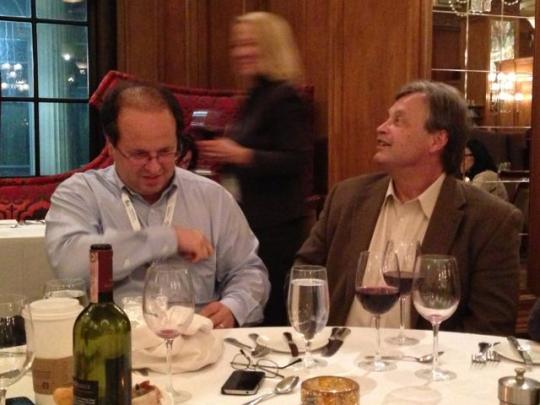 But I just wish they'd continued the igloo theme. I don't think either of them mentioned igloos once during the Expert Session on WUFI (although Achilles did mention candles3), so they killed my idea of calling this article, The Igloo Chronicles, Part IV.

1. WUFI stands for Wärme- Und Feuchtetransport Instationärs, which translates literally (according to Google's translator) as Heat and Moisture Transport Unsteady.

2. Since I was trained as a physicist, I thought the fourth phase would have been plasma the first time I heard someone talk about the four phases of water, but plasma doesn't really come into play in building science, unless you're working on a physics lab or nuclear fusion reactor.

3. In his earlier WUFI talks, Achilles described a scenario with Joe burning candles to try to stay warm enough inside his makeshift igloo to keep from dying after his Alaska helicopter crash. At the PHIUS conference this year, he also told the audience that Joe loves candles, especially scented ones, so if you want to be his friend, just give him a candle. So I gave him one last week. You should, too.

Nice post!&nbsp; <br />&nbsp; <br />Of course, I assume you really meant chemical potential, not vapor concentration as the driving potential for vapor diffusion and adsorbate surface diffusion. A minor point, I know, and sorry to repeat it if Achilles already went through that with you.

Of course, I assume you really meant chemical potential, not vapor concentration as the driving potential for vapor diffusion and adsorbate surface diffusion. A minor point, I know, and sorry to repeat it if Achilles already went through that with you.