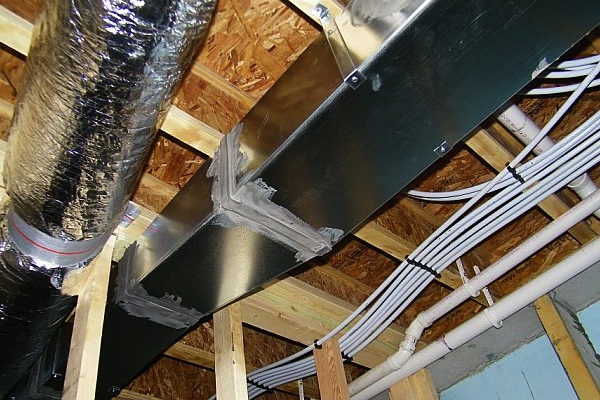 But that’s not the end of the story.  If it were, you’d always try to get the lowest velocity possible by using the biggest ducts that fit the space without blowing the budget.  There’s another relevant fact, however, and ignoring it can lead to trouble.

In moving air through a duct system, we want good air flow but remember that the object isn’t just to move air throughout the house.  It’s to move heated air in winter and cooled air in summer.  When that conditioned air is moving through the ducts, the second law of thermodynamics comes into play because we have a temperature difference between the inside and outside of the ducts.

The second law of thermodynamics says that when you have objects at different temperatures, heat flows from the warmer to the cooler object.  In winter, the warm air in our ducts can lose heat to the surroundings.  In summer, the cool air gains heat from the surroundings.

And the amount of heat that flows between the duct and its surroundings depends on three things:

The equation that ties these things together is:

Q here is the rate of heat flow and the units we use for it here in the US are British thermal units per hour (BTU/hr).

As the conditioned air moves through a duct, it gains or loses heat in proportion to those three factors above.  But that just tells you how many BTUs go into or out of the duct in an hour.  The other factor is how much air is involved in picking up each BTU.  The factor that governs this is velocity:

The slower the air moves in a duct, the more BTUs each cubic foot gains or loses.

And it’s not just time of contact that’s responsible.  To get the air moving slower, we need bigger ducts so there’s more surface area, too.  The upshot of all this is that when you’re sizing ducts, you have to consider the space those ducts are in.

If you put ducts in conditioned space, you can move the air as slowly as you’d like.  When you put the ducts in an unconditioned attic and have the minimum insulation allowed, you want to move the air at a higher velocity, pushing it up near the maximum recommended by ACCA Manual D, 900 feet per minute (fpm) for supply ducts and 700 fpm for return ducts.

My friend Mike MacFarland of Energy Docs in Redding, California is a home performance and HVAC wizard.  He knows the principles and has studied the research and he installs some of the best duct systems in the country.  He uses the following ranges of velocity for ducts in different types of space:

If you need a duct to move 100 cfm, for example, you’d go with a 7″ duct if it’s in conditioned space, a 6″ duct if it’s buried deeply in the attic insulation, and a 5″ duct for exposed ducts in an unconditioned attic.

The takeaway here is that low velocity is great for air flow but sometimes bad for heat transfer.  By selecting duct sizes that yield velocities appropriate for the conditions, you get the best of both worlds.

Is Low Velocity Bad for Air Flow in Ducts?

The Invisible Problem With Duct Insulation