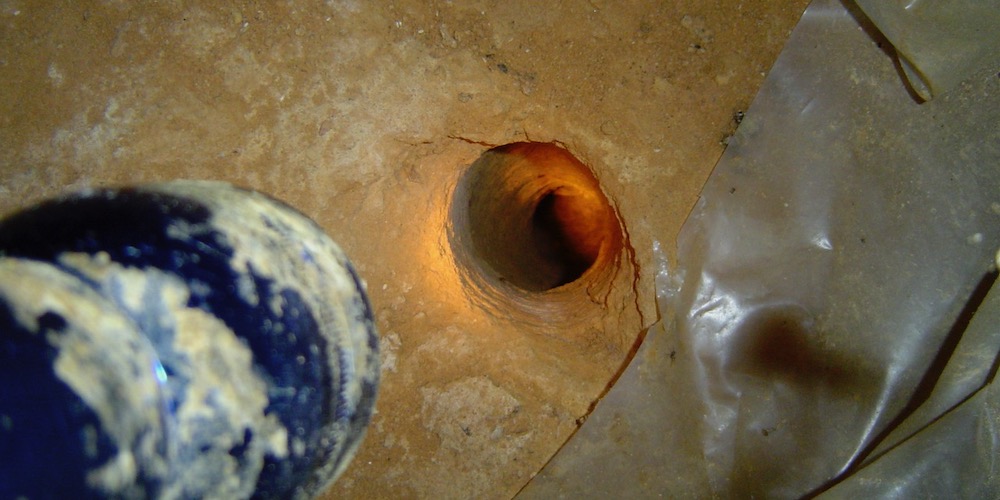 I taught Manuel about sealing the holes in air barriers, ducts, and crawl spaces.  He taught me how to face my fears by sticking my arm into holes in the ground.  Manuel was my best worker when I did home performance contracting—that’s him  doing some attic air sealing in the photo below.  But he was an even better at crawl space noodling.

Yes, I’m talking about that kind of noodling.  Catfisting.  Cat-daddling.  Hillbilly handfishing.  Whatever you want to call it.  The main difference is that it’s not catfish you find when you stick your arm into a hole in a crawl space.  Well, let me revise that.  It would be an unusual crawl space with a hole that yielded a catfish.  I know of only one where a crawl space noodler did pull in a catfish.

The norm for what you find in these holes, however, is spiders, rats, possums, snakes, and the like.  But every once in a while you find trash—old beer bottles and cans usually—someone’s forgotten drug stash, toys, and socks.  Lots and lots of socks.  (Now you know.)

Of course, crawl space noodling can get you a trophy to take to the taxidermist and mount on the wall in your living room.  The donican I pulled out of the the hole at the top of this article was my all-time favorite.  Unfortunately, it wasn’t suitable for mounting.  Also, I was so excited to get my first specimen of this elusive subterranean creature that I forgot to take a photo, so I’m left with only my memories.  (The pain from the bite in my thumb distracted me a bit, too.)  Manuel could verify this for you, but I lost contact with him many years ago.

But back to Manuel now.  When I hired him, he had construction experience, like most of the workers I hired.  But he also bragged about he liked to go into the places where no one else wanted to go.  His diminutive stature made it easy for him to squeeze into tight attic spaces behind kneewalls, and I thought that’s what he was talking about.

On our first crawl space encapsulation job with Manuel, though, he showed me his true strength.  We were cleaning the junk out of the crawl space  and saw the hole in that photo just above.  He rushed over to it and said, “Hey, bossman, watch this.”

He stuck his hand in there and felt around.  As his hand explored the hole, he turned and smiled.  “I think I got a good one,” he said to me and the other guys on the crew.  He sat quietly for a minute longer, inching his arm through the hole.  When he was in nearly to his elbow, he yelled and pulled his arm out so quickly we all jumped back.  Then he showed us the cutest little brown snake.  We took it outside to get a better look and we all got a chance to play with it.  That’s my hand holding it in the photo above.

Not all the critters we pulled out were so cuddly.

The most important lesson I learned from Manuel was that crawl space noodling isn’t about what you find in the holes.  It’s about heart.  To stick your arm in a hole you find under a house will bring you face-to-face with your deepest, darkest fears.  Winston Smith, the main character in George Orwell’s book 1984, was petrified by rats.  My fear was of a creature much more terrifying.  And when I reached into the hole in that photo below, I finally realized those fears to their fullest.

Before getting to that, though, I have to tell you a little about crawl space noodling methods.  First, as with all home performance work, you should always wear the right personal protective equipment (PPE).  Sometimes the hole is too tight and you have to take them off, but otherwise it’s a good idea to wear gloves.  Long sleeves also can help protect you from the other varmints who might see you as either prey or threat.

And you should never noodle in a crawl space without wearing a face shield and respirator.  Some of the things you find in those holes spray noxious chemicals.  That donican I mentioned earlier completely destroyed my face shield with its acidic salivary emissions.  Had I not been wearing a face shield, I would look like a very different person today.

The other part of crawl space noodling methodology you need to know is how to attract the right critters.  As it turns out, the odor of duct mastic attracts all kinds of interesting animals.  Possums, snakes, spiders, and naked mole rats love the stuff!  And so do armadillos, vampire moles, and donicans.  So, this is another great way to use mastic in holes.

Now, back to my greatest fear.  I had slowly inserted my arm past the brick in that hole above.  The main tunnel turned to the left, and I followed it as far as I could.  By that point, my whole arm and even my shoulder were in the hole.  I’d heard a little rustling and what I thought was a muffled growl, so I knew I had something good in there.

My heart was pounding.  I had to keep wiping sweat from my brow.  All I could think of was fierce looking eyes, sharp teeth, and the venom.  Especially the venom.  The creature of my greatest fears had me in a tizzy.  Based on everything I had read about it, I was certain this was the kind of place where I’d find it.  The sounds, the smells, the vibrations…It was all there.

I knew that as soon as I touched it—or it touched me—I was going to completely lose my composure.  (I always kept a spare change of pants and underwear in my truck for situations like this.)

And then it happened.  Something brushed across the skin on my forearm.  I slowly slid my arm back.  I felt a little bit nauseated and my vision got blurry, but somehow I got the critter near my hand.  With a sudden move I grabbed it and pulled it out.  Screaming at the top of my lungs, I rolled around on the ground, holding the little creature in my hand.

Finally, Manuel and the others calmed me down and got me to open my hand.  And here’s what I had caught.

That was 2006, and it was my last crawl space noodling adventure.  As you can tell, I didn’t find the animal that shook me to my core that day.  But I had faced my greatest fear without backing down.  Manuel was really proud of me.  I think of him often and the lessons he taught me.

If you ever visit my home, I’ll show you that little stuffed blue bird in my living room.  The taxidermist did excellent work!

The Misleading “Science” Behind Heat and Insulation

Photo of spider by Jean and Fred Hort and blue bird by CATS Pamuk from flickr.com, used under a Creative Commons license.  All others copyright Energy Vanguard.