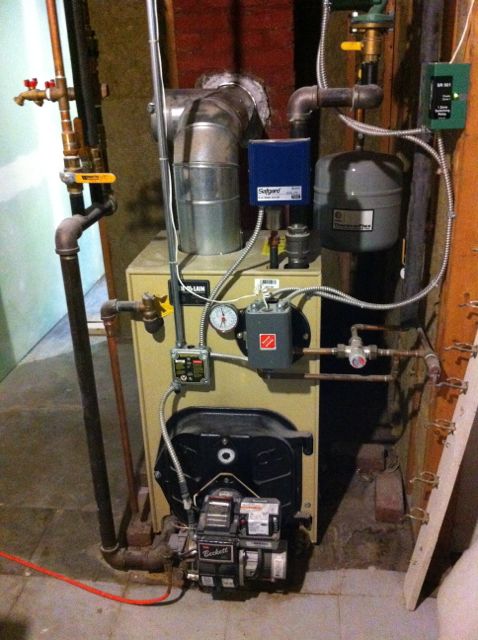 Boilers for heating homes are common in some areas. Not here in Georgia, where I live, but my friends in the colder climates have them. This type of heating equipment takes a fuel like natural gas or fuel oil, burns it to create heat, and then puts that heat into water circulating through the distribution system. Since it’s called a boiler, naturally it’s heating the incoming water up to the boiling point and creating steam. Right?

Some boilers do boil water and make steam. Most don’t. If you live in a home built since the middle of the 20th century, any boilers you find therein almost certainly do not boil the water. Instead of steam, they make hot water.

Some boilers are part of forced air distribution. The hot water passes through a hydronic coil in an air handler. The blower blows air over the coil and the warm air is distributed though a duct system. That’s a great way to provide supplemental heat when you have a heat pump.

The demise of steam heating

Since I live in the land of forced air, I don’t deal with boilers and hydronic systems much, so I asked around about steam heating. Dan Holohan, the god of steam heating and the creator of HeatingHelp.com, told me in an email, “Steam was very popular prior to WWII, particularly in the cities. Tract housing, the suburbs, and cheap furnaces killed it after the war.”

I knew that steam engines were dangerous in the past and that’s often cited as one reason that Robert Stirling invented the hot air engine (now known as the Stirling engine). I asked Holohan about that issue, and he told me, “steam boiler explosions were common during the 19th Century.”

A couple of changes, however, made them safe for use in homes. They were the Hartford Loop, mandated by Hartford Steam Boiler Insurance & Inspection Company, and McDonnell’s low-water cutoff. According to Holohan, these changes saved a lot of lives. I also asked another expert in the field, John Barba of Taco Comfort Solutions, about the reasons behind the demise of steam heating. He told me, “expense, complexity and the virtual cornucopia of alternatives have sent steam the way of the coal stove.” He also explained why it would be difficult to get a new steam heat system today: “The hardest part would be finding someone who could design and install it from scratch.”

I also posted my question in the HeatingHelp.com forum and found out a bit more about what steam heating is still out there. Robert O’Brien of Technical Heating on Long Island, NY, said it’s all in older homes. When I asked him if anyone installs steam boilers in new homes, he wrote, “No, no one does. Other than a few eccentrics, most of whom frequent this joint!”

Apparently a lot of older homes that used to have steam heating no longer have it. When the old systems needed to be repaired or replaced, they changed them out for another type. But there’s one big exception. O’Brien looked up some numbers for me and said that 65% of the 1 and 2 family homes in New York City still have steam heat.

There you have it. The two lessons for today are: (1) Most boilers don’t boil, and (2) Go to New York if you want steam heat. Or at least hang out over at HeatingHelp.com and find someone who can help you.

The 3 Types of Heating and Cooling Loads

Are We Off Track With Combustion Safety Testing?