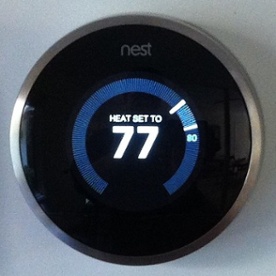 The Nest Learning Thermostat has been on the market for nearly four years now. One of the biggest things the Nest folks use as a selling point is energy savings. “Programs itself. Then pays for itself.” That’s the first thing you see when you go to the Nest homepage. But what do the data say? Three independent studies plus a whitepaper from Nest provide some answers.

The Nest Learning Thermostat has been on the market for nearly four years now. One of the biggest things the Nest folks use as a selling point is energy savings. “Programs itself. Then pays for itself.” That’s the first thing you see when you go to the Nest homepage. But what do the data say? Three independent studies plus a whitepaper from Nest provide some answers.

The first study was done on 185 Oregon homes that used heat pumps, and the study was conducted over one heating season (2013-14), with the report released in October 2014. Two nearly identical studies run by two different gas and electric utilities in Indiana looked at both heating and cooling in a total of 700 homes. The results were nearly identical, too. Finally, Nest published a whitepaper in which they analyzed the energy use of 735 Nest owners with gas furnaces and 624 Nest owners with electric cooling. (See links to all studies at end of article.)

A study in Oregon

This one was focused on heating with heat pumps. The goal was to find a way to reduce the amount of electric resistance heat that typically is installed as a supplemental heat source in heat pumps. The Energy Trust of Oregon, which launched the research project, was looking for an alternative to their “advanced heat pump controls measure.” As I showed in my recent article on Michael Blasnik’s presentation on big data from Nest, there’s a lot of opportunity for savings in heat pump supplemental heating.

Here what I think are two of the biggest results they found when they looked at the final data:

Then there were some interesting things that fell out when they analyzed the data in other ways. They looked at all kinds of demographics — age, education level, housing type, geographic location, and much more — and here are a few that struck me as noteworthy.

Although the results are encouraging, the Oregon report urges some caution:

We have some reservations about the reliability of the results from the subgroup analyses. Each subgroup comparison began with a relatively small sample of pilot homes and cut it into even smaller pieces to analyze. With such small samples to work with and so many comparisons that the team was interested in, there may have been random fluctuations in the data that resulted in observing spurious differences.

In other words, they feel more confident about the numbers based on all the participants, less so about the ones based on things like those who live in manufactured housing, those who used to have a different programmable thermostat, and those who floss religiously on Sunday, Tuesday, Thursday, and Saturday every single week. Also, the data cover only one heating season, so running it for multiple years would provide a better picture of what’s happening.

Still, one of the biggest takeaways here is that this study found good savings with the Nest thermostat connected to heat pumps. In their whitepaper, Nest discussed the difficulties of using setbacks with heat pumps and included a US Department of Energy warning: “Programmable thermostats are generally not recommended for heat pumps.” That’s because many of them tend to cause the electric resistance heat to run more as the heat pump attempts to recover from setbacks.

These two projects were done by two different gas & electric utilities in Indiana. The Cadmus Group conducted both studies and wrote the reports. Both studies looked at gas use during heating season and electricity use during cooling season. One of the studies had 400 participating homes, the other 300.

Here are the main results from both studies:

A whitepaper from Nest

This whitepaper is a good read even without the energy savings information because they discuss a lot of the issues around trying to determine whether or not a given measure saves energy and how you would go about determining the amount of savings. (Read the Background and Methodology sections.)

The Nest energy savings analysis is different from both the Oregon and the Indiana studies. They used “pooled” data from a control group of non-Nest users and compared to data from the Nest users. Both the control group and the Nest users are people who had been using the MyEnergy, a company that “helps customers track and analyze their utility usage and bills.” (Nest bought MyEnergy in 2013.) The chart below shows percent savings for the control group. Notice that the center of the data is at 0% savings. In contrast to the control group, the data from the Nest users are shifted to the right of the 0% savings line. The actual numbers they found for savings of natural gas for heating and electricity for cooling are:

The Nest whitepaper discusses potential biases and the issues surrounding using data from the MyEnergy customers. In the end, though, they conclude that there wasn’t any large bias in the results.

Yes, the Nest does save energy

The results here provide a lot of evidence that the Nest Learning Thermostat does indeed save energy. It saves on heating energy with both gas furnaces and heat pumps, and it saves on cooling with air conditioners and heat pumps. All four of the reports go into the details of their methodology, telling how they chose the participants, how they collected and analyzed the data, and more. (Use the links below to download the papers.)

One important thing to point out here is that the Oregon and Indiana studies used carefully chosen participants, and they installed the Nest thermostats for them. One question that comes up with Nest data sometimes is, what is the effect of having self-selected gadget-geeks or energy savers on the savings data? In those three studies, that’s a moot point. It seems that the average Nest owner will save energy even when they’re not the kind of people who would go out and buy one on their own.

Of course, not everyone buys a Nest because it saves energy. Some people get them just so they can adjust the thermostat remotely from the app on their phone. Maybe it’s even because it’s flossing day, and they have to get up early.

This Thermostat Setting Can Cost You Money and Make You Sick

Do Programmable Thermostats Save Energy?

If You Think Thermostat Setbacks Don’t Save Energy, You’re Wrong!