Fun in the Sun: The 2015 Solar Cooking Festival

If you've ever wanted to learn how to cook with the sun, the 2015 Solar Cooking Festival in Sacramento was the place to be. This is the second year of the event, hosted by Solar Cookers International. They had quite a variety of solar cookers on display, from simple, two-panel low-temperature solar cookers to large, high-temperature cookers with concrete bases. There was also a cook-off and lots of advice for those who want to learn more.

A plethora of solar cookers

I took a lot of photos and talked to a lot of people at the Solar Cooking Festival Saturday before last. At the festival, I saw three basic kinds of solar cookers:

Parabolic cookers. These were the reflective dishes like you see in the photo above. A reflective dish parabolic in shape will concentrate the sunlight in a small area. That's where you see the pan above. It can make very high temperatures because of the intense concentration of solar radiation in small place. The reflectors on these cookers were also highly polished, resulting in even better performance. Don't make the mistake of putting your hand in the place where all that sunlight is concentrated, though, or you'll get a very nasty burn.

Box cookers. They're generally simpler and less expensive to make. Well, they can be less expensive; they also can be more expensive, as demonstrated by the second one shown below. The basic idea is to put the food you're cooking inside some sort of enclosure to help keep the heat in.

One example of the middle range of solar box cookers is the Sun Oven, shown below. They've been around since 1986, and you can buy one for $349. My PhD thesis adviser, Liz Seiberling, had one and used it in her off-the-grid solar home in Florida. 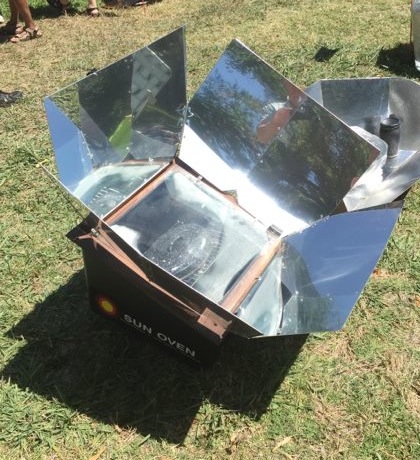 Another mid-range box cooker is the Solavore Sport, which sells for about $270. They just started up this year but look to have a really nice solar cooker at a good price.

At the top end of solar box cookers is the next one you see below, which is called the Quantum Solar Oven.† It's huge. It uses real glass mirrors for a higher reflectivity and thus higher temperatures. Although you can't see it, the thermometer inside this solar cooker was reading about 350° F when I took the photo. This one costs $1500, but they're working on bringing that price down. 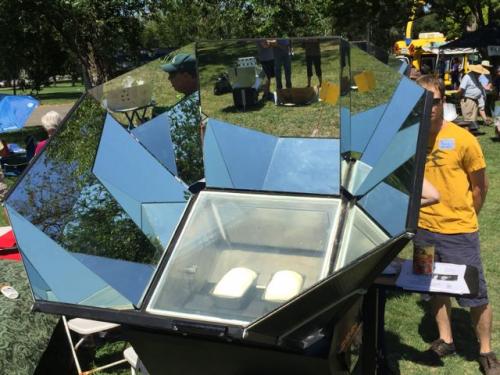 You can see two loaves of bread baking in it. They had two of these cookers at the festival and the other one had a pan of ribs going when I spoke with them. In the next photo you can see that it took them 1 hour and 50 minutes to cook the ribs, 25 minutes to bake the bread, and 20 minutes to bake a pan of muffins. About the same as a regular oven. 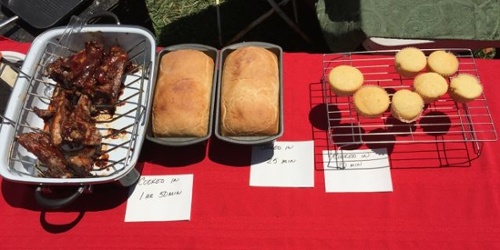 At the low end of solar box cookers are the homemade jobs. The can be made with simple, readily available materials like cardboard, aluminum foil, black paint, and duct tape. Here's one, and you'll see another in the section on my solar cooking past. 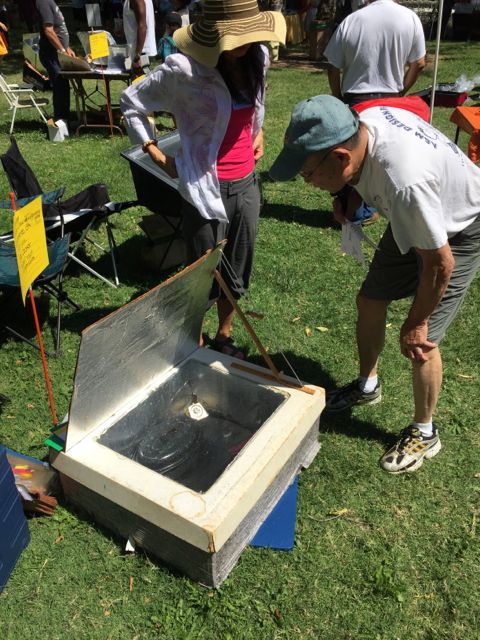 Panel cookers. I don't recall if this is the actual name used for this type of cooker, but it seems to be a good one. The organization that puts on the festival makes these to distribute overseas, and some people use them here, too.

This is about the simplest type of solar cooker. It's just two pieces of reflective material held together at an angle with the food being cooked in the space between, as you can see below. There's no glass cover over the space so it's not going to get as hot as a box cooker. And that's OK because one of the benefits of solar cooking is the enhanced taste of slow cooking. 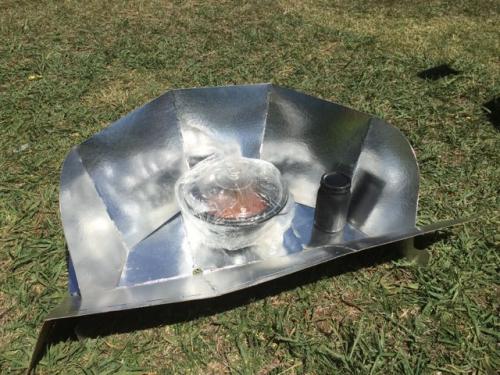 In case you're wondering, that is indeed a mason jar painted black. They make good containers to use in a solar cooker.

Fun in the sun

There was a lot going on at the 2015 Solar Cooking Festival. A lot of folks had set up their own solar cookers to demonstrate how they worked and what they could do with them. Some were companies selling their solar cookers. Others were individuals who love solar cooking. I also met a woman named Ilsa who makes a dairy-free nacho sauce called Nacheez and a man from Nevada City wearing an aluminum hardhat who told me how you can turn your car into a solar cooker if you have a deep enough dashboard. 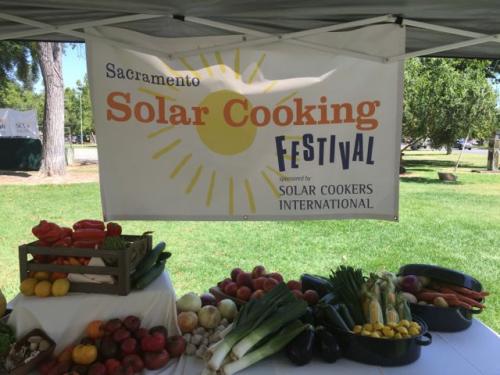 I was mostly interested in walking and talking, but for those who were so inclined, the solar cookoff seemed to be a big draw. Three teams competed to see who could make the best solar-cooked dishes. It was emceed by a real chef, and a panel of judges decided whose food tasted best. I suppose if I were a foodie I could tell you more about it, but I'm not. Guess you'll just have to go there yourself next year if you want to know more. 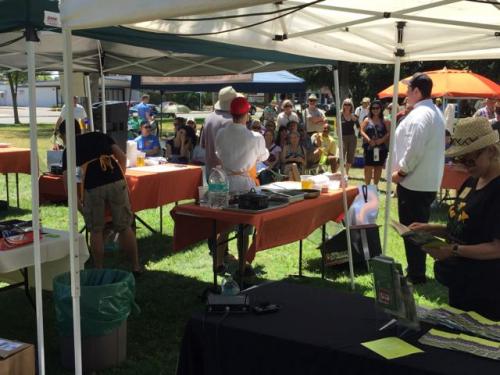 Naturally, you can't have a solar event in California without having a solar-powered band, so Alan and James of Solar Punch provided the solar-cooked music. 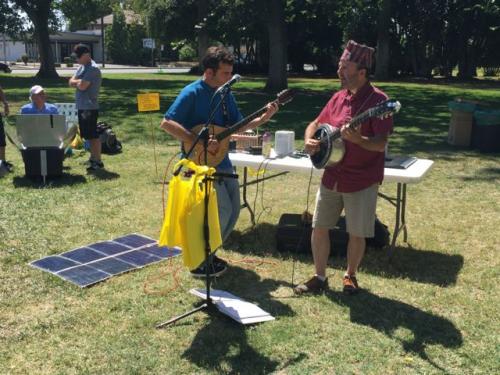 My solar cooking past

My interest in solar cookers began in the mid-1990s. I bought a book called Heaven's Flame by Joseph Radabaugh and then built the solar box cooker you see below from the design he included. Since I didn't have a molded plastic base for the cooker, I used my recycling bin to adjust the tilt for different sun angles. It worked well, and I made a few tasty meals in it. Then I moved to a shady yard and rarely used it again. 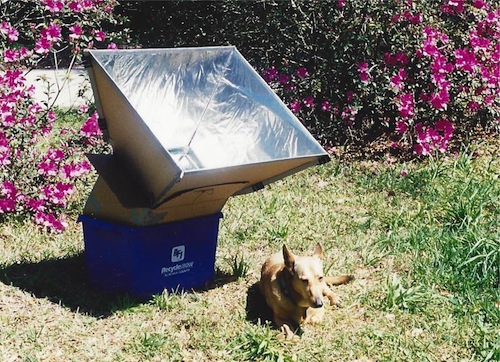 And that's Calli, the best dog ever, in the photo, too. She was a purebred American Short Shepherd. Heard of it? Part shepherd, part short legs, her breed is better known as Heinz 57.

An organization worth supporting

I found out about Solar Cookers International a few years ago when Marc Rosenbaum mentioned them in an article on Green Building Advisor. I've been donating to them ever since. Here's why:

SCI is a great organization doing lots of good work. The truth is that, because we have an abundance of energy sources here in the US and Canada, solar cooking will never be a big thing here. But it can be an amazing tool for people in those "sun-rich, fuel-starved" places. As they say on their website, "SCI’s unique role is to spread solar thermal cooking technology to the people who need it most."

All photos by Energy Vanguard except for the last one, which is from the Solar Cookers International website.

† The word "quantum" usually means something really small, yet so many people really, really want it to be the opposite. I think Planck, Einstein, and Bohr would get quite a chuckle over terms like "quantum leap."

In the '70's I used to camp with a group of folks (Hippies, back-to-the-landers, commune dwellers) who used home made solar cookers. The meals were somewhat variable in doneness as I recall. That may have been due to inattention because of the appetite stimulant that was commonly used at those get togethers.

Thanks for reminding me about Solar Cookers International. They are a great group helping people who can really take advantage of the technology.

Wish I could have been there! One day when I was bored, I cooked brown rice and sweet potatoes in a portable sun cooker version I "cooked up" using reflective car sun visor, clear shower curtain, diving weights and all purpose clamps. A pot with clear glass lid really helped. They cooked about as well as the stove top and oven. Agree that is a great organization to support!

I also give to that worthy organization. Great piece!