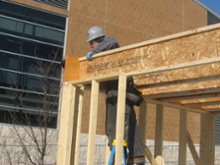 The tragedy of this is that in the effort to sell Advanced Framing as a whole package, presenting it as an alternative to Western Platform Framing, the sensible housing industry has thrown out the very easy and productive suggestions from the first list along with the bathwater that is the ill-conceived proposal of the grid dependent single top plate. By putting these all together and regarding this as a whole package, we are all complicit in the marginalization of what could be some very useful practices to increase efficiency in framing.

The tragedy of this is that in the effort to sell Advanced Framing as a whole package, presenting it as an alternative to Western Platform Framing, the sensible housing industry has thrown out the very easy and productive suggestions from the first list along with the bathwater that is the ill-conceived proposal of the grid dependent single top plate. By putting these all together and regarding this as a whole package, we are all complicit in the marginalization of what could be some very useful practices to increase efficiency in framing.

Rather, what we should do is what the housing industry has done all along. That is, jettison the notion of the grid and the single top-plate, and “re-brand” this as Advanced Framing Details. Get the industry adopting the useful practices from the first list. Rather than confound home builders with re-engineering their catalog of house designs let’s just hand them some common sense measures to save lumber and make small but useful advances in performance. More profit, more green. Win, win.

Reducing thermal bridging is the key

Now I hate giving up that single top plate as much as the next person, but the reality of this is the single top plate of Advanced Framing is not doing that much for performance. While Advanced Framing reduces thermal bridges incrementally it retains the basic structure of Western Platform Framing and all its inherent performance weaknesses. Notably the rim-joist space is unchanged, and this remains a difficult place to insulate and air seal.

Research will show that anybody in a significant heating climate shooting for high performance is already taking much more significant measures that eclipse the benefit of a single top plate. Reducing the number of thermal bridges is always good, but no wall assembly that is serious about high performance will be without some feature that interrupts thermal bridges with insulation.

Some common examples include:

Is Swedish platform framing the answer?

But none of these is truly the replacement for Western Platform Framing that Advanced Framing claimed to be. I do think one will emerge, however. My bet is on wall systems derived from standards developed in Scandinavia, which by the way is the only example of a mature housing market that has moved completely to high performance wall systems. I’ve studied them, and presented a new framing model based on their techniques: Swedish Platform Framing.

This is a natural evolution of Western Platform Framing, modified to:

Improve thermal performance by overcoming the inherent weak points of the Western Platform method, and lend itself to off-site fabrication, which will inevitably be where volume home building shifts in the future.

No more to say on that in this piece. If Allison will have me, I’ll come back to write more about that at some future date.

To close, I just want to say that I don’t blame Advanced Framing for these issues. It was not conceived with energy performance in mind. It’s up to us to own up to its limitations and to acknowledge what it does and does not do well.

If you are a fan of Advanced Framing, including the grid and the single plate, if you are training people to do it, or incorporating it into your own work, more power to you. It takes design discipline to work with its limits and extra know-how to build it correctly. You should be boastful about those skills.

If you are in a mild climate Advanced Framing may be enough to reach better than average performance levels. But we have to be realistic about Advanced Framing when working in more demanding climates. It simply does not deliver much performance for the effort of working to the grid in order to eliminate one plate. Selling it as a big improvement, and promising it as a significant green feature is just ingenuous, bordering on greenwashing.

We must do better and be brave enough to call out people that promote it as such. Finally we have to be realistic with our expectations for what  the industry will adopt. When history is telling us clearly that something will not fly, it’s up to us to accept that fact and look for more workable solutions. We only harm our own credibility and influence by promoting a technique that the wider housing industry has already rejected. Gregory La Vardera is an architect in practice, and a building scientist by training. Outside of his local practice he is focused on opening up niche markets in housing, and is interested in the development of broadly adoptable strategies for high performance building including off-site manufacturing of houses. You can read his blog for more info about the Swedish Platform Framing method and other topics.

Common Sense – The Best Green Building Skill in the World