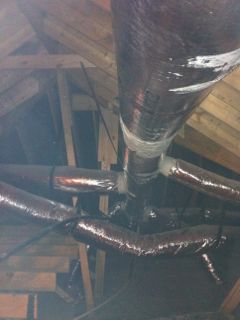 The air has been thick with spring for weeks — and I do mean thick. The pollen count in Atlanta this year has set records, our highest getting over 9000. We had a warm winter and a condensed spring. Now the heat of summer is just around the corner, and that means air conditioning here in the Southeast.

Attics are already heating up. I know because I’ve been in a few, including the one shown in the photo on the left. So, let’s think about what these facts mean.

Attics are getting hot.

Ducts are in the attic.

OK, we’ve already discussed that putting ducts in the attic in a cooling climate is a dumb idea and will cost the homeowners about 20% extra on their air conditioning bills. Today, I want to point out a way to make ducts in the attic perform even worse. Take a look at where the ducts are in that photo above.

Yep, they’re up high in the attic. Here’s another important fact about attics.

The attic temperature increases a lot with height.

The difference in temperature, ΔT, between the air at the bottom of the attic and up near the roof deck can be 20° F. That means that putting the ducts high in the attic can add 20° F to the ΔT, which means more heat flows from the hot attic into the cold air inside the ducts. ducts in an unconditioned attic.

Mistake #3: Running the ducts up near the rafters where the temperature is higher.

Why did they make mistake #3? And what was mistake #2? This house had a steep roof, which gave them plenty of headroom in the attic. Someone had the idea to install an upflow air handler (shown at right) because they had the space to do it.

If you look closely, you can see that not only does this configuration put the ducts high in the hot attic, but the back of that supply plenum is even touching to roof deck. In this house, the roof decking has a radiant barrier, which helps keeps the temperatures a bit lower, but the attic will still be hotter than outside, as it was on the day I was there. About the only thing they could’ve done worse for the placement of the ducts in this attic would be to run them right up against the hot roof decking, as shown at left. That photo is from a different house, and it’s about the worst thing you can do to ducts in an unconditioned attic.

Mistake #4: Put the ducts right up against the roof deck.

What do you do with problems like this? First, you avoid them with design so you don’t have any ducts in an unconditioned attic. This happens during the design of the house because designing a duct system that works with the rest of the structure and mechanicals is not a trivial matter. We work to prevent this type of problem in our HVAC design practice.

If you’ve already got this problem in your house, it’s more expensive to fix properly. One way would be to encapsulate the attic by putting spray foam insulation along the roofline. Another would be a duct system retrofit to get them into the house or lower in the attic. Retrofitting the duct system just to get it lower in the attic would probably not be cost-effective, though.

Lowering the attic temperature by installing a radiant barrier might be cost-effective in some cases, mainly if it’s easy to install and you do it yourself, I’d think.

If your ducts are high in the attic and poorly insulated, you might want to add more insulation. Of course, if that’s the case, they’re probably also leaky and it might be better in that case to do a complete duct retrofit.

Those are a few ideas on how to overcome the problem. I’m sure our readers have more, so let’s hear them.

Two Open Doors to the Attic – A Building Science Nightmare

The Cable Guy Did It! — Attic Insulation Gone Awry