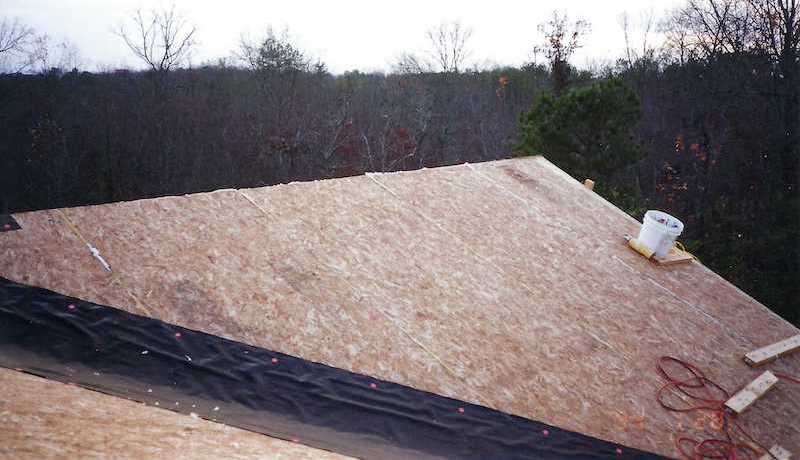 Ten years ago, I spent a fair amount of time up on the roof of the SIP house I was building. Now, Martin Holladay, the famous Energy Nerd of Green Building Advisor, has an article titled Martin’s Ten Rules of Roof Design. That’s spooky! Say it’s just coincidence if you will, but you can’t deny that numbers have meaning.

Well, anyway, I’ve had this topic on my list of articles to write for a long time, and now that Martin’s written one in greater detail—and with stronger opinions—than I was planning, I’m mostly going to let you go read his rules. It’s a great piece, and as he states before he gives them: “I have strong opinions about roofs. Without apology, I hereby present my opinions.” Don’t let the opinions deter you from reading the article, though.

Most of his rules basically say, Keep it simple. He’s also got some others that seem to go against current trends. One of those is his rule number 6: Asphalt felt makes more sense than synthetic roofing underlayment. It’s hard to read anything about roofs these days that doesn’t recommend the peel-and-stick membranes for underlayment. Of course, Martin wrote an article a while back about how durability wasn’t necessarily green, so he’s no stranger to controversy.

Let’s look closely at the roof of that house in the photo above.  Can you see where the trouble spots are?  The first thing that jumps out at me is that almost the whole front of the house drains to two points. (See arrows on photo below.)  One is just to the right of the front door.  Most the water that hits the right side of the roof on the front drains to that one little point.  There’s no way that little gutter can handle a moderate Georgia rainfall, much less a heavy rain.  Then, the other big drainage area comes down to a point to the left of the front door, just behind and a bit to the left of where the tree is.

The other problem I see here is really part of the same thing. Before all that water comes down in those two places, a lot of it will slam into walls. The valleys funnel the water down to those walls, so they better have some really good flashing in those areas…and keep it maintained!

Martin’s got several photos similar to the one above.  They show complex rooflines full of dormers, valleys, nested gables, and other needless details. My wife always says these are of the School of the Silly Rooflines when we see such houses. Evidently, some architects think that complex rooflines look better and builders think it’s what home buyers want.