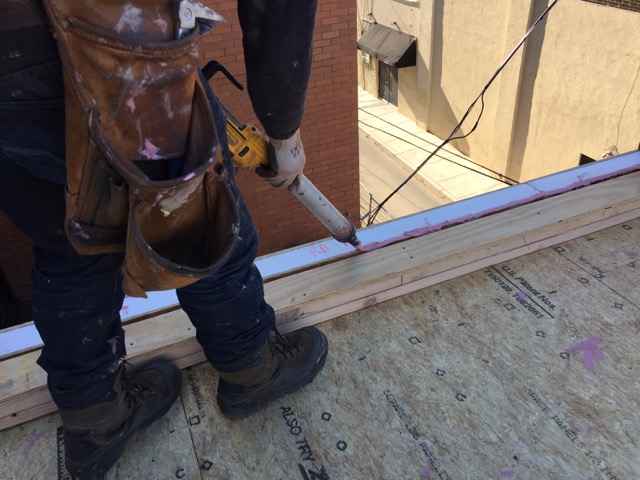 If you want to build a superinsulated, airtight house, you run into some difficulties. How do you deal with the extra thickness of your walls and ceilings when you add all that extra insulation? What’s the best way to ensure you hit your airtightness goal? And how do you do all that while keeping the process manageable and the cost affordable? The new Build SMART panelized system has some answers. I saw it in Philadelphia, twice

At the 2016 North American Passive House Conference in Philadelphia this past September, Adam Cohen presented on his new panelized building system. His goal, he said, was to develop a way to make it easier to achieve Passive House level building enclosures. He also wanted to make it affordable. Over the past few years, he tried out his ideas and found a system that worked. Cohen then partnered with Prosoco to take it to market it and make it scalable. Thus was born Build SMART. Last month I took another little trip to Philadelphia to see the Build SMART system being installed. Rob Leonard, who’s been working with Cohen for 15 years and is the field technical manager for Build SMART, met me ahead of time and gave me some background on the company and briefed me on the project I would be visiting.

The next day, Rob and I met up with Tim McDonald, a builder, architect, and Certified Passive House Consultant. The two were giving a tour of McDonald’s project and the Build SMART system. McDonald is building a really neat four story apartment building in the heart of Philly. The project is going to be Passive House certified and was well underway. They had the first three floors already done and were about to start the fourth floor.

Here’s a little of what I learned on the tour and from my other reading and discussions.

When you want to build a superinsulated house, you have several choices on how you increase the R-value. They all result in thicker walls. Some methods use all one type of insulation in one place, as in double-stud walls. Most methods have insulation in two places, somtimes with different types of insulation in different places. An example would be framed walls with insulation in the cavities along with more insulation (e.g., foam board or mineral wool) on the exterior. The Build SMART system is the latter type. The photo above shows a small sample of what a panel looks like. It includes a framed wall on the interior (left), OSB sheathing in the middle, then a layer of expanded polystyrene (EPS), and Huber’s Zip sheathing on the exterior (right).

The panels come in four types:

The options are currently limited to a few configurations for each type to keep the process simple and affordable. Some architects may feel too constrained by that, but McDonald sees it as an opportunity to be more creative with the design. For this project, he’s working on some cool ideas with LED lights that make a statement about the energy use of the building.

When you’re ready to start assembling the walls, you put everything together in a similar way to doing a structural insulated panel (SIP) building. The first step is staging. You get all your panels moved to where they need to be. In the photo below, you can see all the palates of panels waiting to be installed.

Once you’ve got the panels staged, you start at one corner and keep adding panels. Each panel gets attached to the one you did just before. When you’ve made it all the way around and are back at your starting point, you’re ready to build the next floor above or put the roof over it. A critical part of the assembly is making sure you get the air barrier all sealed up. In this case, the primary air barrier is the OSB in the middle of the panel. The photo below shows a worker installing sealant (Prosoco’s R-Guard Joint & Seam Filler) with a sausage gun. The water resistive barrier is Zip sheathing and that gets sealed up, too. Huber makes both a tape and a fluid-applied sealant for the seams, and Build SMART recommends that builders opt for the fluid-applied. You can see in the photos that McDonald followed their advice.

Benefits of the Build SMART system

In his presentation during the tour I attended, McDonald said, “The best thing about this system is that the panels come with windows installed.” This is a big deal. Most water and air leakage problems in walls occur at windows. It’s not easy to get the flashing details and air sealing done properly with a site-built house.

Yes, if you’re a custom builder and have a stable crew, you can get good window installations consistently. When the windows and doors come factory-installed, however, your job on the site becomes a whole lot easier. And faster.

Another thing McDonald emphasized was how quickly he could finish a project. The Capital 2 project he’s working on is going up at the rate of one story per week. That’s about 5,000 square feet of floor area dried in, insulated, and air-sealed in one week.

They do foundations, too

Another thing the Build SMART team has developed is a form for slab footings. The photo below shows a section of it. It’s a hunk of EPS lined with a vapor barrier. You put rebar inside, fill it with concrete, and voilà — you have an insulated, watertight foundation footing or slab edge. Is Build SMART the answer?

Well, nothing is the answer that solves all our construction problems. There’s no silver bullet. But the Build SMART panelized system sure does help you get a nice, superinsulated, airtight building that can meet the rigorous standards for Passive House certification.

It’s a new system, and they’re still improving it. When I posted a photo from my visit to Philly on LinkedIn, Professor John Straube made a good observation about air barriers. He said the system looked nice but his “only caveat [is] to add is that you also want the air barrier to be inspectable during construction in a perfect world.”

With this system, the airseal between panels is hidden behind the framing on the interior. If there’s enough of a gap and the exterior hasn’t been sealed yet, light coming through will show places that got missed. There’s not always enough of a gap, though. If a missed seal is behind framing that doesn’t have a gap, you won’t be able to see light coming through. This is far from a fatal flaw, and I expect the Build SMART team to come up with ways to overcome it. For now, make sure the crew putting the panels together understands the importance of sealing every joint and seam and that there’s a good quality control process happening concurrently.

It may not be the answer, but it certainly helps move high performance building forward. McDonald’s perspective is that Build SMART is “one answer to ‘scaling’ affordable multi-family Passive house and Net-Zero-Energy buildings in this country.”

7 Things I Learned at the North American Passive House Conference

A Vivid Demonstration of the Benefit of Exterior Insulation