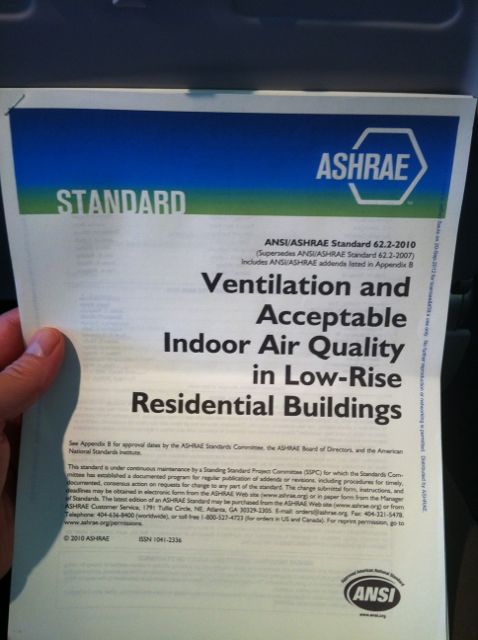 Just because I haven’t written about the jockeying over ventilation rates and strategies with the ASHRAE 62.2 committee doesn’t mean nothing’s going on. If you’ve been following the battle over this issue, you know that Joe Lstiburek, PhD, PE, got fed up with ASHRAE and introduced his own ventilation “standard” in 2013. Then the “Great Ventilation Debate” happened in Detroit, and he got back on the ASHRAE 62.2 committee. Stuff happened and now RESNET just put an interesting amendment out for public comment. Follow that?

Just because I haven’t written about the jockeying over ventilation rates and strategies with the ASHRAE 62.2 committee doesn’t mean nothing’s going on. If you’ve been following the battle over this issue, you know that Joe Lstiburek, PhD, PE, got fed up with ASHRAE and introduced his own ventilation “standard” in 2013. Then the “Great Ventilation Debate” happened in Detroit, and he got back on the ASHRAE 62.2 committee. Stuff happened and now RESNET just put an interesting amendment out for public comment. Follow that?

A brief history of the recent battle

Let’s go over the recent history quickly because we want to get to the current state of affairs, right? (Plus I’m on an airplane that will be landing in an hour and then I’ve got to go watch the fireworks with my stepson. No, really. It’s the 4th of July.) So here’s my quick chronology.

Got it? That’s where things were last time I wrote about this issue.

In 2014 I started going to the ASHRAE 62.2 committee meetings. The June meeting that year was in Seattle. Joe Lstiburek and Max Sherman spoke to each other, as you can see below, but not much happened at that meeting.

No, the first big move came at the 2015 meeting in Atlanta. There the committee voted on proposals to lower the ventilation rate and give a credit to balanced ventilation. The vote at the meeting was in favor of those proposals, but when absent committee members voted later, the proposals failed.

At the 2016 meeting in St. Louis a week and a half ago, the committee voted again on lowering the rate. They wanted to take the square footage part of the equation from 3 cfm per 100 square feet of CFA to 2.2 cfm/ 100 sf.

Those in favor of higher rates made various arguments to support their reasoning, but none had any hard evidence behind them. Max Sherman made what I thought was the worst argument: He quoted the first ASHRAE president as saying, “Ventilation is next to Godliness.” What he didn’t say was that in the 19th century, medical doctors often advised people to keep their homes closed up because they thought fresh air made people sick, so the big battle then was just to get any ventilation at all.

When the committee voted, the result was 10 in favor of lowering the rate and 8 opposed. The motion failed because it needed a 2/3 majority.

Following that discussion, the committee considered a proposal to give a credit to ventilation systems that distributed the air throughout a home. The vote was similar. A majority voted for the credit, but not a 2/3 majority. It failed, too.

Meanwhile, at the code hearings…

While Lstiburek was trying to get his ideas adopted into the ASHRAE 62.2 standard, he was simultaneously working to get them adopted into the building code. Last year, the International Code Council (ICC) voted to adopt the BSC-01/ASHRAE 62.2-2010 ventilation rate: 1 cfm per 100 square feet of CFA + 7.5 cfm x (number of bedrooms + 1).

This ventilation rate is now codified in the International Residential Code (IRC). Now things are getting interesting.

Last week, RESNET sent out a notice of a proposed amendment to the home energy rating standard. The changes mostly have to do with how the ventilation rate is calculated for the reference home, but there are a few other updates in there, too. If you download the proposed amendment, you’ll see that references to the 62.2-2013 rate are struck through and replaced with 0.01 x CFA + 7.5 x (Nbr+1) cfm.

I asked Dr. Joe about the amendment, and he sent this response in an email:

If RESNET does not adopt this amendment then there is a high likelihood that the proposed IECC code change allowing RESNET to provide an alternative path for code compliance will lose at the Final Action Hearings in Kansas City in October unless the proposed code change is modified to bring it into compliance with the IRC. Building officials do not like third party groups setting important code changes such as ventilation rates that the Building Officials do not get to approve as part of their code process.

He’s right, and there’s an important point in here that often trips people up. I got confused about it myself when I was new to the home energy rating field. A HERS rating is just an analysis. There are no thresholds you have to meet to “pass” anything. It’s supposed to be an objective look at the energy use of a house compared to a “reference home.”

That’s what Lstiburek is saying in the first paragraph above. The reference home, by definition, is supposed to be based on the code. Now that the code and ASHRAE 62.2 have parted ways, RESNET has to make a choice. Do they want to stick with the building code, as they should? Or will they follow a ventilation standard that’s not being used? I’m in favor of sticking with the code.

This is an important issue. Let your voice be heard. Go to the RESNET page for this amendment and post your comments.

Nota bene. This evening (7/5/16) I’ll be starting a six-day, silent meditation retreat, so I won’t be commenting here except possibly a bit before I go into silence. Your comments will still be able to be published, however, as Andy Bell will be taking care of that. Be nice! I look forward to reading the discussion when I emerge from the retreat.

The Great Ventilation Debate – Live at Affordable Comfort! (May 2014)