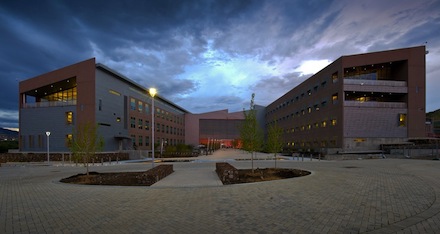 ASHRAE† is meeting in Denver this week, and my friend Robert Bean, the mastermind behind the Healthy Heating website, tweeted the other day that they’re going on a tour of NREL’s new net zero energy building. I’d love to go—both to the meeting and the tour—but will have to wait for another opportunity. I did check out the NREL page on their Research Support Facility and am impressed.

ASHRAE† is meeting in Denver this week, and my friend Robert Bean, the mastermind behind the Healthy Heating website, tweeted the other day that they’re going on a tour of NREL’s new net zero energy building. I’d love to go—both to the meeting and the tour—but will have to wait for another opportunity. I did check out the NREL page on their Research Support Facility and am impressed.

While there, I found some links to other resources, including a paper from 2006 titled, Zero Energy Buildings: A Critical Look at the Definition (pdf). I’ve been on a bit of a net zero energy (NZE) kick here lately, and wrote a bit about the controversy over the definition in my article about Matt and Amy’s NZE home in Asheville, North Carolina.

In that article, I gave a brief introduction to the issue of differing definitions, including the role of hippie electricity and off-the-grid homes. The NREL paper, however, does a much better job of it than I did there, so let’s take a quick look at their four definitions for a net zero energy building. (They call it a zero energy building, but I don’t like that term.) First, though, let’s address the issue of where the renewable energy is generated.

Before defining net-zero, the report goes into the boundary issue and determining what counts as on-site production of energy. The table below shows their list of supply-side options. Note that energy efficiency is first.

In the discussion of this issue, the paper states, “Typically, the only area available for on-site energy production that a building has guaranteed as ‘its own’ over its lifetime is within its footprint.” Anything you put on the ground could be lost to development.

In the first definition, an NZE building produces as much energy on-site as it uses on-site over the course of a year. If the building uses 10,000 kilowatt-hours, it’s got to produce 10,000 kWh or more, ideally on-site within the footprint of the building.

This definition doesn’t account for the type of energy used, though. Where this becomes important is if the building uses natural gas, propane, or some other fuel besides electricity.

Let’s say your home has a natural gas furnace, and it’s 95% efficient. For every 95 kWh of heat that your home needs, your furnace is burning 100 kWh of natural gas. (Pardon the units, but since the energy produced is in kWh, I’m going to stick with that.) That means you’ve got to provide 100 kWh of site-generated electricity.

As you can see from this example, this definition of net zero favors on-site electricity use. It’s also the simplest of the four definitions.

A net zero source energy building produces as much energy as it uses, but you account for the source. For an all-electric building, the site and source definitions are the same.

With other fuels, however, you have to account for what happens at the power plant to do the conversion. One kWh of electricity delivered to your home from the utility company’s power plant, for example, was originally about 3 kWh of heat at the plant, leading to a multiplier effect of efficiency when you save electricity on-site.

That multiplier effect also works the other way. As I said in the last section, the definition based on site energy favors electricity over gas. With the definition based on source energy, you have to account for the energy lost at the power plant and in transmission when calculating the amount of electricity you need to produce to cover the natural gas burned on-site.

This definition clearly favors natural gas. It’s also not so simple because the actual site-to-source conversion factor for a given location is likely to be different than the national average. It also changes hourly, depending on which plants are operating.

A net zero energy building based on energy costs is one in which the building earns as much money from selling electricity produced as it pays for energy bought. It’s an appealing definition to accountants, I suppose, and of course everyone would like to be net zero or better in energy costs.

The problem is that, “as utility rates can vary widely, a building with consistent energy performance could meet the cost ZEB goal one year and not the next.” In addition, utility companies often pay you their avoided cost rather than the same amount you pay them for the kilowatt-hours you buy. That means you’ll need more on-site production than you would in the definitions based on site or source energy.

A building that achieves net zero energy based on emissions, “produces at least as much emissions-free renewable energy as it uses from emissions-producing energy sources.” How easy it is to do this depends greatly on the type of energy used and the location. A building in the Pacific Northwest, which has a high percentage of electricity generated by hydroelectric plants, can reach achieve net-zero energy emissions without much difficulty.

The NREL paper (pdf) does a good job of elucidating the issues around the definitions of net zero. I think the most common definition in use is the net zero site energy building. It’s certainly the simplest, even if it isn’t quite fair to fuels other than electricity.

Another important issue that I haven’t really addressed here is what constitutes site-generated energy. Photovoltaic modules (a.k.a. solar panels), wind turbines, and solar thermal count. Fuel cells, which turn fossil fuels to energy on-site, do not.

The definition of net zero energy in buildings may not be quite as complex as “what the meaning of the word is is,” but it’s not as as simple as you might imagine either.

† Yes, I use a lot of acronyms and initials here. If you’d like to have a handy dandy list of common acronyms and initials used in the field of green building, energy efficiency, and building science, you’re in luck. I put one together and am constantly updating it. As of right now, it has 140 terms, and you can download it here.

Photo of NREL’s Research Support Facility used with permission of NREL under the terms of their End User Image License Agreement.