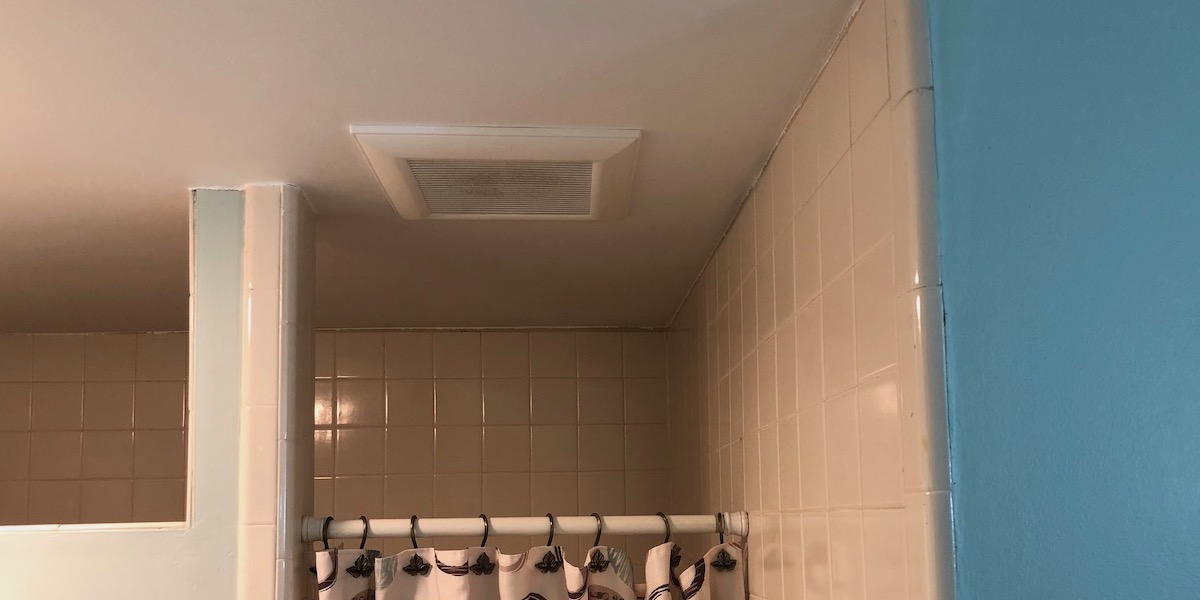 I’ve spent a lot of time in attics looking at problems with insulation, air sealing, HVAC systems, and ductwork. I’ve also seen why so many bathroom ventilation fans don’t move much air. A typical bath fan is rated to move 50 cubic feet per minute of air when it’s operating, but most actually move about half of their rated air flow. Here are 5 reasons why this happens.

1. No duct, fan blowing into insulation As you can see in the photo above, there’s no duct attached to this fan. Usually, no duct means better air flow. The air doesn’t go where you’d like it to, but it flows easily. Except when it doesn’t, of course, as in in this case. Here, instead of blowing into an open duct or open space, the air hits compressed fiberglass insulation. Bam! Not much comes through. You can see from the dark spot on the fiberglass that some air does escape, but it won’t be much here.

The fan shown below does have a duct. But let’s follow that duct and see where it takes the air. First, it goes over a ceiling joist in the attic. Then it goes into a piece of rigid duct that goes right up to another ceiling joist. There might be a quarter inch gap between the duct and the joist, not enough to let much air out. (Even with a bigger gap, though, you don’t want to vent your bath fans into the attic because you need to get the moisture out of the house completely.)

That duct needs to go all the way to the outside to do its job. I’m sure the installer just took his lunch break and will be back any minute to finish this up. Right? Oh, wait that duct was installed decades ago. Maybe he’s not coming back.

Here’s another fan with a duct that starts off OK. …just as we get tired trying to find out how far this thing goes, the air inside gets too tired to make it all the way to the end. The wire spiral that gives flex duct its round shape also gives it extra friction, especially when it’s not pulled tight, as you see here, so the air flow just peters out. I don’t know why this happens so frequently, but it seems that nearly half of the bath fans I see roughed-in at predrywall inspections are mounted so that the duct immediately makes a 180 degree turn on its way to the outside.

As stated before, flex duct has a high friction rate, and it’s easy for air not to have the oomph to make it through imperfect installations. Not only does it have to make that turn, which reduces air flow, but the duct isn’t pulled tight, which reduces it even further. They’ll be lucky to get half the rated flow out of that fan. (But, hey, they have a radiant barrier!) If the duct is supposed to be going one way, the installer needs to install the fan housing with the duct opening facing that way.

Unless your bathroom has a large gap between the bottom of the door and the floor or some other way for air to get into the bathroom, the bath fan will quickly be pulling against a pressure that makes it difficult to move much air. Every cubic foot (or cubic meter for those of you outside the US) of air that the fan removes from the bathroom must be made up by a cubic foot (or cubic meter) of air coming in. When those cubic feet get hard to pull in, they aren’t going out as easily either.

What this means is that you need to run the bath fan with the door open for a while to get a decent amount of air exchange. Don’t just turn the fan off when you leave because it probably hasn’t done enough yet. There are plenty of nice timer switches available for this purpose.

These five problems aren’t the only ways that your bath fan’s air flow might be compromised, of course. People who work on houses are a creative lot. What have you seen?