A lot of home builders and homeowners are getting certified home energy ratings to find out how efficient their homes are. There's also a lot of buzz about HERS ratings, with builders looking at them as a tool for marketing their homes. As I described in our basic description of home energy ratings, this process models the energy performance of a home and comes up with, among other results, a number called the HERS Index. But what exactly is this thing called the HERS Index?

There are a lot of ways to approach that question. My objective here is to focus on the mechanics — how the HERS Index is defined and how it's calculated. For greater depth on the mechanics or more on HERS ratings in the broader context, see the links at the end of this article.

Here are the fundamental ideas behind the HERS Index:

The image below shows the scale for a home with a HERS Index of 65, which would be 35% more efficient than the Reference Home. 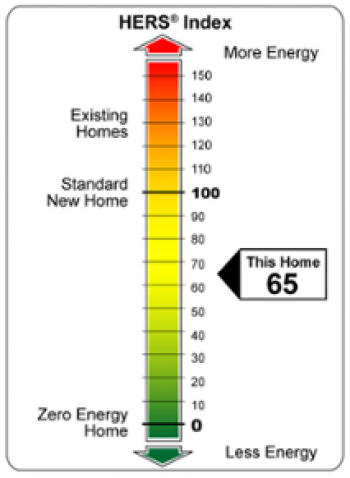 The HERS Index equation

If the basic info above isn't sufficient for you, the HERS Standards would be the ultimate place to go for more details. For example, if you wanted to see the actual equation used to calculate the HERS Index, you could go to page 3-4 in chapter 3 and find it. To save you the effort, I've pasted a copy of the equation directly from the HERS Standards below. 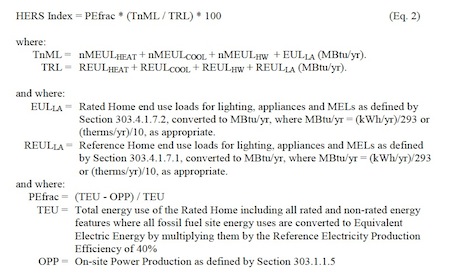 Yes, it's ugly, ugly, ugly! You could spend a while sorting through all the horribly-named variables, but, since you're reading this article, you can skip right over that bit of ugliness above (Have I mentioned how ugly it is?!) and get the idea behind it from my simplified version of the equation, shown below.

Much better, right? The E stands for energy consumption, WH stands for water heating, and LA stands for lights & (some) appliances. PEfrac needs a separate explanation, which I'll give you shortly. To be fair, though, there's still a lot hidden in both versions of the equation you see above. Calculating those four individual components (heating, cooling, water heating, and lights & appliances) involves a whole lot of definitions, specifications, assumptions, and yet more equations. Chapter 3 of the HERS Standards, which contains the technical standards for HERS ratings, is 44 pages long and is constantly being updated, revised, and amended.

Now, what about the PEfrac part? First, the PE stands for 'Purchased Energy,' so that gives you some idea of what it does. It's a multiplier that can reduce the HERS Index for homes that produce some or all of the energy they use over the course of a year. Here's what the equation for PEfrac looks like, again simplified from the HERS Standards to make it more understandable:

The HERS Reference Home

One aspect of the HERS Index that bears further scrutiny is the HERS Reference Home. Here's what the HERS Standards say about it:

“The reference home is the geometric twin of the rated home, configured to a standard set of thermal performance characteristics, from which the energy budget, that is the basis for comparison, is derived.”

Basically, the Reference Home is the same size and shape as the rated home and is also in the same location and IECC climate zone. The inputs for insulation R-values, window U-values, HVAC system efficiency, and similar factors are defined in the HERS Standards but are close to what's in the 2006 IECC.

The really important thing to know about the HERS Reference Home is that it's your reference point, hence the name. Yes, the energy code that it's based on has advanced, but we don't want to go changing our reference because if we did that, the scale would change. That would be like changing the definition of the mile just because our modes of transport got faster.

Likewise, the HERS rater industry in Canada is just getting going and could adopt a different HERS Reference Home. If they want to be able to compare their homes' HERS Indices to ours in the US, however, they need to keep the same definition of the HERS Reference Home. Otherwise it's apples and oranges, and CRESNET's Cross-Border Challenge would be difficult to judge.

That's it. A HERS Index is a number that compares how a given home's energy use to a reference point, which is the HERS Reference Home. Numerically, it's like golf scores - the lower the number, the better. I've seen scores above 200 for really bad houses and a low score of -2 for a net-zero energy home in Tennessee.

The equations above show how to calculate it. As they always say, though, the devil's in the details, so if your intention is to write software to be used as an accredited HERS rating tool, you'll need to spend a lot of time poring over the HERS Standards. If you're just looking for the overview with some detail about what goes into calculating a HERS Index, I hope this article gave you what you needed. If not, leave a comment below.

How Is a Home’s HERS Index Calculated? by Martin Holladay at Green Building Advisor

A Canadian Perspective of the HERS Rating Industry

I know many Building Science pros lament the rising juggernaut of RESNET and its HERS rating, especially those in the Northwest who have developed the arguably superior Energy Performance Score(EPS), but it clearly is becoming the dominant national measurement tool. I, for one, say if you can't beat them join them. Here in Santa Fe, NM, where we have had mandatory HERS ratings on all new homes since 2008 and mandatory minimum ratings of 70 since 2009, we have a well-developed cadre of top-notch HERS raters who have become somewhat of a pain in the neck to RESNET as they constantly collaborate, question, and prod RESNET to improve the process.

Most, if not all of them, are active members of our local HBA and its Green Building Council, which has been a tremendous asset to our organization and the continuing education of our members. There are still some bugs to work out, such as giving passive solar and thermal mass its proper due (trombe walls are still seen as windows and heat loss)and my own personal pet peeve is that the reference house assumes 13 SEER air conditioning. So even when you have NO air conditioning, which is not unheard of in our Zone 5 at 7000 feet, the reference house still calculates energy use as if you were running the AC. Another troubling area for me was when we designed a hydronic heating system using the Life Breath Clean Air Furnace that made its hot water with a combination of solar thermal backed up by an on-demand water heater, the calculation for energy consumption was based soley on the AFUE of the back-up water-heater.

Minor quibbles. The good news is that RESNET seems to be more open to the inputs from its growing army of raters and their providers, which can only improve the data. The other good news is that they are creating a tremendous national data base that can show how much energy and dollars are saved with every drop in the HERS index for every climate zone and for every mix of local utility costs. This is valuable micro information as we determine the cost/benefit analysis of energy codes that are demanding ever greater energy savings and therefore lower HERS indices. The NAHB and DOE would do well to help RESNET develop and perfect that data base.

Thanks for the informative article for the newly initiated.

Not hard to tell that this was written by a PhD! ;-)

Allison, do you feel up to providing some clarification on this? It would be most appreciated.

The real problem is that no two raters rate the same home the same. Just like Manual J, the inputs of course change the outputs and there is a lot of difference between what raters enter into the equation.

Someone can help me here, but it used to be that you did not have to do blower door or duct blaster tests to end up with a rating. I still bet you don't have to test anything about the furnace or air conditioner.

John, the inputs should not be substantially different from one rater to another. If both are being honest and not gaming the system the ratings should be virtually identical. One rater should be able to verify the other's number and the rater's provider (who they work under) is obligated to guarantee the veracity of the reports.

One doesn't need to test to come up with a presumed number, but one absolutely needs to test to come up with a verified number. Only a verified number can be used to accurately describe the home. The tests include blower door, duct blaster (unless it is a non-forced air heating) and visual inspection of insulation. They should also be inspecting for Thermal Bypass and air-barrier details, but that is not yet required for RESNET. It is for Energy Star, however, and many HERS raters are coming up to speed on how to do those inspections.

Thanks for this much simplified explanation of what a HERS analysis is. I well understood it, but I am not sure that the average home buyer would understand all of the details.

Ken - while certain programs have floating "refrence homes" (based on size, etc...) it does not apply to the base target or refrence home. This base target home is the exact same home but based on 04/06 energy standards which would give you the HERS 100 number.

Thank you, Sean. Your explanation makes perfect sense. I had envisioned a bloated reference home floating around in the Energy Star universe with no tether. (Did you like this visual I've now planted in your mind?)

I shall sleep better tonight.