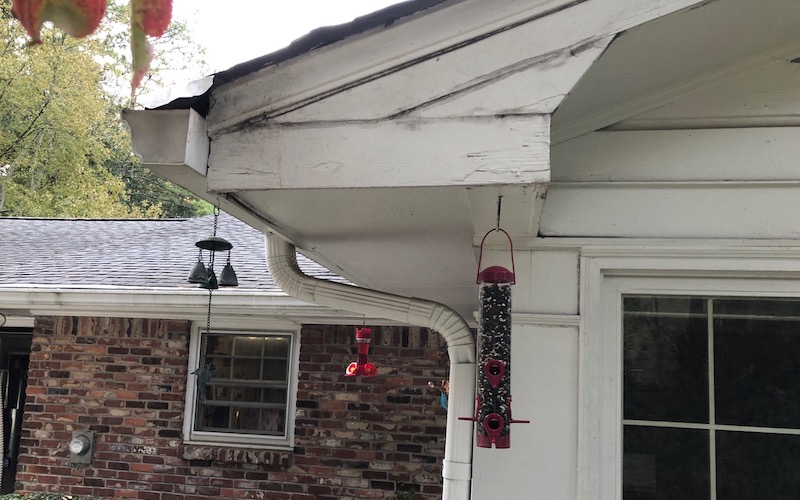 The number one thing you need to do to protect a building is control water.  As the Canadian building scientist Gus Handegord said, “The three biggest problems in buildings are water, water, and water.”  So, with the 1961 house I bought this year, one of the first things I discovered was the failure at the edge of the roof.  The gutters weren’t working well, resulting in water getting into places it shouldn’t be and rotting out the soffit and fascia boards in multiple places around the house.

Last week, we had a contractor out to begin fixing the water problem by replacing the soffits, fascias, and gutters.  The first step, of course, was removing the old stuff.  And that’s when an air-sealing and insulating opportunity arose for me.  Let’s take a look.

What is behind those boards?

When the soffit space was opened up, I learned a few things.  First, the sheathing behind the brick veneer on our 1961 house is gypsum board.  I was expecting asphalt-impregnated fiberboard, like I found behind the brick veneer on the 1970 condo I owned before moving here.  That gypsum raises a host of questions that I won’t explore here, but the second thing I learned is that the electricians took the easy way out because of this material choice.

In the photo below, there are two wires coming from the attic, going across the top plate, and then into the wall through a hole punched in the gypsum.  Hey, it’s a lot easier to knock a hole through gypsum than drill through three inches of wood top plates, right?  In addition to the wire holes, the gypsum sheathing, which is where the continuous air barrier should be, was broken in other places, too.  See that big hole between the two wires? The third thing I learned is that when spray foam installers are encapsulating an attic, they can miss insulating and air-sealing over the top plate of the exterior wall.  I wrote about this problem in my article last week.  The photo below shows what happens.

The spray foam installer can’t get a good angle to make the foam stick in that open gap and they usually don’t put blocking in there.  So the foam overshoots the gap, which is clearly evident below.  Note the spray foam shadow where the end of the ceiling joist is.  (See that article, Spray Foam Insulation at the Edge, for more details.) Also to be noted in the photo above is the seam between the pieces of gypsum sheathing.  There’s no tape or other kind of sealant to cover that gap, so there’s another place that air can go into or out of the walls.

How to fix it

Since this attic is encapsulated with spray foam, the solution is easy.  I got myself a couple of two-part foam kits (photo below). The next photo shows one of the rafter bays after spraying.  I did three things there:

There were no wiring penetrations in this bay but I sealed those up wherever I saw them, too. If I were dealing with a vented attic instead, things would have been more difficult.  I still would have sealed all the seams, edges, and penetrations in the gypsum sheathing, but I wouldn’t have filled the rafter bays with spray foam.  That would eliminate venting from the soffits.  To keep the attic vented and get the top plate sealed and insulated from outside would be important but tricky.  I’m interested to hear what others have done in that situation.

When the soffit contractor’s workers got the first part of the soffit opened up, I missed some of the sealing.  I had a foam gun and three cans of foam as well as a two-part foam kit, but that first kit didn’t work.  I did the best I could with the gun, but it wasn’t up to the task.  It killed me to do it, but I had to leave about 20 feet of the rafter bays and sheathing incompletely sealed and insulated.

Later, I was talking to the contractor and lamenting having to watch his workers cover up that one part of the house without sealing it up first.  He said, “That doesn’t matter.  It’ll be sealed up once we put the soffits and fascias back up there.”

He’s a smart guy and does really good work.  He doesn’t often have to think about where the air barrier is, though.  In this case, what he said was incorrect because that space in the soffit is connected to other places.  It’s connected to the vented attic over the garage.  Also, the fascia isn’t sealed at the top edge, which will be covered — but not sealed — by the drip edge.  The soffit and fascia are not the air barrier. The soffit crew is just about done with installing the new stuff.  The photo above shows the front of the garage.  Soon we’ll have the painters come do their thing and then have the soffit company come back and install the new gutters.  At that point, we will have made a big stride in solving the problems of water, water, and water.  And I snuck in and helped with the problems of air and heat, too!

The 3 Rules of Air Leakage