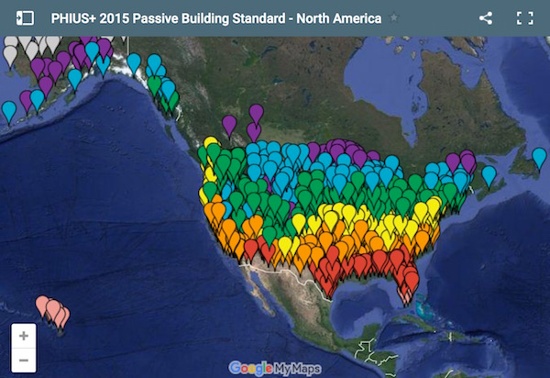 There’s this thing called passive house. It’s a terrible name. Almost everyone agrees on that. Look at how its adherents are driven to a frenzy and you’ll see that the name doesn’t really fit. The houses themselves aren’t passive either, but let’s leave that aside for now. Let’s talk about numbers and objectives. The North American Passive House program of PHIUS grew out of the German Passivhaus program, which has one set of targets for the whole world. Now PHIUS has adapted the German standard to suit North America. It’s an important change. And the frenzy of the adherents has been fun to watch!

There’s this thing called passive house. It’s a terrible name. Almost everyone agrees on that. Look at how its adherents are driven to a frenzy and you’ll see that the name doesn’t really fit. The houses themselves aren’t passive either, but let’s leave that aside for now. Let’s talk about numbers and objectives. The North American Passive House program of PHIUS grew out of the German Passivhaus program, which has one set of targets for the whole world. Now PHIUS has adapted the German standard to suit North America. It’s an important change. And the frenzy of the adherents has been fun to watch!

First, let me say a few words on terminology. When I use the word “Passivhaus,” I’m referring to the German program promulgated by the Passivhaus Institut. When I use the term “Passive House,” I’m talking about the North American program of PHIUS (which, by the way, stands for Passive House Institute US). And if I use the term “passive house,” in lower case, I’m talking about the whole concept.

The two basic Passivhaus requirements put limits on a home’s heating load (either peak or annual) and on the primary energy (also known as source energy). Here they are, as shown on the PHI website:

They added cooling load requirements similar to the heating loads for places that need cooling. The PHI standard also has an airtightness requirement (≤ 0.6 air changes per hour at 50 Pascals, ACH50) and a comfort requirement based on temperatures in the house. Then you look a little further and find other measures for the efficiency of the ventilation system used and the U-values of the windows installed.

Yeah, there’s more detail in there when you really dig in, but it’s really a simple, elegant standard. It’s really appealing to think all you have to do is meet a few requirements that are the same the world over.

But will it work for North America?

Professor John Straube wrote a critique of the Passivhaus program in 2009. He compared homes designed to meet Passivhaus requirements with homes in the US Department of Energy’s Building America program. It’s a great read and a good starting point to understand why the Passivhaus standard needed modification for North America. Here’s his conclusion:

Achieving the specific Passivhaus target of 15 kWh/m2/yr for heating on site energy use, results in investment of materials and money that often will exceed other less costly and environmentally impactive solutions. Achieving the equally arbitrary 120 kWh/m2/yr has more direct environmental benefits than the heating target, but may best (i.e., with least cost and environmental damage) be achieved using some on-site or renewable off-site power generation.

As new clean, local, and renewable energy sources come on line over the next 25 years and become more affordable than current PV prices, it is unlikely that the extreme conservation measures taken by Passiv Haus to meet the specific requirements will be considered an optimal deployment of resources for cold climate housing.

Lloyd Alter of Treehugger saw Wilson’s article and wrote about it as well. In his 2010 article, Passivhaus: Too Rigid and Inflexible for America, he summarized Wilson’s critique and ended with, “Good points all.”

PHIUS was an independent organization working as the agent of PHI in North America when Straube and Wilson wrote their critiques. In 2011, PHI canceled the contracts it had with PHIUS. In 2014, PHIUS introduced its new climate-specific passive house standard.

In the standard adaptation report, they wrote of the problems with the one-size-fits-all approach, “In some climates this has led to very costly projects; in others it has produced significant thermal comfort issues.” [p. 5] I’m likely to be accused of denigrating PHI by writing this, but the truth is the Passivhaus standard needed modification. Here’s another quote from the report:

Almost every project offered a new climate challenge. These circumstances sometimes resulted in projects that had the same overheating problems as early “mass-and-glass” designs from the 1970s. In other instances—in Louisiana for example—the German-derived standard did not account for humidity loads and predicted cooling demands inaccurately. [p. 5]

As a result, PHIUS made some changes while keeping the overall structure and intent of Passivhaus. It’s still passive house, but now it has diverged from Passivhaus a bit. Here are the main changes:

Source energy:  (1) Change from per square foot basis to per person; (2) Change the source energy factor to the US average of 3.16; (3) Base the lighting and miscellaneous electrical loads on American numbers (from RESNET); (4) “Set the source energy limit to 6,200 kWh/person/year and tighten it to 4,200 kWh/person/year within a few years;” and (5) Account for photovoltaic (PV) inputs or other on-site renewable electricity the same way solar hot water is.

There’s a whole lot packed into those three items! The first one is something that some of us have been calling for for a long time. I wrote about the problem with ACH in two articles (here and here) back in 2010. As Wilson noted in his article, ACH is biased toward larger houses.

The source energy changes are mostly about making the program fit the reality of North American buildings and giving PV a fair shake. The more fundamental change is going from a target based on floor area to one based on the number of people. Exploring that last part is probably worth its own article.

And finally, making the standard climate specific is only one of the big changes, and that happens with the heating and cooling load targets. Now instead of 4.75 kBTU per square foot or 3.2 BTU per square foot, you use the targets developed for the climate where the project is located. Go to the PHIUS+ standard page and click on a location on the map to find out what your numbers are.

A lot of science that went into developing this new passive house standard. PHIUS worked with Building Science Corporation using a US Department of Energy grant. I’m tempted to jump into explaining the optimization process right now, but let’s save that for another time. I’ve already thrown a lot at you in this article. If you want to understand the science behind the changes, download and read the standard adaptation report (pdf).

PHI has made some tweaks to Passivhaus over the years, and it’s better than it used to be. That’s great. The changes made by PHIUS are more extensive and, I believe, more suitable to the realities of construction in North America.

Stop complaining; we’ve got work to do!

One of the main goals of passive house is to decrease our impact on the environment, right? We’ve got some serious problems that we can help solve by reducing energy use. We ought to be looking at the best way to do that. It’s ludicrous to think that the number 4.75 was handed down from God. (I heard it was written on the back those tablets Moses brought down from the mountain.) Our goal is to design, build, and renovate buildings so they’re comfortable, durable, healthful, and energy efficient. Passive house could, and should, be the best way to do that.

The Passivhaus program as it existed when it came over from Germany 15 years ago was flawed. Martin Holladay at Green Building Advisor is another critic who’s been pointing the way to a better program over the past decade. Here’s a sketch he made clearly illustrating that the program had problems. Which scenario do you think will save the most energy?

We don’t always have the ability to spread out those seven layers of insulation among seven houses, but we’ve got to keep our eyes on the bigger picture. Unfortunately, a lot of people seem to have myopia when it comes to this subject. If PHIUS gives a rationale for its modified standard, we’re accused of “denigrating PHI.” Because we’ve modified the standard, we’re told we shouldn’t call ourselves passive house. If we say, “Less filling,” they say, “Tastes great!” We just can’t win.

Get over it already! PHIUS does passive house. We have a modified standard. We’re here to stay. Now, we’ve got work to do. Anyone who’s interested, come along and join us. Or do it your own way. If you’re curious to find out what PHIUS is up to, come to Philadelphia in September for the 11th annual North American Passive House Conference.