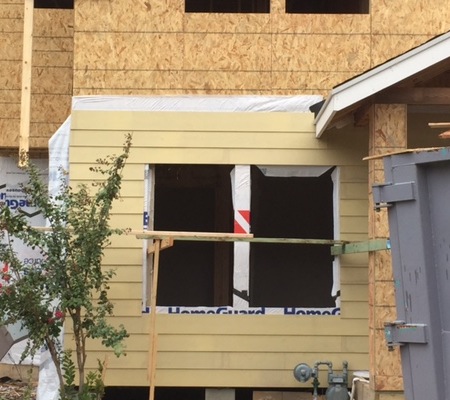 I see a lot of interesting stuff at construction sites and in people’s homes. I also see stuff I never got to see because people send me photos. I like photos! Remember that ice chest someone had incorporated into a duct system? That was sent to me. So are the first two photos below.

See anything missing there? Oops! They started installing the siding before the windows were in. Even worse, they didn’t leave enough space to install the windows there. I actually got to see this house a few weeks later, and they’d had to go in and cut the siding back around the whole opening to make it work.

The photo below shows the opposite side of the same problem. Instead of waiting too late to install the windows, they installed them too early. Then someone realized they’d forgotten to install their main liquid water control layer, the drainage plane. (Well, we can hope they didn’t think of the house wrap as a vapor barrier, can’t we?) The problem with just taping it from the outside is that you’re relying on two things: (i) The tape will be installed properly and last a long time, and (ii) no water will get behind the house wrap.

Tape can and does last, when you use the correct type and install it properly. But water has a tendency to get into all kinds of places it shouldn’t oughta go. If you don’t shingle the materials so that they shed water away from materials that are susceptible to moisture damage, you make it more likely that water will get in. Installing the house wrap after the windows means that it’s impossible to shingle it properly.

Here’s what you want your house wrap to do around windows. One of the biggest lessons I learned when I was building a house was how important it is to do things in the right order. At best, you get lucky and it doesn’t matter. Sometimes, it means extra work but you can still end up where you want to be. Other times, it can spell trouble for the future because of the compromises made.

The builder of the home in that second photo certainly didn’t want to pull all those windows out and then install the house wrap to be able to get the flashing details right. But that’s really the only option there if they want to prevent the future homeowners from having to deal with the moisture problems caused by the mistake.

As painters in the 1930s found out, insulated buildings don’t dry out so well. When water gets in, it stays in and wreaks more mischief. Doing things in the right order and understanding moisture management is not optional anymore.