Mind the Gap - Air Leakage at the Top Plates

Most houses in this part of the world are 'stick-built.' That is, they're framed with 2x4s - sticks. This term came from the timber framers who were used to building with massive posts and beams. When smaller lumber became available in the 19th century, the timber framers derisively called them 'sticks' and the method of constructing houses out of them, 'stick building.'

Today, most people in the construction industry use the term stick-building (without its negative connotation) to distinguish it from other methods, such as masonry, adobe, insulated concrete forms, and structural insulated panels. In a stick built house, each framed wall has vertical framing members (studs) between the horizontal members (plates).

It's the plates at the top that concern us today because they happen to be the source of significant air leakage in homes. When the drywall crew comes in, they do the ceiling first. When they push the drywall toward the plates, they leave a gap to prevent damage from thermal expansion and contraction.

In most houses, that gap doesn't get any kind of air sealing, so attic air can leak into the house or conditioned air can be pulled into the attic, depending on the pressure differences. You might think it's not a big deal because it's such a small gap in most places, but you'd be wrong.

That small gap often runs for hundreds of feet in a typical house. It's on both sides of each top plate, and you have top plates on every wall, both interior and exterior. Let's say you've got an average of an eighth of an inch gap that runs 300 feet. That comes out to a hole that's more than 3 square feet!

Go to one of your standard size double hung windows and open it one foot. Leave it open 24/7 every day of the year, and that's what kind of air leakage you're getting from that top plate gap. Actually 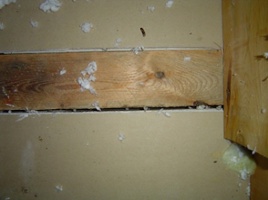 in the summer it's worse than that because air leakage from the attic brings in hotter air than air leaking in through an open window.

If your home has this kind of air leakage, it's easy to find. Just go up in the attic, pull back the insulation, and find the top plates. The photo at left shows a typical one - flush drywall on one side and a big gap on the other. To fix it, you just fill the gap with caulk or spray foam. I can tell you from lots of personal experience that it's not fun work, especially at the eaves in a house with a low pitch roof.

In new construction, it's much easier to deal with. It almost never happens, but it would be so easy. After the drywall hangers get the ceiling done, they come back and do the walls. Occasionally they'll put adhesive on the walls, but usually they'll glue only the studs, not the plates. If they'd simply run a continuous bead of adhesive on the top plate, too, they'd block the pathway for air to move between attic and walls. So simple a solution. So much easier than going up into the attic afterward.

Another solution would be to buy a green modular home. Modular construction avoids the top plate gap by having continuous sheetrock across the ceiling 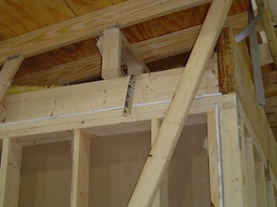 . The ceiling panel is framed and sheetrocked before being set on top of the walls. If you look carefully at the photo at right, you'll notice a white band between the wall and ceiling framing. That's the drywall.

Of course, the best solution is just not to have an unconditioned attic. Frame the roof with structural insulated panels, or spray foam insulation between the rafters. If the attic is inside the building envelope, those top plate gaps don't matter.

Photo at top from centralwisconsinhabitat.org.

Allison, this is also true of concrete block homes, maybe more-so. The furring strips are fastened over the rigid insulation (or directly to the block walls if foil insulation is used). The top furring strip is not always tight to the top, and is usually not butted tight to the adjacent furring. We have professionals saying that the drywall mud in the ceiling/wall joint is enough to cover this gap. Florida Energy Code requires a "sealant" (not defined) at this joint, just as you stated, but I haven't seen a house done yet with any caulk. This would probably require an extra inspection. Any comments from the Florida builders?

its interesting how many contractors dont even think about air infiltration problems as far as the top plate issue a caulking and or gasket may be used but Energy Star says no to adhesive - Liquid nail not sure why plenty on construction site I believe they feel once it sets its to rigid to flex I have one customer that followed the process and what a good blower door result compared to the norm.- Mark Crawford IECC plans examiner/inspector/ HERS rater Texas