Posted by Allison Bailes on September 7, 2010

2005 was an important year for me. Not only was I learning how to do Manual J load calculations, crawl space encapsulation, and home performance contracting, but I also drank peak oil kool-aid by the bucketful. I read everything I could find on the subject, started writing and speaking about it, and even went to the very first ASPO-USA conference in Denver.

Even with all the scary talk about life in a post-peak oil world and how dire the situation is, however, almost none of the official speakers at the conference (or either of the next two, which I also attended) seemed willing to question the belief that underlies almost every discussion about economics - that economic growth must continue. 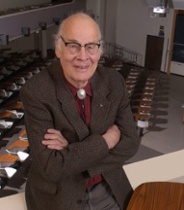 One of the people I talked with at that conference was Dr. Albert A. Bartlett, an emeritus physics professor from University of Colorado. I'd already met him 15 years earlier at the American Association of Physics Teachers conference in Minneapolis and loved reading his columns in The Physics Teacher magazine.

Not only was Dr. Bartlett willing to broach this subject at the conference, but he's been doing it for decades. Below is part 1 of his 8 part video series on exponential growth, a talk that he's given over 1600 times.

You can see the whole series on one page, too.

If you haven't yet considered where constant growth eventually leads, perhaps Dr. Bartlett's videos will open your eyes. We either can give up our attachment to constant economic growth willingly and learn how to create a steady state economy, or we can find out the hard way how not depend on economic growth.

"Anyone who believes exponential growth can go on forever in a finite world is either a madman or an economist."

Photo of logs from flickr.com, by Joost J. Bakker IJmuiden

Intelligent. Excellent. So great to see this get some of the attention it deserves. Bravo!

Here I am at fifty years old getting my college algebra done that should have happened years ago. We're just scratching the surface with exponential matters and rudimentary logarithms.

Even so, I get where Dr. Bartlett is going, what he is saying. The math supports what he says. Most everyone, in reaction to this, will just argue about nuances, as if such counteract what he's said, but nuances are distractions. The fact is we can't sustain unlimited growth with finite energy sources. The fact is we've built an entire infrastructure on finite energy, and when finite sources deplete, the infrastructure becomes unsustainable and worthless.

Years ago I was involved with a bunch of "back to the land" types who wanted to start a community of earth sheltered houses, grow their own food, and harvest wind and solar energy. The founder of two of these communities was a retired aerospace engineer. I'll never forget one thing he said, and it revolved around finite energy discussion: All things done are a net energy loss. Meaning even as we seek to improve energy efficiency and reduce energy consumption, we consume finite energy to make that happen. It is absolutely unavoidable. Had I followed through on my own earth sheltered design, it would have fallen exactly in line with the engineer's statement. While the house may have used far less energy over its lifetime than a stick-built house of equivalent footprint, to build it required finite fuel, a net energy loss.

Therefore, how I see it, zero population growth, steady state economics, and renewable energy are the triune requirements for long term sustainability of the human race. Pretty sobering, yes?

Allison,
Your website is one of the best I have found in a long time. I've often wondered how economists can say that the economy needs to continually grow when the planet doesn't continually get bigger. Who do they think they are kidding? I never believed it. Nice to see others have figured that out. I'm looking forward to a stable state economy.

What Cameron points out though is a reality that is a stumper in developing sustainable anything. If the energy required to build or retro fit something exceeds the energy saved by the "new" efficient system, are we really saving energy? How do we figure that out?